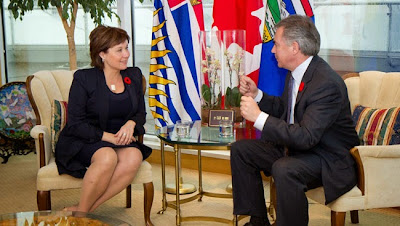 British Columbia's political leadership, Liberal premier Christy Clark, and NDP opposition leader - some guy named Hogan, no, umm Horgan - have their sights on the new meat next door, Alberta premier Rachel Notley.  They each want something from premier Notley and it looks like they're not going to be too discrete in going after it.

Christy does not want to be left in Notley's shadow, a challenge that won't be made easier by her whole hearted support of defeated Tory premier Jim Prentice throughout the Alberta election.

Clark thinks it would be "fantastic" if Alberta "joined" BC's carbon tax initiative, maybe like a junior partner or a complete toady.  She thinks that she and Notley can also get pipeline pariah, Kinder Morgan, to straighten up and fly right.

NDP leader Horgan, it seems, just wants to rub Notley all over himself and bask in her glory.  In case you haven't heard, BC's NDP threw themselves under the dock in our last election and they're still waiting for the tide to come back in and float them off the rocks.

“Now I’ll be able to call the premier of Alberta and say: ‘Hey, how’s it going?’ I wasn’t able to do that yesterday.”

Uh, yeah Jim - what, it's John? - yeah John, I'm sure Rachel will be racing to pick up the phone whenever you call.  Maybe she'll even give you a phone number that works.
Posted by The Mound of Sound at 9:29 AM

Who would have thought that Alberta would lead themselves and possibly Canada out of the political darkness of government maleficence, incompetence, cronyism and entitlement?
It appears Prentice brought the Harper rot with him from Ottawa and the stench was too much for even Alberta. Now… about BC?

When the two premiers meet for the first time it definitely won't be a meeting of the minds, Christy will be at a distinct disadvantage.

"In 1994, Notley moved to Vancouver, British Columbia, where she worked for the Health Sciences Association of BC as their occupational health and safety officer.[11] During her time in BC, she worked for one year as a ministerial assistant to the provincial Attorney General.[12] In this role, she was part of the team that first expanded the application of BC's family relations laws to same sex couples, several years before the Government of Canada took similar initiatives.

Notley acted as a representative of the provincial labour movement in the negotiation and drafting of new workplace health and safety standards.[1]

During her time in Vancouver, Notley was active with “Moms on the Move”, an organization that advocated for the rights of special needs children. She is also a past board member of the Vancouver Community College.[7] Notley returned to Edmonton in 2002."

From her Wikipedia page...

She has a pretty good grasp of BC's fucked up political culture, I'd wager.

She'll have no time for either of them.

Dana - I'm hoping, I'm hoping. If we're lucky she'll waste no time putting Crusty in her place. As for Hanger-on Horgan, well at least he's harmless. Then again maybe she can teach the BC opposition to stand up on their hind legs.

Anon - I hope and pray that Notley starts drawing a few lines in the sand for Crusty. I'd like to see both of them bury Northern Gateway forever.

I have met Ms Notley and voted for her. She isn't anyone's fool and has a lot of younger members who are well informed regarding the environment. She will do for the province of Alberta exactly what is need and she will listen to the people and their concerns. Not only that, Ms. Notley and her crew have learned from other failed NDP governments.