The Deadly Delusion of 2C 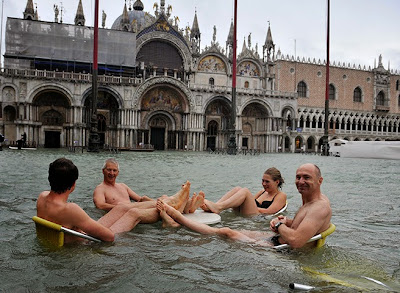 It sounded like a plan back when they came up with it.  World governments would do whatever necessary, mainly slashing carbon emissions, so that we might limit global warming to no more than 2 degrees Celsius by 2100.  That, we were told, would give us a reasonable chance of avoiding catastrophic, runaway global warming.  It wouldn't guarantee us anything.  It would just give us a reasonable chance that life as we know it on Earth would survive - somehow.

Science marches on, always discovering new things, correcting old assumptions and such.  The Kyoto Protocol came in 1997 but in the nearly two decades since a good many scientists have come to new conclusions about the 2C target.  They think that we're screwed if we get to 2C.


The aim to limit global warming to two degrees of pre-industrial levels is "crazy" and "a prescription for disaster", according to a long-time NASA climate scientist.

The paleo-climate record shows sea-levels were six to eight metres higher than current levels when global temperatures were less than two degrees warmer than they are now, Professor James Hansen, formerly head of NASA's Goddard Institute for Space Studies and now at Columbia University in New York, said.

"It's crazy to think that 2 degrees celsius is a safe limit," Professor Hansentold RN Breakfast on ABC Radio on Tuesday, adding that this would lock in several metres of sea-level rise by the middle of the century.

New satellite data over the past decade indicate that the ice sheets are disintegrating faster than had been modelled by climate scientists.

"The ice sheets are losing mass faster and faster, with a doubling time of about 10 years," Professor Hansen said. "If that continues, we would get sea-level rises of several metres by 40-50 years."

"The consequences are almost unthinkable. It would mean that all coastal cities would become dysfunctional," he told ABC Radio.

The good news is that is what may lie in store for us in 40 to 50 years by which time a good many of us will be in dirt nap mode.  The bad news is what we can expect over the next ten or twenty years.  It's a question of resilience, the flip side of vulnerability.  You don't need metres of sea level rise to send an economic and social tsunami through our civilization.  A lot of cities are just inches above sea level at high tide.  Some - New Orleans and London (Richmond, BC) - are already well below sea level.  America's eastern seaboard is full of places that already flood or nearly flood on the high tide.  The oceans are warming causing sea water expansion.  The ice caps are melting.  Compound that with more severe storms, storm surges, and seawater inundation of coastal freshwater resources and you've got a serious problem on your hands.

In many places we'll have to retreat from the sea and then we'll have to deal with the economic dislocation and the enormous challenge of resettling our very own internally displaced populations.  At least we'll have plenty of high ground to retreat to while other, less fortunate and more vulnerable places - think Bangladesh, Tuvalu etc. - will simply disappear.

Reminds me of a TV show I stumbled across recently.  I think it's called "bargain beachfront property."  As I looked at some of the properties shown I couldn't help but notice how many of them are just inches above sea level.  Oh well, oh dear.
Posted by The Mound of Sound at 9:45 AM

"The greatest shortcoming of the human race is our inability to understand the exponential function."

THE MOST IMPORTANT VIDEO YOU'LL EVER SEE!

As with everything else, the exponential function applies to Global Warming. Essentially, it is accelerating. The more we add to the problem the faster it grows. We are going to get to the edge of the cliff much faster than we think and then it will be to late to throw on the brakes.

True enough, Toby. Ten years ago I thought it would be mid-century before we were where we are today. Yes the onset is coming faster than we imagined. The science types are the first to admit they got it wrong, their forecasts were too rosey. I wonder what role the Cassandra complex played in that.

The IPCC, so maligned by the Right, has been a great disappointment. The Achilles' Heel is its consensus format that allows well placed denialists to force the panel to dilute its findings. This does not auger well for the coming decades.

We're already massively behind in replacing and upgrading our essential infrastructure to meet this new Anthropocene epoch. The stuff we rely upon, the roads and bridges and rail lines that form the arteries of our society, were designed and built for an earlier era with a different, less challenging climate.

We flatly refuse to invest in the future and those who follow will pay dearly for that.

Our very economic model, neoclassical and perpetually growth-based, is the societal equivalent of a 3 pack a day habit and we will not let it go.

"The stuff we rely upon . . . were designed and built for an earlier era with a different, less challenging climate."

And for a much smaller population. I can't think of any solutions at all that adequately satisfy the needs and desires of seven billion people.

I don't think we have much chance at all of averting some mass die-off, Toby. It's a bitter irony for the Third World that the developed economies primarily responsible for this new climate are also those at the latitudes best suited to enduring the coming changes.

Oh well, there is a theory that intelligent life is self-extinguishing. Barring some global epiphany it seems we'll be putting that to the test.

This all makes me nostalgic for the 60s when all we had to worry about was being turned into glass by Soviet nukes.