Why, I Could Be Every Bit as Big A War Criminal as My Brother, George. 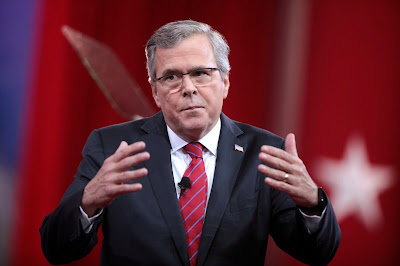 And they say Jeb's the bright one.

“I would have [authorised the invasion], and so would have Hillary Clinton, just to remind everybody,” Bush told Fox News television in an interview to be aired late on Monday. “And so would almost everybody that was confronted with the intelligence they got.”

Of course Jeb conveniently overlooks that the "intelligence" was a compendium of fiction ginned up by his brother's administration.  He also seems to have forgotten that the teams of UN weapons inspectors under Hans Blix scoured every potential WMD site the Americans could think of and reported there was nothing to be found.

Jeb also seems to have left out the part about how he's surrounding himself with many of the same advisers who so ably assisted George w. Bush to build a phony casus belli against Iraq.

For the ultra-conservative mentality that fears change, Mound, this proclamation by Jeb will be very reassuring.

The scary thing is, Lorne, that he has absolutely nothing to fear from this. I think Andrew Bacevich is right when he says that America desperately needs to reinstate the draft to raise the armies required for these foreign fiascoes. So long as the public is isolated from the warfighting it buoys support for Chickenhawks like Bush.

The other scary thing is that he's perfectly right about Clinton.

Oh no! Not again!