Now, Sit Still While I Shoot You Down 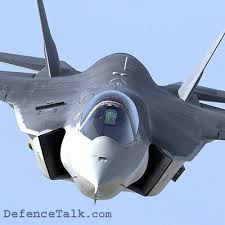 Lockheed has spent years, many years, telling the world that its F-35, supposedly stealthy, light attack bomber is unlike any warplane in the sky today. Turns out they're right.

Recent reports have focused on how 'buggy' the F-35's software, unmatched in complexity, is turnout out to be. While the US Marine Corps may have declared the F-35 operational, apparently the USMC hasn't let the all-important software in on that secret.

A new report from the Pentagon's director of operational test and evaluation released to Aviation Week paints another unflattering picture of the Joint Strike Fighter in action.

...the DOT&E states that “the F-35B Block 2B aircraft would need to avoid threat engagement… in an opposed combat scenario, and would require augmentation by other friendly forces.”

Giving more details on the software deficiencies mentioned in a December memo, ...11 out of 12 weapon delivery accuracy (WDA) tests carried out during Block 2B developmental testing “required intervention by the test and control team to overcome system deficiencies and ensure a successful event,” Gilmore says that the F-35’s performance in combat “will depend in part on the operational utility of the workarounds” that were used in testing.

At the root of the difficulties in the WDA tests, Gilmore said, was that component tests in the run-up to the WDA events were focused “on contract specification compliance, instead of readiness for combat.” Those tests required only that the subcomponent should work. The actual WDA tests involved the entire kill chain and “highlighted the impact of deficiencies.” The F-35 program leadership altered some of them to achieve a “kill” – for example, by restricting target maneuvers and countermeasures.

Specific technical problems continue to impose speed and maneuver limitations on the F-35, the report says. The weapon bay temperatures exceed limits during ground operations at on days warmer than 90-deg. F, and at high speeds below 25,000 feet, if the weapon bays are closed for more than 10 min. (The F-35 is not stealthy with the doors open.) On the F-35A, the time limit is applied at speeds from 500 to 600 kts, depending on altitude.

Overall, the report says, “the rate of deficiency correction has not kept pace with the discovery rate” – that is, problems are being found in tests faster than they can be solved. “Well-known, significant problems” include the defective Autonomic Logistics Information System, unstable avionics and persistent aircraft and engine reliability and maintainability issues.

Combined with poor aircraft availability, this record leads DOT&E to conclude that the program cannot speed up flight testing enough to deliver Block 3F – the IOC standard for the Navy and export customers and the exit criterion for the systems development and demonstration (SDD) phase – on schedule. Block 3F developmental flight testing started 11 months late, in March 2015. The planned 48 WDAs in Block 3F – most of them more complex and challenging than the Block 2B weapons tests – cannot be accomplished by the May 2017 schedule date “unless the program is able to significantly increase their historic completion rate.”

What this means for Canada is that, if a competitive fly-off exercise was held today or next year or the year after that, the F-35 would probably be self-eliminating. The less-costly, less-sparkly, more capable alternatives are all flying and in service around the world. They can be at Cold Lake tomorrow to strut their stuff. The F-35 has never gone head to head with the competition and that's because it is years away from that level of development. Meanwhile the F-35's electronic wizardry just gets longer in the tooth with each passing year.

Is there any chance at all that Trudeau and company will ditch this lemon?

What Canada needs is a fresh homeland defense strategy. We can't defend our own borders but we keep sending our meagre forces to fight silly wars against foes we cannot beat.

No, he won't be ditching any lemons because lemons to him and his government are only ways to prove their lemonade making skills.

Just like selling arms to tyrants with a big smile.

At this point I do hope that more objective considerations prevail....perhaps they need the 'mound' as a "consultant"?


All we need do is convene a 5-day "fly off" competition using Cold Lake and the nearby Primrose Lake range. Put the entries through their paces on a grueling schedule of patrol/intercept, air superiority, ground attack, and tactical bombing missions that task the competitors with two to three missions per day. Gauge how they perform each role and how they do overall, especially on sortie generation. Just because you dominate one area it's not significant if you have to spend the next two days in the hangar instead of being available for additional missions.

As I said we could issue notice of the fly-off for the end of 2017 to mid-2018 and see which aircraft are ready to show up to be judged. I know one that almost certainly would be a "no show."