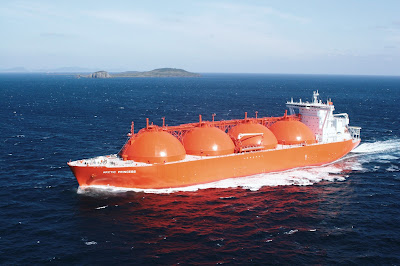 Fossil fuels come in a range of flavours - gas, coal, oil, bitumen - but their days are numbered.

Supposedly one of the cleanest, natural gas, is the subject of a new industry report that renewables pose a mortal threat to the viability of LNG projects.


The sheer volume of shale gas in North America has blinded many of its key promoters to an important dynamic: "Namely the fast progress of renewable energy technologies capable of providing an alternative to one or more of the major sources of demand for LNG, electricity production and in the future perhaps heating," the report found.

The report was prepared by the Brattle Group, an independent firm that "answers complex economic, regulatory, and financial questions for corporations, law firms, and governments around the world."

...To date, not one of the LNG export projects proposed in Canada has gone to the construction phase, "which provides further evidence of the uncertain need for North American LNG," the report says.

It warns that investors should not regard the LNG glut as a temporary matter, because the declining cost of wind and solar energy combined with their rapid adoption in many jurisdictions such as Germany and China could significantly dampen global demand for methane as well.

BC premier Christy Clark will probably shrug off this warning as she has others before it. To her, maintaining the illusion of a bountiful LNG industry has a political value that eclipses reality.

The B.C. government once based its controversial advocacy for LNG on rising Asian gas prices, which at one point exceeded $15/MMBtu several years ago. But they have now collapsed to roughly $6 to $7/MMBtu.

LNG projects can't be profitable without prices being around $11 because of the high cost of extracting and fracking shales in northeast B.C., analysts say.

The report has to be unsettling news for all high-carbon, high-cost fossil fuels including Athabasca bitumen.

When I look at the energy, environmental, safety and financial costs of shipping LNG from BC:

it doesn't make any sense.

Yet our govt keeps pushing it.


As I tried to indicate, Hugh, I think the illusion of a bountiful LNG future still has great political value to Christy Clark even if it has become economically impossible.

To limit global warming coal used for industrial heating/power generation should be phased out immediately and replaced with LNG which would in term boost prices of LNG. Good luck with "immediately."
A..non

Anon, ten years ago I would have agreed with you. Today all carbon burning needs to be phased out.

I think even Alberta is en route to ending coal powered utilities. That, however, still leaves the Maritimes.

Natural gas is cleaner than coal provided leakage isn't factored in. Studies have shown that the amount of natgas (methane) that escapes into the atmosphere is substantial, enough to make the gas option even worse for greenhouse gas emissions than coal.

Toby is right. All fossil fuels have to be phased out and quickly. The highest-carbon fuels need to be sequestered first and that means bitumen.

Any gains that might have resulted from the use of (so called) natural gas in the climate change equation, are being quickly negated by the monstrous "leak" in California! And, I'm sure that you are aware, that even in the best of times loses of NG from traditional leaks, makes it somewhat problematic, as to its actual benifites. Of course, it's still better than coal, although with California still spewing untold quantities of NG into the atmosphere. ......?

Reducing fossil fuels would slow the GDP, so I don't see the govt doing much.