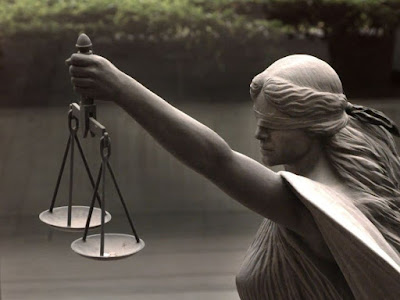 Then again, the United States is no democracy either so why should the US Supreme Court be held to the standard of a court of law?

The Republicans, including that thug in the White House, are utterly shameless when it comes to stacking the deck of justice. They pride themselves on perverting the highest court of the land by appointing reliable justices to advance their rightwing and corporatist agenda. And, by and large, the greater collective of idiots, also known as half of the American people seem just fine with the idea that their judicial system should be so profoundly corrupted.

In the States it's not just politics that is divided right and left. So too is the judiciary and the rule of law. Citizens United was a consummate expression of judicial corruption.

Justice, as revealed in the statue (above) of Themis in the Vancouver Law Courts, is supposed to be blind, serving the poor and the rich, conservative and liberal, without distinction or bias.

Kavanaugh was not nominated to fill Anthony Kennedy's curiously engineered retirement because he was an outstanding legal mind. He was chosen for his record as a Republican operative who would be politically reliable on the USSC bench.
Posted by The Mound of Sound at 4:20 PM

Kavanaugh made enough angry, strident statements to pass an audition for Limbaugh's job. But, I've seen plenty of those moments from sitting judges before.

What I've yet to see is a judge ranting on in a public forum about "the Left," "Borking," "revenge on behalf of the Clintons" or whatever the Canadian equivalents might be. Even the most biased judges are normally concerned about the appearance of impartiality. It's hard to see how a civil rights plaintiff, criminal accused or abused worker could ever expect a fair hearing from this angry, right-wing partisan.

What everyone saw today should be the end of his judicial career. If he gets on the SCOTUS bench, the country's toast.

.. I stumbled across this late last night via Twitter, Mound - This morning I made sure to get more informed re the article. I found it is an edited chapter from Michael Lewis and his book The Fifth Risk. He has a very unusual talent for telling factual stories, somehow 'taking you there' while bringing the moments back to life. (I'll explain my point below, after the link)

I had a crazy day yesterday & was unable to update re the Kavanaugh debacle till quite late, when the media dust had settled. But I understand it was the complete shitshow I thought it would be.. and then some. The spectacle of GOP's unhinged power faction, charged with ramming Kavanaugh through - is what is is, it is who and what they are - thus they are writing themselves into the history books. Lindsay Graham, the troglodyte Orrin Hatch etc showed exactly what they are made of.. and later, Strump himself chortled how wonderful it all was. So that's a huge example of how ethically and morally corrupted, the 'machinery' and men of the GOP have become, now they have gained control of Congress and Senate.. and they want the Supreme Court.

Flash back in time via the link & Michael Lewis .. to a stunned group watching as the election falls to Trump.. and the inanity of the strange 'machinery' and men of Trump's bizzaro world..

Now, two years in.. 'building' (I use the term lightly) on the foundations or failures of TrumpWorld and its hysterical historical liar loser.. came the various attempts at political power & larger fame.. until the catastrophic freak show of this last American Election. This is where the linked chapter lives & breathes. The Trump Transition Team. It takes your breath away to see it brought to life.. and what it is aiding and abetting as an administration.

Where is it going next, how bad can it get? How completly insane ? I assume Michael Lewis presents a tour de force via the entire book. Like Jon Krakauer another fave of mine, the absolute gems they deliver, may shock, frighten, inspire.. but they give me something to clear my head with.. fresh air, ideas.. and I love knowing that exemplars like them are also seeing & writing 'The History' .. and not just the disgusting losers and creeps get to 'write history'

This is not new. The U.S. hasn't had a functioning judiciary in this century. In Bush Vs. Gore, (remember the hanging chads?) the Florida Supreme Court was asked by the Republicans to issue an injunction to stop a recount. In order to do so, they had to find that Bush would suffer an irreparable harm without the injunction. They issued the injunction. The harm that he would suffer?
...That the recount was likely to reveal that he had lost.

As Lily Tomlin said: "No matter how cynical I get, it's never enough to keep up."

It's clear that Republican senators -- and their nominee -- don't understand how much the world has changed. Rest assured that revenge is coming -- and it will be served cold.