Will Donald Trump Go the Way of Captain Ahab? 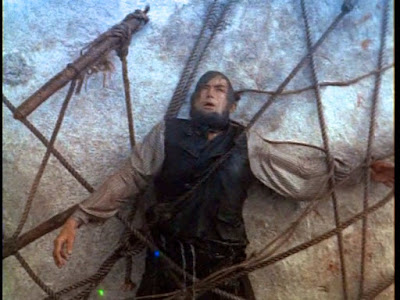 It was one of Gregory Peck's greatest roles; Captain Ahab in Moby Dick. Obsessed with killing the great white whale, Ahab was caught in harpoon lines and the whale dragged him to his death beneath the sea.

The American economy stands to be Donald Trump's Moby Dick and may bring him to a similar fate.

Trump has lashed himself to the economy, taking credit, every ounce of credit, for an economic turnaround engineered by Barack Obama. The irony is that what Obama wrought, Trump is working to wreck and that may backfire on him before the 2020 election.


Goldman Sachs predicted this year's U.S. fiscal outlook will be "not good" and U.S. household debt has been increasing since the 2008 housing crisis led to American taxpayers bailing out the big banks.

In 2018, experts say a $247 trillion global debt will be the main reason behind the next cataclysmic financial crash. Additionally, low wages and the U.S. national debt's steady rise are expected to drag down the economy.

Economists downplayed recent positive indicators such as low unemployment and soaring business confidence, reiterating they won't last through Trump's first term. At least one expert predicted that recent slides in housing and auto sales are perhaps the first step toward a U.S. recession.

Murray Gunn, chief of global research at Elliott Wave International, [said], "We think the major economies are on the cusp of turning into the worst recessions we have seen in 10 years. Should the [U.S.] economy start to shrink, and our analysis suggests that it will, the high nominal levels of debt will instantly become a very big issue."

Experts cautioned that several economic markers have gotten much worse in the past decade, particularly in regards to borrowed money. The U.S. household debt of $13.3 trillion is now far worse than it was during its 2008 peak, due primarily to mortgage lending.

Central bankers have also more than doubled global debt as they have flooded national economies with cheap and easy money. In 2008, global debt sat at $177 trillion in comparison to $247 trillion today.

“We won’t be able to call it a recession, it’s going to be worse than the Great Depression,” economic commentator Peter Schiff said. “The U.S. economy is in so much worse shape than it was a decade ago.”

A widespread drop in spending and income means that default rates will likely worsen in coming years. Schiff also blamed the U.S. Federal Reserve and other central banks in part for the impending crisis.

“I think we are going to have a dollar crisis — you think the Turkish lira looks bad now, wait till you see when the dollar is imploding and we have a sovereign debt crisis in the US,” he told the Post. “The U.S. government is going to be given a choice between defaulting on the debt, or else massive runaway inflation.”

There have been many experts coming forward lately to warn of a looming economic collapse. The next one, they claim, will be more devastating than the Great Recession of 2007-2008. They contend the world is more vulnerable, less able to respond cooperatively in no small part due to the divisions Trump has created with his trade wars. Compounding that is fiscal weakness. Nations no longer have the funds to bail out critical economic players such as banks. If/when they go down again they're on their own.

Which brings me to a point Kevin Phillips drove home in his 2005 book, American Theocracy.  One chapter traces the eerie similarities in nations that rise to become globally dominant and then fall into decline as their successor takes over. This is rooted in the 'financialization' of the dominant economy that occurs when finance, insurance and real estate replaces manufacturing and trade as the nation's economic engine. This leaves the nation's economy brittle and very susceptible to recession. The low but stable return of the manufacturing economy bounces back to recovery much more quickly than the FIRE economy. Worse still, the FIRE economy has much greater difficulty recovering with each successive recession until, eventually, it effectively collapses.

America could be at or at least nearing that point. The ironic part is that Trump prides himself on his trade wars and his reckless tax cuts for the rich that have both defunded government of essential revenues and driven the annual deficit through the trillion dollar mark for the first time. Trump has engineered a fiscal nightmare for the United States. Trump's Gullibillies will be first to the chopping block.

Trump has lashed himself to a whale of his own making.

You say all that like it's a BAD thing. The sooner America collapses, the sooner our horrid war machine will be put out of business for good.

That Obama engineering was great for Larry Summer's friends, not so good for East St. Louis. Economic results rather akin to the downstream effects of his Nobel.

Those who refuse to learn from history . . .