What is Ford's Problem? I Don't Get It. 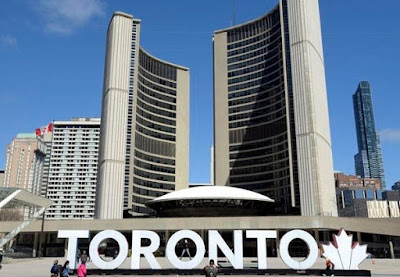 One of my first assignments as a fledgling reporter in Ottawa in the early 70s was to cover the local municipal governments, the City of Ottawa in particular.

Back then they had a mayor, a deputy mayor, alderman for every ward and an executive council called the Board of Control. I looked it up online and found the city had 24 elected representatives on council. Ottawa back then had a population of about 300,000.

As I recall it the city government functioned quite smoothly. Debates were lively and constructive and, overall, congenial.

Toronto today has a population just shy of three million, ten times more populous than Ottawa in the early 70s. But Ford thinks Toronto can be adequately governed by culling council from 47 wards to 25 wards. That would make each ward councilor the reeve of a small city.

I don't know about Toronto politics but how in hell is that supposed to work to the benefit of the people of Toronto?

What is Doug Ford's problem?
Posted by The Mound of Sound at 4:43 PM

Ford's problem is that councillors wouldn't go along with the asinine projects that he and his brother cooked up, and this is his petty revenge. His backers are also pleased that he's reducing the number of palms they have to grease and the ability of councillors to listen to and champion the concerns of their ward residents. Win-win for developers.


What a FUBAR, Cap. Never thought I would see this in Canada. Was I wrong.

Too can say that again, Mound. Larger wards also mean greater fundraising required to get elected. This raises the bar for entry into municipal politics and ensures that councillors are more attuned to their donors. Government for the rich by the rich is where the express train is headed, in T.O. and everywhere else these days.

Interesting isn't it Mound, that if my old memory serves me correctly, it was Mike Harris, Conservative Premier of Ontario, who engineered the amalgamation into what is now the City of Toronto and its large contingent of council members. His rationale was that it was a more efficient arrangement and would cost less money. Others quietly opined that it was Harris, who was from northern Ontario, hated that it was the greater Toronto area that he felt got all the attention and money.

Now we hear the current Premier, also a Conservative, justifying a reduction in the size of council on the basis that its too expensive to support the present size. Will Conservatives ever make up their bloody minds, or is his head just parked in "I'm getting even now" mode?

I was working in the BC Govt when Harris was running things in Ontario and when we posted a couple of Policy positions, we received a huge number of applications from members of Ontario's civil service. We did interview a few and almost all of them referred to Harris as "Mike, the Knife" and not in an affectionate way!

Bigger government means less accountable government. Here in the U.S. the number of people per elected House member has gone from the 30,000 originally called for by the Constitution when the number or reps was capped at 435 in 1929, to around 750,000 today. No doubt that is a big part of the reason that, for example, my Democratic rep can get away with continually whoring for the Pentagon and Wall Street--not enough people pay attention to hold him accountable.

Obviously, what I meant was bigger legislative districts--sorry about that.

What is obviously needed is another Charter challenge based on "fair representation". The Judge referred to this in his many statements but it has to be clarified in law.

Here in the boonies, in our rural riding we have 52 elected pols in seven townships. How can we be entitled to more representation than a Citizen in Toronto?

As to saving money, how long will it be until the Councillor, representing 110,000 Citizens decides that effective representation means a constituency office the same size as the MP/MPPs?

Honestly, it's very depressing to see our democracy slip away like this. While I blame McGuinty and Wynne for pushing us all over the brink as voters, there's no doubt that Ford will pound, pound and pound again until we are beaten into submission.
Recent events and his vengeance against Toronto reveals a sad future for Ontario.

If you get out into the rural boonies in Ontario ll find a lot of it bears a striking resemblance to Dogpatch. That's about half of Doogie's constituency. The other half is the sociopathic rich. Marriage made in heaven. One half like to fuck their pigs and sheep the other half like to fuck everyone and everything else.