It's Going to Take More than Wind Farms 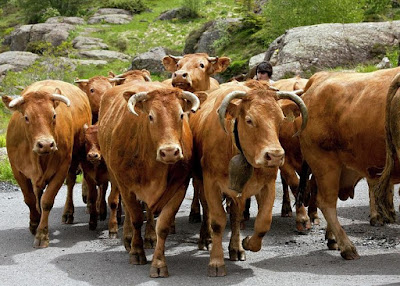 It seems like an impossible challenge. A new study contends that Europe's chance of meeting its greenhouse gas emissions targets will require that consumption of meat and dairy be scaled back, way back, by 2050. How far back? By half based on today's numbers.

Population may grow, wealth may increase, no matter. Meat and dairy consumption has to be throttled way back.


The study calls for the European commission to urgently set up a formal inquiry mandated to propose measures – including taxes and subsidies – that “discourage livestock products harmful to health, climate or the environment”.

Livestock has the world’s largest land footprint and is growing fast, with close to 80% of the planet’s agricultural land now used for grazing and animal feed production, even though meat delivers just 18% of our calories.

Can it be done? I suppose anything is possible but, once again, it comes down to public acceptance and a greatly shored up political will, so often found lacking these days.

Population has to be throttled way back. Other "solutions" are futile.
Some idiots not accepting that truth are occasionally so bright that they will retort to: you go first.


I think that's simplistic, Anon. Yes, population does have to be cut, perhaps by as much as two-thirds, but if we're to achieve depopulation peacefully it will require a great deal of cooperation among nations with very differing circumstances. If the overpopulated nations are going to trim their numbers it'll probably require some form of mass sterilization. Before they'll do that they will expect the affluent, less-heavily populated nations to massively slash our greenhouse gas emissions and come to some equitable agreement on resource access. Unfortunately there's little appetite for that sort of thing among the developed nations. Hell, we won't tolerate an extra 4 cents a litre at the gas pump.

Modifying cows diets and grazing patterns can reduce methane emissions by as much as 99.9%.

Unfortunately, a huge amount of Greenhouse Gas reductions can be made, but at the cost of Corporate Agribuisness's profits.

Reducing subsidies of cattle, too, would help. Again, a solution no politician has the lower half bodily functions to even think about.


I'm finding it increasingly difficult, Troy, to apportion fault. Jay points the finger at corporate agriculture and they deserve a good measure of blame. You fault the political class and quite rightly. But how much fault rests with us, the plebs, for our complacency? Suggest you want to hike pump prices by 4 cents a litre and they're threatening to storm the Bastille. I think we're all on autopilot.

Consumers can effect change. A&W switched to grass fed a long time ago, and when they introduced their meatless burger, they couldn't keep it in stock.

Economic's has an effect as well. When oil prices spiked, the ranchers had to change models. Instead of running breeder herds and shipping the 2 year olds off to feedlots, they had to keep them on grass, many culled their herds to the available grass. Now nobody ships to feedlots anymore, because you can lose $2k a cow once all the oil is added up. One of the biggest ranchers near me, switched to grass fed organic with a wine finish, ( pulp from the Wineries), and of course, get's premium pricing.

Regulation and Legislation would help, but with Industry Capture, we're not going to get that.

Did you know that There's This One Weird Trick, that can build active pasture land topsoil at up to 6 inches a year?

Individuals need to make choices to change. Then if we could reward those changes - in ways that people can see now - then maybe we can begin to make progress. What rewards? Not sure. But it has to be somehow obviously tangible and relatively immediate.

Okay, I'll play your game. What's "This One Weird Trick"?

Cross fence, rotational pasture, no grazing below 6 inches, rip half the grass out and plant herbs, perennials and wildflowers, tree's every 40 feet, worms, nematodes and soil bacteria, verge,

No chemicals no non-organic fertilizer.