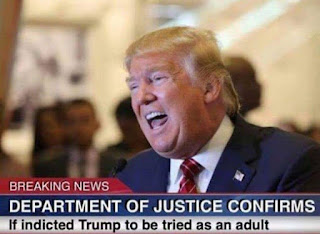 Big day for the New York Times. Bad day for the paranoid and delusional president of the United States.

The Times has taken the unusual step of publishing an anonymous op-ed from what the paper maintains is a senior official within the Trump White House. The piece is entitled, "I am part of the resistance inside the Trump administration."

The Nanny State appears to be alive and well within the White House where senior aides run about changing America's diapers as fast as the Mango Mussolini can soil them.


It’s not just that the special counsel looms large. Or that the country is bitterly divided over Mr. Trump’s leadership. Or even that his party might well lose the House to an opposition hellbent on his downfall.

The dilemma — which he does not fully grasp — is that many of the senior officials in his own administration are working diligently from within to frustrate parts of his agenda and his worst inclinations.

I would know. I am one of them.

To be clear, ours is not the popular “resistance” of the left. We want the administration to succeed and think that many of its policies have already made America safer and more prosperous.

But we believe our first duty is to this country, and the president continues to act in a manner that is detrimental to the health of our republic.

That is why many Trump appointees have vowed to do what we can to preserve our democratic institutions while thwarting Mr. Trump’s more misguided impulses until he is out of office.

The root of the problem is the president’s amorality. Anyone who works with him knows he is not moored to any discernible first principles that guide his decision making.

...In addition to his mass-marketing of the notion that the press is the “enemy of the people,” President Trump’s impulses are generally anti-trade and anti-democratic.

From the White House to executive branch departments and agencies, senior officials will privately admit their daily disbelief at the commander in chief’s comments and actions. Most are working to insulate their operations from his whims.

Meetings with him veer off topic and off the rails, he engages in repetitive rants, and his impulsiveness results in half-baked, ill-informed and occasionally reckless decisions that have to be walked back.

“There is literally no telling whether he might change his mind from one minute to the next,” a top official complained to me recently, exasperated by an Oval Office meeting at which the president flip-flopped on a major policy decision he’d made only a week earlier.

The erratic behavior would be more concerning if it weren’t for unsung heroes in and around the White House. Some of his aides have been cast as villains by the media. But in private, they have gone to great lengths to keep bad decisions contained to the West Wing, though they are clearly not always successful.

It may be cold comfort in this chaotic era, but Americans should know that there are adults in the room. We fully recognize what is happening. And we are trying to do what’s right even when Donald Trump won’t.  The result is a two-track presidency.

Take foreign policy: In public and in private, President Trump shows a preference for autocrats and dictators, such as President Vladimir Putin of Russia and North Korea’s leader, Kim Jong-un, and displays little genuine appreciation for the ties that bind us to allied, like-minded nations.

Astute observers have noted, though, that the rest of the administration is operating on another track, one where countries like Russia are called out for meddling and punished accordingly, and where allies around the world are engaged as peers rather than ridiculed as rivals.

On Russia, for instance, the president was reluctant to expel so many of Mr. Putin’s spies as punishment for the poisoning of a former Russian spy in Britain. He complained for weeks about senior staff members letting him get boxed into further confrontation with Russia, and he expressed frustration that the United States continued to impose sanctions on the country for its malign behavior. But his national security team knew better — such actions had to be taken, to hold Moscow accountable.

Given the instability many witnessed, there were early whispers within the cabinet of invoking the 25th Amendment, which would start a complex process for removing the president. But no one wanted to precipitate a constitutional crisis. So we will do what we can to steer the administration in the right direction until — one way or another — it’s over.

The bigger concern is not what Mr. Trump has done to the presidency but rather what we as a nation have allowed him to do to us. We have sunk low with him and allowed our discourse to be stripped of civility.

Senator John McCain put it best in his farewell letter. All Americans should heed his words and break free of the tribalism trap, with the high aim of uniting through our shared values and love of this great nation.

We may no longer have Senator McCain. But we will always have his example — a lodestar for restoring honor to public life and our national dialogue. Mr. Trump may fear such honorable men, but we should revere them.

There is a quiet resistance within the administration of people choosing to put country first. But the real difference will be made by everyday citizens rising above politics, reaching across the aisle and resolving to shed the labels in favor of a single one: Americans.

"It’s a bit of a challenge to understand the motivation behind the piece. The author seems determined, for example, to reassure the public that there’s a structure in place to contain Trump’s madness and prevent him from doing catastrophic harm.

But there’s nothing heartening about these circumstances. If the author is correct, the nation is being led by a man who is clearly unwell.

He/she acknowledges some behind-the-scenes chatter about a 25th Amendment solution, which was dismissed to avoid a “constitutional crisis.” But the fact of the matter is that if the head of a global superpower’s executive branch is unstable, and White House decisions are being made by an unelected and unaccountable team of aides who are circumventing and undermining a mad president, that is a constitutional crisis.

I realize a parlor game will soon take root, and the search for the op-ed’s author will be intense. But at least for now, the genuinely scary message seems more important than the messenger."

- it's also a Begging the Beltway for Good Conduct Medals post Insane Clown POSus, while light treasoning, rather than heavy treasoning,

And that shows how venal the ReThugs, God Botherers and kkkonservatives have become.

That about sums it up, Jay. Trump's officials are trying to avoid the crisis in the GOP that would be triggered if they followed their constitutional obligations.

If they moved to remove the Velveeta Vulgarian under art. 25(4), he and his Trumpanzees would yell "coup!" Trump would force a vote in the House and Senate that would divide the party into Trump deadenders and Pence loyalists. Whatever they outcome, the party would be in total disarray. Worse, it would be an own-goal that couldn't be pinned on the Dems. That's what worries GOP officials the most and as always they put party before country.

On the bright side Cap, we now know that Navarro is the Trade Warrior, and Cohn's the sane one, that both are traitor's to their country, so a couple small bribes and a little bit of CSIS blackmail, and Canada can have anything they want.

Except Cohn's gone back to the mother ship at Goldman Sachs. That leaves the loony Navarro minding the shop.

Great, less work for CSIS and less money in bribes.

"“Machine Gun” Bill McGuire, the leader of the gang of hardened criminals currently robbing the First National Bank, is facing a test to his leadership unlike any faced by a modern American bank robber.

It’s not just that the building is surrounded by police officers. Or that he’s running out of hostages to bargain with. Or even that the sentries he posted in the loading dock don’t seem to be responding over their walkie-talkies anymore.

The dilemma—which he does not fully grasp—is that many of the senior henchmen inside his own gang are working diligently from within the bank to paint ourselves as heroes in the press while continuing to stuff our duffel bags with as much money as we can grab.

I would know. I am one of them.

To be clear, ours is not the popular “police department” of the government, the one that enforces the laws against robbing banks. We want the robbery to succeed and think that the part where we made the bank clerks hand over all the money in their drawers at gunpoint was a step in the right direction.

But we believe our first duty is to make it out of the bank alive so we can spend the money we have stolen, and “Machine Gun” McGuire continues to act in a manner that is detrimental to our escape."

"... many of its policies have already made America safer and more prosperous."

I so admire the buried assumption: unexamined, undiscussed and untested; but repeated at every opportunity, however unrelated the context.

Not that this particular resister may be anything but sincere, but Chomsky may have been right:

"But from the point of view of US elites, he's giving them everything they want. … Trump's role is to ensure that the media and public attention are always concentrated on him. … And in order to maintain public attention, you have to do something crazy. Otherwise nobody's going to pay attention to you. … So every day there's one insane thing after another. … And while this show is going on in public, in the background the wrecking crew is working. … What they're doing is systematically dismantling every aspect of government that works for the benefit of the population. … And all efforts are being devoted, kind of, almost with fanaticism to enrich and empower their actual constituency, which is super wealth and corporate power, who are delighted."


So let's keep throwing another dead cat on the table every few hours and we'll see what happens. Meanwhile, let's pull another fixer out of drawer, one that hasn't been indicted and isn't being investigated yet, to arrange for the payments to Black Cube. We can't risk any deep state interference in the neutralization of the traitors.

I agree with John B.

"The anonymous op-ed in the New York Times Wednesday that described a White House in meltdown was not an act of courage. It was a piece of moral cowardice of the worst sort."
"The conclusion is that the more corrupt sections of the ruling US business classes are perfectly willing to use Trump to achieve their Libertarian paradise of no taxes on the rich and their praetorian paradise of a military potlatch. "
"They are managing and manipulating the idiot president and achieving their fondest goals of looting the country.
The op-ed isn’t treason to Trump. It reveals that the Trump administration is committing treason toward “We the People.” "

This is the start of the "we only worked for Trump because we were patriots trying to save the country" narrative. Anonymous is spineless & self serving. They helped create the crisis. If all these spineless "heroes" took a real stand this crisis would be over tomorrow.

OR, We were only following orders!

Could this piece have been written by Pence? He is an evangelical fanatic looking longingly at the Presidency.