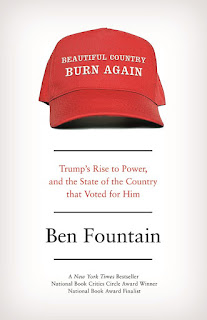 “What is it about the American character that allows the long con of our politics to go on and on, electing crooks, racists, bullies, hate-mongering preachers, corporate bagmen and bald-faced liars? Not always, but often. The history is damning. We must on some level, want what they are offering.”


That is sometime Guardian scribe and novelist Ben Fountain's take on the people and politics of 21st century America.

I find it hard to argue with his assessment that Americans must want what their caste of political charlatans are offering. What else can explain how they persistently and, worse, reliably are herded into voting against their own and collective working-class self-interest?

Twice before in its history, the United States has been faced with a crisis so severe it was forced to reinvent itself in order to survive: first, the struggle over slavery, culminating in the Civil War, and the second, the Great Depression, which led to President Roosevelt’s New Deal and the establishment of America as a social-democratic state. In a sequence of essays that excavate the past while laying bare the political upheaval of 2016, Ben Fountain argues that the United States may be facing a third existential crisis, one that will require a “burning” of the old order as America attempts to remake itself.

Beautiful Country Burn Again narrates a shocking year in American politics, moving from the early days of the Iowa Caucus to the crystalizing moments of the Democratic and Republican national conventions, and culminating in the aftershocks of the weeks following election night. Along the way, Fountain probes deeply into history, illuminating the forces and watershed moments of the past that mirror and precipitated the present, from the hollowed-out notion of the American Dream, to Richard Nixon’s southern strategy, to our weaponized new conception of American exceptionalism, to the cult of celebrity that gave rise to Donald Trump.


His eye for the absurd and ability to draw attention to the sheer strangeness of America made him a perfect observer of 2016: when politics met reality TV, where penis size briefly became a measure of suitability for high office and where a candidate for the White House was revealed weeks before polling day as a self-declared sexual predator, and still won.

Fountain’s essays for the Guardian, which I commissioned, saw him move from the snows of Iowa through Dallas for the opening day of the baseball season and on to the National Rifle Association convention in Louisville, Kentucky. In Cleveland, Ohio, his coverage of the Republican convention drew a direct line to Norman Mailer’s view of the 1968 race, Miami and the Siege of Chicago. His year ended with an examination of the benefits of big government in rural Texas, just as Trump’s anti-Washington bulldozer was accelerating.

Two years on, in the whirling chaos of the Trumpian news cycle, his election-year commentaries could have seemed faded, almost quaint mementos. But in book form, expanded, they live up to his own description: they are both a diagnosis of America’s symptoms of stress and a record of developing crisis.

...He is unsparing in scorn for the amped-up patriotism used to create the myth of American exceptionalism, the idea of a chosen land specially blessed and purposed with a world-changing mission.

“It’s the I-Love-America-More-Than-You smackdown: America is and always has been the greatest, ever, at everything, and anyone who disagrees just doesn’t love America enough. Which is political discourse as fairy tale, a made-up story for children.

America had to remake itself twice to survive as a plausible constitutional democracy – first due to the crisis of slavery, then with the Great Depression. Now, Fountain warns, America is again in danger of becoming a democracy in name only.

“One wonders how close to hell we’ll have to come in our own time before a similarly drastic act of reinvention is attempted.”

You have to wonder about the degree of self loathing among Americans, Mound. They trumpet their patriotism while at the same time wanting to burn the place down. It's a strange madness.

.. we know there is no such family actually.. sitting at the dining room table, maybe 2 or 3 kids, mom, dad, maybe even an elder aunt or a live in grandparent or two. Are they black, white or brown ? And do they attend church ? Does it matter which church or mosque or neither

But the point is.. that's who end up scratching their head, left wondering why your article is absolutely true. Their government, their political parties are absolute lying thieving dirtbags. And.. they have to contemplate this night after night. Yes, yes, some may think Donald Trump is part wonderdog and part 2nd coming of jeebuz.. but I think a majority recognize a pus sack when they see and hear one.. and thenrest of the parasites are also recognizable at a glance.

What is the alternative Mound ? That your average Americans cannot recognize what they are seeing unfold ? The implications of that would bring Darwinism into the picture. Families that leave Borax on the counter for children to play with or leave oven burners on all day. Never look both ways crossing a street or never wear seat belts ? Drink on the job or while driving the kids to school ?

Its astonishing & far beyond disheartening to observe.. and worse, its possible to already see similar symptoms and political behavior in Canada..

Trumps accellerating bulldozer made me think of the bulldozers in the Grapes of Wrath. The dispossed watched as the bulldozers flattened their foreclosed homes to create corporate farms.


Owen, there's a school of thought that holds a large segment of American society is caught in the grip of some form of mass psychosis, incapable of discerning fact from fiction, knowledge from belief. What else keeps that river of money flowing into the coffers of TV evangelists or hacks like Alex Jones? As I've said often before I think this section of the population has been very skilfully groomed.


Sal, can you imagine how oppressive it must feel to come to that realization? It's sort of akin to waking up and discovering you've been transformed into a North Korean overnight.


It is indeed dystopian, Rumley, especially for those who feel powerless to push back. Unlike the Occupy Movement I suspect we're headed for what has been predicted to become a 'century of revolution' in which dissent will be brutally discouraged.