The Priciest Example of Buyer's Remorse in Human History 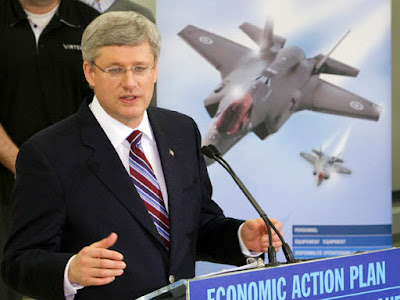 Is the hyper-expensive F-35 stealth light bomber a lemon? Have America and her allies been cajoled into buying a dud? Could just be.

When Lockheed began beating down doors to flog the F-35 it was selling the sizzle as much as the steak. Tactical invisibility. The invincible warplane. Muddled military minds were sold on the pitch that, however expensive the F-35 might be, no matter its many obvious limitations, this was the warplane they needed in their hangars.

No one paid much heed to the airplane's incredibly fragile technological edge. It was an absolute world-beater 20 years ago when it was ordered into development and production. It was designed to dominate a turn-of-the-century airspace against relatively primitive radar and aerial defences.

Unfortunately for the Pentagon and Lockheed, the F-35's intended adversaries, Russia and China, realized they had to up their game. They developed multiple-band radars and multiple-sensor fusion allowing income stealth aircraft to be located, identified, tracked and targeted at extended range. They also stole/hacked a lot of American and British contractor data - oodles of it - and began fielding their own stealth fighters. Then they began deploying a new generation of A2/AD (anti-access/area denial) missiles to target hostile forward airbases and naval units. It reached a point where no one could predict how the F-35 would fare in heavily defended hostile airspace, at least not until it sparked WWIII.

Over the summer the Pentagon's research agency, DARPA, started questioning the military's "reliance on increasingly complex, monolithic platforms" - i.e. the F-35 and its stealth big brother, the B-2 bomber.


Did the Pentagon just admit that stealth technology may not work anymore? Or that America must be ready to face a future where its airpower doesn't control the skies?

DARPA, the Pentagon's cutting-edge research agency, has quietly raised these possibilities as it searches for future technology to fight the next war. And stealth technology may not be the answer.

The agency also admits that “our acquisition system is finding it difficult to respond on relevant timescales to adversary progress, which has made the search for next-generation capabilities at once more urgent and more futile.”

If that’s the case, then the next generation of aircraft—the designs that will eventually replace the F-22, F-35 and B-2 stealth aircraft—may not be any stealthier than their predecessors. Or, in the endless race between stealth technology and the sensors that seek to penetrate its veil, stealth may have hit a brick wall.

But DARPA warns against throwing out the baby with the bath water. The F-35's stealth may be wonky and its airframe horribly compromised but its electronics are truly amazing - still. Most of that stuff can be mounted in a more capable (speed, range, turn rate, climb rate, payload etc.), less costly warplane better suited to just about everything except a "first strike/end of the world" mission.

The DARPA report suggests it may be time to revisit the all-American notion of absolute air superiority everywhere and anywhere.


DARPA is looking for other ways that U.S airpower can accomplish its objectives even without air superiority, such as “lethality through a combination of overwhelming performance (e.g. hypersonics) and overwhelming numbers (e.g. swarming low-cost weapons).”

The message for Canada is obvious. If America is showing the first signs of buyer's remorse over the F-35, this is no time for Canada to jump in head first. We have our own muddled military minds to contend with, some of them recent retirees who have jumped aboard the Lockheed bandwagon to massively pump up their already hefty pensions.
Posted by The Mound of Sound at 1:31 PM

.. ah, the wonders of 'military procurement' - Canada has such a trail of failure on that file.. going back quite a ways.. choppers, supply ships, search and rescue, used tanks, busted submarines.. oh the dilemma of trying to work in lockstep to the US of A Britain and Australia.. etc etc.. and yet the glamour of posing for photos inside the prototypes or weaponry is so irresistable ! Or slipping into a bomber jacket or desert khaki camo and stylin some sunglasses. Well, the F-35 may yet be chosen to be the greatest procurement boondoggle in Canadian history.. I do wonder at times why we call it the Ministry of Defense.. when its more and more about offensive foreign military adventurism that we can't really afford.. and meanwhile we cannot defend our own shorelines.. (sometimes referred to as 'tidewater' .. dontcha know, by political animals)

The F-35 has worked out beautifully for the war contractors who build it as well as for the all the retired generals and admirals hired to lobby for it, and the CONgresscritters who take gobs of campaign contributions from said companies to approve every aspect of it without question. All you have to do is drive around the ritzier parts of the DC area (where I live) and see all the McMansions and luxury cars and SUVs that were all purchased from taxpayer money spent on this boondoggle as well as countless others. It's legalized bribery, and I guarantee you that no one in Washington will EVER be held accountable for its failure.

Try to to attack all of this corruption and you'll be labelled as being "against the troops" and promptly run out of town by the media, who are all owned by huge conglomerates that include the war contractors (cough cough, MSNBC, cough cough). This is why Trump doesn't upset me--he's small potatoes compared to the vast, profit-taking war machine that he couldn't stop even if he wanted to. The last president to hint that he at least wanted to slow it down got a bullet to the brain pan for his troubles.


It has been a full court press marketing job, Karl, and it has been brilliant. Lockheed bears blame but so too does the US government that chose the "buy before you fly" approach.

Since man first tied a rock to a stick to make a club there hasn't been a new weapon that didn't have a limited shelf life. The US employed nukes against Japan. Russia had nukes four years later. The Brits introduced tanks in WWI. Germany had its tank a year or two later.

The F-35 was never much more than a prototype. One reason its such a marginal performer is that it's such a squat airframe to allow it to be built in three variants. Designers also had to find ways to put everything inside, no external stores. They ran out of space. There's even a fuel bladder that has to be draped over the engine. Can you say "ground fire"? There are so many compromises that would have been solved in a post-prototypical airplane.