East of Los Angeles, about a third of the way between LA and Phoenix, Arizona within the Mohave Desert lies the iconic Joshua Tree National Park. It is named for a variety of yucca that you might have guessed is the Joshua Tree. 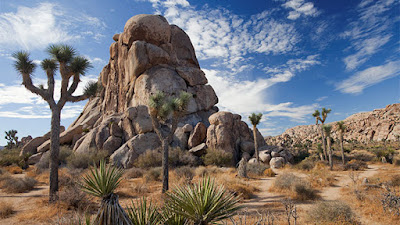 It's a beautiful, rock-strewn place that attracts hikers, climbers, mountain bikers and ordinary tourists out to soak in the scenery. The night sky is truly magnificent.

Unfortunately the park, like many American national parks, is in peril.


Most of Joshua Tree national park could become uninhabitable for its eponymous trees, glaciers will continue to melt away at Glacier national park, and many other of America’s most treasured beauty spots could be rendered virtually unrecognizable by climate change, Patrick Gonzalez, the lead author of the study, writes in the journal Environmental Research Letters.

Even the tiniest of creatures are at risk in the worst-case predictions: the American pika, a small alpine mammal, may no longer be able to survive on park land.

“We are preserving the most remarkable ecosystems, and they happen to be in extreme environments,” said Gonzalez, a climate scientist at the University of California, Berkeley. Gonzalez is also the principal climate change scientist for the US National Park Service but conducted and spoke about the research in his university capacity.

Alaska parks would see the most extreme heat increases, and the US Virgin Islands parks face 28% less rainfall by the end of the century. In Glacier Bay national park, the Muir Glacier melted 640 meters between 1948 and 2000.

In Yellowstone national park, trees are dying because bark beetles are thriving in warmer winters. Yellowstone will also become far more vulnerable to wildfires. The area burned could be up to three to 10 times higher by 2100. Joshua Tree national park in California could lose up to 90% of the habitat suitable for its namesake trees.

Gonzalez explained that parks at a higher elevation have a thinner atmosphere that warms faster. Higher temperatures are also melting snow cover and making the ground darker so that it absorbs more heat. Parks in California and the south-west US have seen both high temperatures and record-low rainfall, he said.

Now I don't want to be a scold here but what lies between America's national parks in the lower 48 and those in Alaska? I suppose that would be Canada's national and provincial parks.

If you're interested in a little McKenna bafflegab, here's Dame Cathy saying a lot of nothing from the scenic backdrop of Prince Edward Island National Park.

McKenna's video is a clever piece of propaganda, Mound. Watching it, one would certainly not get any sense of the peril rapidly overtaking us.


They don't want you sensing the urgency of the moment, Lorne. That might raise all sorts of questions for which they have no convenient answers. Charlatans.

Talking to my cousin last evening. He mentioned how warm the Atlantic Ocean is. The erosion of the sand dunes in Newfoundland and the demise of fish. Anyong

I was a little freaked out when I recently heard about a problem with alpine environments and climate change. So like, in the ocean, many of the critters respond to climate change by swimming north. It's a lot messier than that, what with sessile things and so on, but to a certain extent the whole climatic zone can just shift with the rising temperatures. And even on land, if it's plains say, things can wander north, and even plants can gradually shift, particularly small ones that live fast, die young, and disperse seeds widely. Every year the new plants survive a bit more to the north, and the zone migrates. Of course all these processes have speed limits which we are exceeding, but it's something.

But on a mountain, if things get too hot for you, where do you migrate? Uphill. It's cooler uphill. And what happens when you run out of uphill? You're toast. I was a bit shocked when I read about that in an article.

"An Unforeseen Climate Beast Awakens!"
"East Antarctica has been quiescent for centuries upon centuries… until now. It is the one piece of the climate puzzle that scientists don’t want to see turn ugly, so fast. But, it is misbehaving very, very badly and sending up smoke signals that humanity best get its act together soon and halt CO2 emissions or buy lots of scuba gear."