For OPEC, the Future Is Rosy 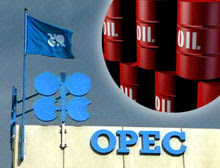 Practically gushing with petro-glee, the world oil cartel, OPEC, is predicting a "massive rise" in oil production over the next five years.


In a forecast that will dismay environmentalists – and which questions the theory that oil company reserves will become “stranded assets” – Opec’s annual report significantly revised production estimates upwards. Most of the production increase will come from countries outside Opec, led by explosive growth from frackers in the United States, with China and India leading the increase in demand.

Opec expects global oil demand to reach nearly 112m barrels per day by 2040, driven by transportation and petrochemicals. That is up from almost 100m today and higher than last year’s projection.
Coal will continue to be be burned in record amounts, despite concerns about its impact on climate change. Opec estimates that coal usage in the OECD countries will plummet by a third by 2040, but it will increase by 20% in developing countries to reach five times the volumes burned in the west.

The world’s airlines will be the single fastest growing user of oil, increasing consumption by 2.2% a year on average, to 2040. However, the largest absolute growth is expected to come from road transport.

If OPEC is right, that should be game, set and match for what remains of the fight against climate change. The carbon economy wins and that's game over.

It adds new significance to the warning of Hans Joachim Schellnhuber almost three years ago at the Paris Climate Summit that any hope of achieving the international target of holding global warming to 2 degrees Celsius hinged on the "induced implosion" of the fossil fuel industry. He knew our chances were beyond slim unless the world's nations moved to eliminate the global carbon economy.

It was in March of this year that the UN secretary general, Antoinio Guterres, warned that we had until 2020 to make sharp reductions in carbon emissions or else we would lose the fight against climate change.


“Scientists are now worried that unless accelerated action is taken by 2020, the Paris goal may become unattainable,” the UN chief told reporters at the world body’s New York Headquarters.

The Paris Agreement on climate change, adopted by world leaders in December 2015, aims to keep global temperature rise to well below 2 degrees Celsius and pursues efforts to limit the temperature increase even further, to 1.5 degrees.

“I am beginning to wonder how many more alarm bells must go off before the world rises to the challenge,” Mr. Guterres said, noting that 2017 had been filled with climate chaos and 2018 has already brought more of the same.

“Climate change is still moving much faster than we are,” he warned, calling the phenomenon the greatest threat facing humankind.

Recent information from the World Meteorological Organization (WMO), the World Bank and the International Energy Agency shows the relentless pace of climate change.

For instance, the UN chief said, energy-related carbon dioxide emissions rose 1.4 per cent, to a historic high of 32.5 gigatonnes.

The International Energy Agency echoes OPEC's petro-optimism. The 2018 World Energy Outlook won't be released until November but the 2017 WEO is consistent with OPEC projections. While it has a very positive view of renewables and the electrification of global power, it sees carbon energy booming into 2040.

In the New Policies Scenario, global energy needs rise more slowly than in the past but still expand by 30% between today and 2040, the equivalent of adding another China and India to today’s global demand. A global economy growing at an average rate of 3.4% per year, a population that expands from 7.4 billion today to more than 9 billion in 2040, and a process of urbanisation that adds a city the size of Shanghai to the world’s urban population every four months are key forces that underpin our projections. The largest contribution to demand growth – almost 30% – comes from India, whose share of global energy use rises to 11% by 2040 (still well below its 18% share in the anticipated global population). Southeast Asia, a region covered in a separate special report in the WEO-2017 series, is another rising heavyweight in global energy, with demand growing at twice the pace of China. Overall, developing countries in Asia account for two-thirds of global energy growth, with the rest coming mainly from the Middle East, Africa and Latin America.

The Guardian reports that we are now on target to exceed mankind's total 'climate budget' by 2030. This refers to the amount of greenhouse gas emissions humankind can add to the atmosphere if we're to have much hope of meeting the 2015 Paris Climate Summit agreement to hold global warming to 2 degrees Celsius. Put simply, our last, best chance is to slash emissions RFN or 'now.' Only, if the IEA and OPEC are right, we're heading in the other direction about as quickly as possible.

How do you like them odds, eh?
Posted by The Mound of Sound at 9:23 AM