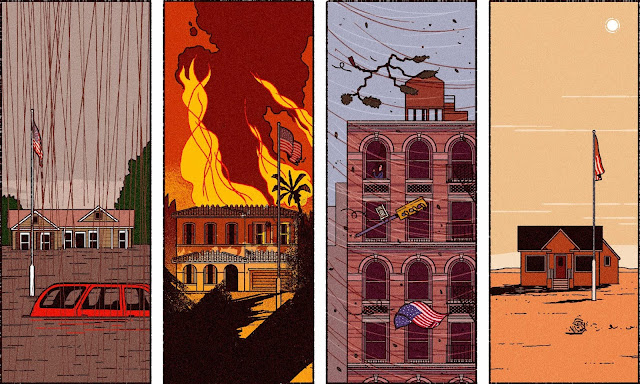 Climate migration is about to become a serious headache for the United States and its federal and state governments.

Migration is kicking off with sea level rise but that will be just one cause. Heatwaves and drought, particularly in the southwest, are expected to drive the population ever northward. While this is going on, America is expected to be dealing with an influx of climate migrants trying to leave Central America. How will a debt-ridden country struggling to cope with its own IDPs, Internally Displaced Persons, deal with migrants from other countries attempting to move in.


Millions of Americans will confront ...hard choices as climate change conjures up brutal storms, flooding rains, receding coastlines and punishing heat. Many are already opting to shift to less perilous areas of the same city, or to havens in other states. Whole towns from Alaska to Louisiana are looking to relocate, in their entirety, to safer ground.

The era of climate migration is, virtually unheralded, already upon America.

The population shift gathering pace is so sprawling that it may rival anything in US history. “Including all climate impacts it isn’t too far-fetched to imagine something twice as large as the Dustbowl,” said Jesse Keenan, a climate adaptation expert at Harvard University, referencing the 1930s upheaval in which 2.5 million people moved from the dusty, drought-ridden plains to California.

This enormous migration will probably take place over a longer period than the Dustbowl but its implications are both profound and opaque. It will plunge the US into an utterly alien reality. “It is very difficult to model human behaviour under such extreme and historically unprecedented circumstances,” Keenan admits.

...“I don’t see the slightest evidence that anyone is seriously thinking about what to do with the future climate refugee stream,” said Orrin Pilkey, professor emeritus of coastal geology at Duke University. “It boggles the mind to see crowds of climate refugees arriving in town and looking for work and food.”


A sense of fatalism is ...starting to grip some local officials. Philip Stoddard, mayor of South Miami, has seen a colleague, spooked by sea level rise, move to California and some neighbours sell their houses before an expected slump in prices. Stoddard and his wife regularly discuss buying a fallback property, perhaps in Washington DC.

“Most people will wait for the problem to be bad to take action, that’s what I worry about,” he said. “We can buy a lot of time, but in the end we lose. The sea level will go over the tops of our buildings.”

Sanitation is an immediate preoccupation for Stoddard, given the large proportion of residents who aren’t served by sewage works. “If you’re using a septic tank and your toilet starts to overflow into your bathroom because of water inundation, that’s a basis-of-civilization problem,” he said. “A medieval city wasn’t a nice smelling place and they had a lot of diseases.”

Those living near the coasts will face pressures of the gradual (sea level rise) as well as dramatic (storms) nature but people inland will also be harried to move by climate change.

Farming techniques and technology have improved immeasurably since the Dustbowl but rising temperatures are still expected to diminish yields for crops such as maize, soybeans and wheat, prompting the departure of younger people from farming. By 2050, Texas county, the largest wheat-producing county in Oklahoma, could spend an extra 40 days a year above 90F (32C) compared with now.

...“People will get very grumpy and upset with very hot temperatures,” said Amir Jina, an environmental economist at the University of Chicago who co-authored the research on economic losses. “Even if you have air conditioning, some areas start to look less habitable. By the middle of the century parts of the south-west and south-east won’t look attractive to live in.

“That insidious climate migration is the one we should worry about. The big disasters such as hurricanes will be obvious. It’s the pressures we don’t know or understand that will reshape population in the 21st century.”

The Rehabilitation of the "Rust Belt"?


Prodded to name refuges in the US, researchers will point to Washington and Oregon in the Pacific north-west, where temperatures will remain bearable and disasters unlikely to strike. Areas close to the Great Lakes and in New England are also expected to prove increasingly attractive to those looking to move.

... “As a country we aren’t set up to deal with slow-moving disasters like this, so people around the country are on their own,” said Joel Clement, a former Department of the Interior official who worked on the relocation of Alaskan towns.

...“We won’t see whole areas abandoned but neighborhoods will get sparse and wild looking, the tax base will start to crumble,” said Stoddard, mayor of South Miami. “We don’t have the laws to deal with that sort of piecemeal retreat. It’s magical thinking to think someone else will buy out your property.

“We need a plan as to what will be defended because at the moment the approach is that some kid in a garage will come with a solution. There isn’t going to be a mop and bucket big enough for this problem.”

As the American nation and each of its states will be affected, we won't be immune to it either. For our governments, Liberal and Conservative, it's "out of sight/out of mind," their standard practice of dereliction. Look, they'll unashamedly screw us over trade. How do you think they'll view us when they're getting squeezed by their homegrown internally displaced person migration?

BTW, if you think this is a futuristic problem, think again.
Posted by The Mound of Sound at 11:02 AM

file:///C:/Users/publicpc/Desktop/36487.jpg If Americans know this, we will have an influx. Anyong


They'll be moving north but that doesn't mean a large segment will seek to cross into Canada. The ties that bind them to the US will remain largely intact and it will be to Washington, not Ottawa, that they'll look for assistance in relocating and re-establishing themselves.

I'm sure we'll wind up with an ample number of newcomers but our current economic base won't support any massive influx.

During summer Oregon is a popular place for climate refugees.
Here in BC we have Californians doing the same.
Funny that most of the climate refugees I spoke to are deniers!

Ever visited south Florida? If there is any place on Earth more at odds with its natural environment, I don't know of it. Horrid place, really.


I agree, TrailBlazer. We're seeing more of those California plates on the island than we did a few years ago although they're still infrequent. The climate migrants we're seeing most often are marine creatures - fish, birds and mammals - coming out of southern waters. One thing about those creatures, they don't make their preferences up. The deniers have no argument to refute what they're doing.


Karl I've never visited Florida except at the height of their winter. Even back when I visited everyone knew it was no place to be in the summer and it has gotten worse.

If the University of Hawaii team led by climate scientist, Camilo Mora, are right, a new phenomenon they call "climate departure" will set in at certain tropical locations including parts of the Caribbean and Central America within the next five years. Once that switch is flipped every year thereafter will be hotter than the hottest year experienced previously.

If every year, without exception, turns extremely hot it has major ramifications on human habitation ranging from agriculture to disease to heat mortality.

We know that sea level rise now threatens the viability of South Pacific island states such as Vanuatu. Will this new heat paradigm trigger the same outcome on our, or at least America's, doorstep?

The rise of the sea level will be relentless. Scientists have identified several "pulses" ... rapid sea level rise of many meters overs just a few years or decades ... in geological record of the distant past.

Very likely this is what in in store for the near future, though perhaps not in the lifetime of anyone alive today. It will accelerate all the scenarios cited in the Mound's post.

Hopefully an early victim of this crisis will be the concept of private real-estate and our descendants can survive via socialist cooperation.


We will certainly need new models of organization, NPOV. 18th century economics, 19th century industrialism and 20th century geopolitics have lost their utility. They no longer work for us. They now work against us.

My theory is that everything changed in the early 70s when the human population hit 3 billion, the Earth's ecological carrying capacity. Since then we've been overpopulating, over-consuming and deploying a considerable variety of conjuring tricks, eco-sleight of hand, to keep growing on a perpetual, exponential basis. As a global civilization we have developed a mortal dependency on a wholly lethal form of organization. Civilizational meth addicts.