Fascism for the 21st Century 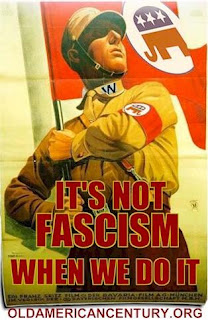 We wince a bit when someone calls a modern leader a "fascist." It can bring up comparisons with Hitler and that sort of thing. It's considered a bit underhanded even loutish.

But it's not concentration camps or killing fields that define fascism.

Yale philosopher Jason Stanley offers an updated and somewhat expansive definition of fascism. He contends that fascism isn't so much an ideology as a technique.

People are always asking, “Is such-and-such politician really a fascist?” Which is really just another way of asking if this person has a particular set of beliefs or an ideology, but again, I don’t really think of a fascist as someone who holds a set of beliefs. They’re using a certain technique to acquire and retain power.


Stanley rejects the right wing claim that fascism is at the heart of nanny-state liberalism.


If you think about fascism as a sliding scale, ordinary conservative politics is going to find itself somewhere on that scale — which is not to say that it’s fascist at all, any more than ordinary Democratic politics is communist. But just as extreme versions of communism suppress liberty on behalf of radical equality, so too do extreme versions of right-wing politics, namely fascism, suppress liberty in favor of tradition and dominance and power.

This is why fascism flourishes in moments of great anxiety, because you can connect that anxiety with fake loss. The story is typically that a once-great society has been destroyed by liberalism or feminism or cultural Marxism or whatever, and you make the dominant group feel angry and resentful about the loss of their status and power. Almost every manifestation of fascism mirrors this general narrative.


The Ultimate Weapon - the Destruction of Truth

It’s important because truth is the heart of liberal democracy. The two ideals of liberal democracy are liberty and equality. If your belief system is shot through with lies, you’re not free. Nobody thinks of the citizens of North Korea as free, because their actions are controlled by lies.


Does This Sound Familiar?

Part of what fascist politics does is get people to disassociate from reality. You get them to sign on to this fantasy version of reality, usually a nationalist narrative about the decline of the country and the need for a strong leader to return it to greatness, and from then on their anchor isn’t the world around them — it’s the leader.
... I think the current movement of leaders who use these techniques (Vladimir Putin in Russia, Recep Tayyip Erdoğan in Turkey, Viktor Orbán in Hungary, to name a few) all seek to keep the trappings of democratic institutions, but their goal is to reorient them around their own cult of personality.

Again, I wouldn’t claim — not yet, at least — that Trump is presiding over a fascist government, but he is very clearly using fascist techniques to excite his base and erode liberal democratic institutions, and that’s very troubling.

But the blame there is as much on the Republican Party as it is on Trump, because none of this would matter if they were willing to check Trump. So far, they’ve chosen loyalty to Trump over loyalty to rule of law.

We learned first from that poem who the targets are. The targets are leftists, minorities, labor unions, and anyone or any institution that isn’t glorified in the fascist narrative. And even if you’re not in any of those groups, you have to protect those who are, and you have to protect them from the very beginning. Simple acts of courage early on will save you impossible acts of courage later.

.. a fascinating & lateral look at Trump in there, Mound..
I certainly don't see Trump (theoretically the most powerful person on the planet) as a fascist. Rather I see him as a super elitist. Born into money and high society, he cultivated his crudeness and arrogance with able assistance from family and society. Obviously, he was born missing certain human chips.. and too many of the wrong chips.. so he grew up polishing his act as a scumbag able to afford lawyers and to game the law and society. Oh he dodged the draft.. and you know all the rest.. but its that 'technique' thing that catches my eye. Like any grifter, Trump will use the same patterns (technique) over and over again with zero shame. And so here we are today in North America observing an utter ass and boor entrenched among the wealthy and he has no borders. Trump would steal The Statue of Liberty if he thought he could. However, along comes Mueller & like the Lehman Brothers or Enron, Donald Trump is about to cartwheel into full infamy.

Is anyone more deserving currently.. of doing the full Monty crash and burn, squirm & wiggle, blame everyone but himself, and try to breathe his own revisionist hysterical lies ? Hell, he can throw lawyers at his plight till the cows come home.. and all he'll accomplish is to make himself look even more pitiful, more craven, more disgusting. As a measuring stick for America he's pretty unique. As an American friend of mine says, Trump is 'lower than a snake in a wagon rut' .. I see an Ugly American perhaps matched only by Alex Jones.. no wonder they're friends and associates.. two complete parasites profiting at the expense of normal hard working people's pain and agony


The professor's most important point, Sal, is that fascism isn't an ideology but a technique to gain power. Trump cleaves to no traditional ideology beyond the personal advancement of Donald J. Trump. That said, he does freely employ the fascist technique.

That's an importaant distinction, Mound -- the diference between ideology and method. Certainly there is a method to this madness.


He's certainly using the fascist technique, Owen, and for the same purpose - power.

That's a very interesting thesis and I find a lot to agree with. There's one point at which in my opinion he misses the mote in his own eye, though: "It’s important because truth is the heart of liberal democracy. The two ideals of liberal democracy are liberty and equality (my emphasis). If your belief system is shot through with lies, you’re not free."
The problem here is that "liberal democracy" as we know it is committed to capitalism, and the two ideals of capitalism are inequality and wage labour (the latter of which is not precisely the opposite of liberty, but it involves liberty's suspension during half of one's waking hours). Thus there's already a big contradiction at the heart of our society, and the "liberal democracy" belief system is "shot through with lies" before the fascists ever get involved.

Fascism seems to be capitalism's escape valve, actually--as long as nobody much is noticing that core contradiction, liberal democracy (lite) makes a great manager for capitalism. When things start to go wrong and the lower classes get antsy, capitalists start considering dumping liberal democracy in favour of fascist techniques. It's a matter of finding an alternative target for existing anger, one that doesn't involve hanging rich guys from lampposts and taking all their stuff. And then amplifying that anger, so you can use your angry people as shock troops to squash the other angry people who weren't fooled. Since the alternative anger target is never actually responsible for the problems making people mad, convincing them it does necessarily involves a bunch of fantasy.

“Once more let me remind you what fascism is.

It need not wear a brown shirt or a green shirt -- it may even wear a dress shirt.


PLG - I'm sticking with my own model. It's an egg with the rounded end at the bottom and the pointy end at the top.

As one keeps heading further, left and right alike, toward the top there's an increasing authoritarianism ending in totalitarianism at top centre - on the right, fascism, and on the left, communism.

Except left and right totalitarianism weren't the same. They were, indeed, both totalitarian. And I certainly agree that that's bad. But they did different things to their subjects. Hitler was not going to create a mandatory jobs for life scheme or guarantee housing. But fascism tended not to create a truly pervasive party apparatus breathing down everyone's necks; it would just kill or disappear a bunch of what seemed like the wrong kind of people and figure the rest would get the message. You wouldn't have a party apparatchik hanging around every military officer or factory to make sure things were done the proper Fascist way. There was no proper Fascist way; as long as people were doing the random things the regime demanded and as long as the folks at the top were getting plenty of glory and payola, it was all good. But there very definitely was a proper Communist way; they were obsessed with defining and redefining just what it was, what the perfect program would be that just as long as everyone followed the plan and echoed the line, would lead to the glorious Communist future.

And Communists were never that into defining the program by hate. Oh, sure, they hated the capitalists and they'd fall back on point-out-the-enemy tactics when things got rough, which they often did because their system didn't work that well. But it's not what they wanted to do, what they wanted to do was Communism and they were brimming with ideas about what that implied and why nobody's individual needs, ideas or desires should get in its way. With fascism this Stanley guy can make a reasonable case that rather than an ideology it's basically a bag of tricks related to inciting rage and eliminating the restraints of civilization, because there never seems to be any real content. But you just can't make that argument about Communism. Communism is almost the opposite--it's all content, all program, and no concession to the people caught in the glorious program, much less to their rage. Fascism is top-down because the point is that individual at the top, and the background point is avoiding democracy; it's top down as an end in itself. Communism is top-down because look at this beautiful utopia we want to build with this pristine ideological line, and if we let anyone say no how would we ever make any progress to it? Who are these lousy ingrates saying no to perfection anyway, the bastards? We need to crack down on them . . . and so it goes.

There are similar results in that people lose freedom and lots of people get killed, or disappeared, or tortured. But the way things are organized and how people live and what the point of the exercise is, are all different.