World history is not the ground of happiness. The periods of happiness are empty pages in her. 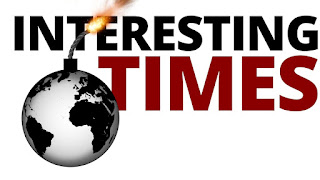 We are living in interesting times. Interesting, to be sure, and also immensely dangerous times.

Our civilization, mankind itself, seems to have slipped its moorings. Somehow we left all the helmsmen ashore before we carelessly, indifferently, drifted out to sea.

Change is upon us - economic, social, political, environmental - each a "force multiplier" of the others. No one can say with any precision where we're headed or how quickly but there is some evidence that our course leads to an extinction event.

Politically we're witnessing the decline of liberal democracy and the ascendancy of the radical right. Turkey, Hungary and Poland are obvious examples, perhaps America also (we might know after the November mid-terms). But there are less obvious and equally worrisome nations where liberal democracy is under attack including France, Germany, the Netherlands, Sweden, even the UK. Next up may be Brazil where the far right leader just survived a severe knife attack while campaigning for the presidency.

Since childhood I've wondered how the German people succumbed to virulent fascism and first empowered and then embraced a leader and a movement so vile as Hitler's Nazis. Could there be some pattern in post-WWI Germany that is mirrored in so many countries today?

I'm exploring this question through two notable books. The first is Sebastian Haffner's memoir, "Defying Hitler." Haffner was a Prussian schoolboy in WWI, the son to a mid-level bureaucrat.  His account of daily life in Germany in the 20s and 30s is engrossing and enlightening. Coming from a relatively well-off family he writes of how inflation had become so severe that his family had to spend his father's salary immediately it was received because it would be worthless in less than a week. The entire family, including the maid, was mobilized to fan out to the shops and buy whatever they could to see them through to the next payday. They got by, barely. Most were not so lucky.

The second is Milton Mayer's 1955 book, "They Thought They Were Free." Mayer was a German-American who, after the fall of the Third Reich in 1945, found the standard descriptions of the German volk unconvincing. And so he moved to Germany where he passed himself off as one of them, making friends with people who had shortly before been loyal followers of their Fuhrer.

I hope these books will furnish insight into what can possess good people to embrace monstrous leaders. Perhaps I may find parallels between the German people and those embracing the radical right today.

Another subject I want to explore is the decline of America as the world's dominant power, what is driving it and how America and the world will be impacted. I'm beginning this exercise with Kevin Phillips' 2005 book, "American Theocracy: the Peril and Politics of Radical Religion, Oil and Borrowed Money in the 21st Century."

I had to buy Phillips' book - again - because I no longer have the copy I bought when it first came out.  I often loan books to friends and then lose track of them as in this case.

There are two aspects of the book I want to re-visit. The first is Phillip's excellent analysis of the pattern by which a succession of nations - Spain, Holland, Great Britain and, most recently, the United States by turns went from economic dominance to global hegemon to decline. He observes how each state went from an agricultural economy into an industrial or trading giant before abandoning the very activity that propelled their ascendancy to become a financialized economy, ultimately using that nation's own wealth to grow its successor's economy.

The second area to explore is the process of decline and the dynamic between the ascendant state and the nation it ousts. Here Phillips focuses heavily on the "hand-off" between Great Britain and the United States. That was a successful and peaceful transition between two countries that shared both a common language, political traditions, wartime alliances and the same postwar adversary, the Soviet Union. However war between the transitional powers is more frequent by a two-to-one margin.

Bear in mind that there has been no precedent of a transition in the circumstances that we face today - climate change, overpopulation, massively unsustainable consumption of natural resources, and, of course, terrorism and the nuclear Sword of Damocles. These factors really raise the stakes for transitional parties and there have been plenty of indications that some elements on both sides are spoiling for a fight.

I'm launching into this quest mainly because I'm curious. Morbidly curious perhaps but who doesn't want some glimpse into the world that awaits us? Perhaps I'm wrong. Perhaps we would rather not know.

It's an off-topic drive-by, but the mentioning in this post of books lost through loaning relates to something that burns my ass.

I've kept a list of banned borrowers who've failed to return books I've loaned them. Both of my brothers are on it. For some reason that I don't understand a lot of guys don't treat the loaning of books with the respect they accord to other items. The worst type of borrower is one who has the impertinence to pass a book loaned to him onto someone else, feeling he has satisfied his end of the deal by informing the owner and leaving it up to him to track down the secondary borrower. I once helped a buddy in a futile attempt to track down his copy of Guy Sajer's "The Forgotten Soldier" through a chain of four or five deadbeats before we gave up. I think they must be a cult. It only had to happen to me once. That guy got an asterisk and I put out an alert on him. A similar but less strict policy applies to garden tools.

those that want to know read speculative fiction

Odd you should mention that book, John. My copy rests in a sealed, heavy plastic container in my crawlspace where, for many years, I filled several such containers with books I was sure I would read again some day. Someone will open those containers after they carry me out of here some day feet first. I'm already well beyond the point of navigating those confined quarters. There's even a large (for the day) CRT computer monitor that I decided to hang onto - just in case.


Al, I've never had much fondness for fiction, excepting the Brave New World, 1984-type genre. I prefer history and science.

Don't think of this as speculative fiction. Think of it as future history.

"Basic probability asserts that alien life must exist. Since we haven’t made contact yet, one theory goes, there must be something barring life from interstellar travel or, at least, barring it from communicating with other alien species. This barrier is known as the “Great Filter,” and it is a force or event that stops a civilization from getting to the aforementioned point of interstellar travel or communication.

If the theory holds true, there are two primary reasons that we haven’t made contact: Because societies kill themselves off before they reach a state advanced enough to explore the stars or interstellar travel is simply not possible on a technological scale. Neither option is particularly pleasing."

Based on my experience as an Earthling, I go with theory #1.

What I fail to understand is that Germany was in dyer economic circumstances due to war reparations. Inflation was high, unemployment at historic levels and everyone was disillusioned. The Germans are hardworking, industrious people, they wanted more. Hitler gave them that hope. The US economy is flying high, perhaps too high and things are relatively good. If they can fall under the trance of an evil, self aggrandizing fool like Trump, under good circumstances, how long will it take them to fall, when, not if, the economy falters? A very frightening time.


Thanks for the link, Al, but my backlog of books awaiting reading is already too hefty to take on much else.


I'm sorry, NPoV, but I have no idea how your comment relates to this post which focuses on social behaviours in authoritarian regimes and the evolving power balance between China and the United States.


You pose an important and very chilling question, Weatherguy. It is the very prospect of a fascist America, once the preserve of Sinclair Lewis fiction, becoming a reality that drove me to search out these two books on German society before and under the Nazis. It is indeed a frightening time.

When the question of Nazis and Germany comes up it is common for someone to say that it can't happen here. Of course it can. The brutality gene is quite common. All that is needed is for conditions to nurture it and it will thrive. Sinclair Lewis recognized that as did Mark Twain and Alexis de Tocqueville.

The Nuremberg Rallies were the best show in town. It is no wonder that so many people fell under Hitler's spell. Faced with such an orator all that is required is to park one's critical thinking and respond as encouraged.

On books - "The Vimy Trap" by Ian McKay & Jamie Swift is quite enlightening. Although not mentioned in the book, it helps one to understand why Chamberlain signed a peace treaty with Hitler.


Toby, I'm looking for something a little more nuanced and helpful than the truncated and often massively inaccurate stuff of our popular narrative. The first book, Defying Hitler, focuses on the two decades between the wars. The second, They Thought They Were Free, deals with life in the Third Reich from 1933-1945. Both books are rich in detail, often mundane, that I hope will help me understand how people in so many countries today are drawn into rightwing radical populism and what can flow from that.


UU, I may someday add Vimy Trap to my growing backlog of reading. Thanks for the tip.

Mound: The speculative fiction related comments sent me that way.
Too much lateral thinking? Well at least it didn't get deleted. ;-)

Lots of 'fiction' in History books among the facts and lots of info in speculative & science fiction books among the stories....
I learned about the potential arctic methane bomb from this prescient 1993 novel:
https://www.goodreads.com/book/show/1416715.Mother_of_Storms