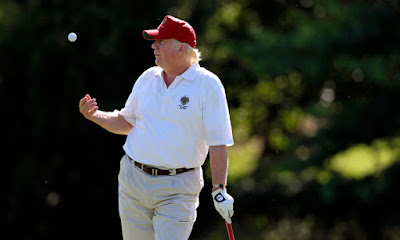 I suppose Hurricane Florence will keep Donald Trump White House-bound this weekend. No time to be seen hitting the links at Bedminster while Red State voters are heading for high ground.  Besides, Trump has other things on his mind at the moment now that his former campaign manager (and more) Paul Manafort has agreed to cooperate with the Mueller investigation.

If you want to know what Manafort means to Trump, his family and top aides like commerce secretary, Wilbur Ross, you really should watch the new documentary, "Active Measures." It's available on the American streaming service, Hulu. Apparently you can rent or buy it on iTunes. Even that, however, just scratches the surface. Team Mueller is certain to know more, probably vastly more than documentary maker, Jack Bryan.

Now imagine yourself as Donald Trump. You know some of what Manafort knows that could be problematic for you. You also know some of the other people, the Russians and Ukrainians and guys like Wilbur, whom Manafort also knows stuff about.

You've got mid-term elections looming and the prospect of facing a solid Democratic House of Representatives in the new year just itching to launch a tsunami of investigations into everything the Republicans have laboriously smothered for the past two years.

With Manafort singing like a canary, doing something as outrageous as killing the Mueller investigation would be political suicide. Mueller's popular support is rising rapidly and your numbers are tanking.

You'll also be wondering how much longer you'll be able to count on Congressional Republicans to sacrifice the party and their seats to save your backside. You already know those inside your White House are choosing, as they see it, to put country ahead of their president.

Maybe a few rounds of golf isn't such a bad idea after all.
Posted by The Mound of Sound at 10:01 AM

If "Team Mueller" knew anything that would lead to Trump's removal, there is no way they would have kept it suppressed for 18 months while Trump was allowed to sit in the Oval Office. As for that fabulous "blue wave," don't bet on it being enough to topple the Republicans. With all the media shaming going on, there will be even more people who are going to vote for the elephant who are unwilling to admit it publicly than there was in 2016.

And even if the Dems DO secure the majority, all their "investigations" will be just sound and fury, amounting to nothing--they'll be a welcome opportunity to "resist" without doing anything to actually help anybody but the wealthy. They and their media allies will end up talking themselves into thinking Trump is toast and they can nominate another "safe" neoliberal scumbag like Joe Biden, only to watch the Sanders voters largely sit out the election again. And then, lo and behold, we'll wake up on January 21, 2021 and guess who will still be president.

And this leftist, having ceased being dumb enough to think American elections are anything other than an elaborate charade, will be laughing my rear end off again at the pathetic liberals and their refusal to look in the mirror and recognize that they are their own worst enemies.


Karl, you could be right. I genuinely hope you're wrong.

Meuller got Manifort to forfeit $46 million. The investigation's paid for itself.


Yup. It's estimated Team Mueller's current tab stands at $20-million. Jennifer Rubin goes into this in a column in today's WaPo.

perhaps if mueller keeps shaking the tree, and a few more rotten apples cough up funds---america will get decent healthcare:P