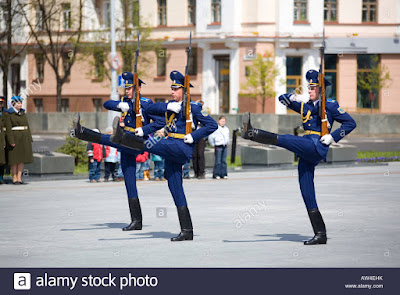 It seems that Donald Trump has been studying the Kremlin drill manual for about thirty years. Now, just in time for the mid-term elections, two exposes of Trump's lengthy ties to Russian gangsters are out.

One is a documentary, "Active Measures," that will be in theatrical release soon in Canada, perhaps, somewhere.

It's apparently available now on the American streaming service, Hulu, for those who have access to it.


The book claims to unpack an “untold story,” but it’s not entirely clear how much of it is new. One of the hardest things to accept about the Trump-Russia saga is how transparent it is. So much of the evidence is hiding in plain sight, and somehow that has made it harder to accept.

But make no mistake: Trump’s ties to shady Russian figures stretch back decades, and Unger diligently pieces them together in one place. Although Unger doesn’t provide any evidence that Trump gave the Russians anything concrete in return for their help, the case he makes for how much potential leverage the Russians had over Trump is pretty damning.

Unger maintains it's clear the Kremlin targeted and compromised Trump, largely through money laundering and bailing Trump out when he was effectively broke.


The key point I want to get across in the book is that the Russian mafia is different than the American mafia, and I think a lot of Americans don’t understand this. In Russia, the mafia is essentially a state actor. When I interviewed Gen. Oleg Kalugin, who is a former head of counterintelligence in the KGB and had been Vladimir Putin’s boss at one point, I asked him about the mafia. He said, “Oh, it’s part of the KGB. It’s part of the Russian government.”

And that’s essential to the whole premise of the book. Trump was working with the Russian mafia for more than 30 years. He was profiting from them. They rescued him. They bailed him out. They took him from being $4 billion in debt to becoming a multibillionaire again, and they fueled his political ambitions, starting more than 30 years ago. This means Trump was in bed with the Kremlin as well, whether he knew it or not.

I can’t prove what was in Trump’s head, or what he knew or when he knew it. But I document something like 1,300 transactions ...with Russian mobsters. By that, I mean real estate transactions that were all cash purchases made by anonymous shell companies that were quite obviously fronts for criminal money-laundering operations. And this represents a huge chunk of Trump’s real estate activity in the United States, so it’s quite hard to argue that he had no idea what was going on.

...Russia had hundreds of agents and assets in the US, and Gen. Kalugin, the former head of KGB operations in Russia, told me that America was a paradise for Russian spies and that they had recruited roughly 300 assets and agents in the United States, and Trump was one of them.

But it’s not just the money laundering. There was a parallel effort to seduce Trump. Sometime in 1986, Russia’s ambassador to the US, Yuri Dubinin, visited Trump in Trump Tower and told him that his building was “fabulous” and that he should build one in Moscow, and they arranged for a trip to Moscow.

According to Gen. Kalugin, that was likely the first step in the process to recruit and compromise Trump. Kalugin told me he would not be surprised in the least if the Russians have compromising materials on Trump’s activities in Moscow, something they were quite good at acquiring.

... One weird anecdote that jumped out to me was this story about Ivana Trump, whom Donald married in 1977. It turns out the Czech secret police were following her and her family, and there’s a fascinating file I quote in the book that says they started tracking her in the late 1980s, and one of the Czech secret police files says that Trump was being pressured to run for president.

But what does that mean? Who was pressuring him? How were they applying the pressure, and why? And did it have anything to do with potentially compromising materials the Russians had on Trump from his 1987 trip to Russia?

What we do know is that Trump returns from that first trip to Moscow and he takes out full-page ads in the Washington Post, New York Times, and Boston Globe — and it’s fascinating because the ads essentially pushed the same foreign policies that he’s pushing today. They were anti-European, anti-NATO — basically they were aligned with the Soviet plan to destroy the Western alliance. And Trump takes out full-page ads in major American newspapers affirming this view. Maybe that’s just what he always believed. In any case, it’s worth noting.


One of the things I hope this book shows is that there’s a new kind of war going on. It’s a global war without bombs or bullets or boots on the ground, and the weapons are information and data and social media and financial institutions. The Russian mafia is one weapon in this global conflict, and they’ve been fighting it smartly since the fall of the Soviet Union.

The Russians start businesses and front companies and commodities firms that appear legitimate but essentially work to advance the interests of the Russian state. They’re very good at getting people entangled financially and then using that as leverage to get what they want. This appears to be what they’ve done with Trump, and now he’s president of the United States.

...There’s an old saying that sometimes the worst part of the scandal is what’s legal, and the Russians, to their credit, studied our system and campaign finance laws and they exploited it masterfully. They’ve used pharmaceutical companies and energy companies and financial institutions to pour money into our politics, and we really have no idea the extent of their influence.

One thing Vladimir Putin got right was his insistence that American democracy is also corrupt, and I think he’s showing us exactly how corrupt it is. Trump is just the most glaring example, but surely there are others, most of which we know nothing about.

From Michael Wolff's "Fire and Fury," to Isikoff and Corn's "Russian Roulette: The Inside Story of Putin's War on America and the Election of Donald Trump," to Bob Woodward's "Fear, Trump in the White House" we're immersed in details about the most improbable president in American history, a man with deep ties to Russia and whose campaign and administration have been liberally salted with key officials who have their own histories with the Kremlin. Next up are Bryan's documentary, "Active Measures," and Unger's book, "House of Trump, House of Putin." If you somehow manage to wade through all that, Michael Moore's next documentary, "Fahrenheit 11/9" will be released on 21 September.

I've read "Fear and Fury" and "Russian Roulette" and I'm now halfway through "Fear." Pretty impressive stuff. I plan on watching "Active Measures" and "Fahrenheit 11/9" but I wonder if this is just going to overwhelm many Americans, numb them out. Even the inescapable signs that their president is not connected to reality may no longer be significant.

What keeps me digesting this stuff is the knowledge that what I'm reading is known to special prosecutor, Robert Mueller, and his cadre of investigators and federal and state prosecutors. I'm confident they know all of this and probably a great deal more. It's the very stuff of an investigation into Russian tampering with the 2016 election and it's almost inconceivable that this and plenty more won't be raised in Mueller's report.

He's crazy and a Russian asset, Mound -- the Siberian Candidate.

I doubt Mueller's report will ever see the light of day. Trump isn't the only politician dancing the Hopak.

Told ya, The Insane Clown POSus started as a Soviet asset back in '87 and has remained one through the collapse of the Soviet Union and the rise of Russia.

BTW, the US Intelligence Community isn't going to "allow" 300+ Russian agents and assets occupy High Offices in the US, one way or another.


I watched the two hour documentary "Active Measures" this evening. It is packed with information, most of which is not new, but which few of us have so well stitched together. It makes a powerful case that Trump Limited is a deeply criminal enterprise and has been for the past thirty years since it was co-opted as a Kremlin asset. The evidence seems incontrovertible and Mueller has more, vastly more. It was particularly interesting how Wilbur Ross and the Bank of Cyprus were a conduit for purloined Russian wealth that made its way via Deutsche Bank to Manhattan. And, of course, abruptly retiring US Supreme Court justice Anthony Kennedy's son handled that operation at Deutsche Bank. Amazing.

Get ready for the mother of all Yabbut Hillarys.