How Canada Got Screwed on NAFTA or Payback Is a Bitch 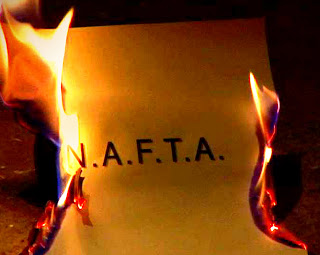 There's a feeling in Canada that the Mexicans threw us under the bus on NAFTA. Apparently the real story isn't that simple.

Yes, there was some back-stabbing that led to the US-Mexico free trade deal which left Canada on the outside looking in. Only it was Canada that first wielded the knife.


In mid-May, Canada thought it saw an opening for a quick NAFTA deal.

With a key congressional deadline looming, Canadian officials offered the Trump administration two big prizes: new auto sector rules that would move jobs out of Mexico and more access to the protected Canadian dairy market for American farmers. In exchange, they asked that the United States take most of its other demands off the table.

Mexican negotiators were blindsided. They were not ready to agree to the tougher auto rules. And they believed they had a handshake agreement with Canada going into the talks: Neither of the North American free-trade agreement’s junior partners would seek a separate peace with the United States.

Why Mexico then chose to cut its own deal with the Americans.


...Mexico, in effect, did to Canada what Canada had done to Mexico.

“Canada swung for the fences in May with a skinny NAFTA deal. I think Mexico remembered that,” said Daniel Ujczo, an Ohio-based trade lawyer representing auto and steel companies that trade under NAFTA. “Any country in Canada’s position would have tried that, but it came with risks, and one of the risks manifested itself [last] week.”

...The Canada-Mexico relationship has long been complicated. The two countries made a secret pact before NAFTA talks started in August of 2017 that neither would cut a deal with the United States behind the other’s back, Canadian and Mexican sources said.

But Canada refused to make such a commitment in public. While Prime Minister Justin Trudeau and Foreign Affairs Minister Chrystia Freeland repeatedly affirmed that they wanted a trilateral NAFTA, they would not go the extra step of promising never to make a two-way deal with the U.S.

When Mr. Trudeau visited Mexico City last fall, President Enrique Pena Nieto greeted him with a lavish banquet and invited him to address the Senate. But it was not enough to coax a public promise.

At a January round of NAFTA talks in Montreal, Canadian negotiators first proposed the idea of linking wages to automotive content. The idea was to get the United States to take one of its most protectionist demands – that all North American-made autos contain at least 50 per cent U.S. content – off the table.

The U.S. embraced the idea and came up with a specific proposal to require up to 45 per cent of a vehicle to come from factories paying US$16 an hour. The Mexicans balked: Such a requirement would strip their country, with its much lower labour costs, of its ability to compete for auto investment. They presented a counterproposal that would have applied a wage requirement to just 20 per cent of auto content, said a source with knowledge of the negotiating position.

Discussions continued through the spring. U.S. House Speaker Paul Ryan set Friday, May 17, as the deadline for a deal that could be presented to the current Congress for approval.

That was when Canada made its move, presenting a NAFTA accord that included the 40- to 45-per-cent content figure without further negotiation. As the clock ticked down, Mr. Trudeau’s chief of staff, Katie Telford, and NAFTA czar Brian Clow scrambled to Washington to make a last-ditch pitch to Mr. Trump’s advisers.

Mr. Trudeau himself hinted at the proposal in an event at the Economic Club of New York.

“To be honest, we are down to a point where there is a good deal on the table,” he said. “It’s right down to the last conversations.”


That afternoon, Mr. Guajardo fired a warning shot at the Prime Minister.

“A clarification is necessary,” he tweeted at Mr. Trudeau. “Any renegotiated #NAFTA that implies losses of existing Mexican jobs is unacceptable.”

Mario Maldonado, a prominent business journalist who has closely covered the negotiations for his column in Mexico’s El Universal newspaper, said Mexican negotiators were caught off-guard and initially upset with Canada’s play, but quickly recovered.

...And it wasn’t long before the shoe was on the other foot.

In July, Mr. Lighthizer invited the Mexican team to keep negotiating without Canada in the room. American and Mexican officials reassured their Canadian counterparts that there was nothing to worry about: The U.S. and Mexico were simply working out their differences on the auto issue – which Canada had already agreed to – and other bilateral matters that did not concern Ottawa. Once these were finished, they said, Canada would be invited back to the table. Mexican officials repeated the same assurances publicly as talks dragged on through August.

Yet, Canada had at least some inkling that discussions had gone further than mere bilateral issues. Two Canadian officials acknowledged in late August that the U.S. and Mexico had negotiated some trilateral matters, including dispute settlement and intellectual property. But they insisted any such discussions would have been preliminary in nature.

When U.S.-Mexico talks ended Aug. 27, the charade was exposed: The two countries emerged with a complete deal to overhaul nearly every aspect of NAFTA. Despite the Canada-Mexico back-channel, Canadian officials were caught off-guard. Two sources said the Canadians didn't even have all the details on what the other two countries had agreed to for days after the announcement.

Mexico joined the U.S. in warning that, if Canada did not accept the revamped pact, it would be cut out of NAFTA.

"Well, I remember, originally, Prime Minister Trudeau expressed it publicly," Fox said. "His position saying that he would always look after the interests of Canada no matter what would happen to Mexico, that he would even sacrifice having a joint position with Mexico in favor of Canada."

"Now in the very end, it resulted in the opposite," Fox said. "Mexico finally ended up coming to an agreement with the United States and Canada stayed out."

Fox, who was Mexico's president from 2000 to 2006 and has been a fierce Trump critic, urged Trudeau to be open to negotiations with Trump and possibly give in on a few issues to keep the trilateral deal intact.

"My suggestion to Prime Minister Trudeau is go ahead, stay in NAFTA. If you have to sacrifice a little bit, if you have to make some concessions, do it," Fox said. "Because NAFTA is so much more than just a few little things that can affect you."


I find this "every man for himself" dynamic troubling. Trump's approach was divide and conquer. First, one side capitulates, and then the other is punished for its impudence.

Did the Liberal government, Trudeau specifically, bungle the NAFTA negotiations by overplaying Canada's hand and intimating he would be willing to cut Mexico loose for the sake of a trade deal with Trump? It certainly sounds as though we're dealing with a made-in-Canada screw up of the most vital trade agreement Canada has.

However what is done is done and we must accept this new relationship, a strictly transactional relationship in which a former friend is now a predatory adversary, a schoolyard bully.

It seems entirely appropriate that we recalibrate the rest of our dealings according to this altered relationship that has, in fairness, been imposed on us. That could begin by withdrawing from our pointless participation in America's foreign legion.

The United States is no longer a stabilizing force globally. Trump courts our traditional adversaries while alienating America's and Canada's traditional allies. Has there ever been a better time to break from America's military and foreign policy to pursue a closer understanding with those same allies, one that is not Washington-centric.

Canada has done America's bidding, yeoman's service, from the Gulf War to Afghanistan and, most recently, the air war over Syria. While Canada has committed wealth and lives to America's overseas follies, the US has demonstrated - repeatedly - that All the King's Horses and All the King's Men no longer deliver anything approaching a meaningful victory. For this America has repaid us with hostility and bullying. It would be a hell of a world if we could not find more worthwhile alliances elsewhere.

Take all the Inside NAFTA talk with a large serving of salt.

Until a deal is done, everbody talking both off and on the record have agenda's.

Yes, of course, the Mop & Pail is a reliable source. Gave up on them years ago.

Let's wait until we get truly reliable information.

It doesn't change the metric Mound.

Mexico has an unsigned 3 page Memorandum of Understanding, not a Trade Deal, that will be torn up December 2nd, the day after the New Administration is sworn in.

The new "deadline" that will go whooshing past, is that 90 days in the US Senate rule, and even the ReThugs are polling that they are going to lose the House and Senate, so the NEW NAFTA is stillborn,

It's the Grope and Flail, the Harper fellators, so

FFS stand up and plan on walking away from some crappy deal imposed by a bully,who would never negotiate in good faith. Discussion of inside minutiae and personalities is delusional WRT this US administration

FFS, stop being a Gullibillie.

The talks are being conducted by technocrats from Industry Groups, Treasury and State.


Jay, can we drop the "Hair Shitler" stuff? Your comments are far more helpful when they're well written.

The Groat and Flail remembers this differently than I do. Canada brought the $16 figure up openly with both partners as part of its social justice plan. The North American parts percentage was also a Canadian policy openly proposed to both partners.

Since Mexico and The US have both accepted these Canadian suggestions, Mexican fury seems unlikely.

Have you followed history since 1945? When has America EVER been a "stabilizing force globally?" Go sell that nonsense to the countless countries the U.S. has bombed, invaded, droned, sanctioned or those who have had their elections interfered with and their governments undermined or overthrown, or their political leaders asassinated by the CIA.

Social revolution at a time when the Government is unresponsive to the public, starts with shaming, then shunning,......

The man does not have a name, he's only worthy of epithets.

How can 37 million people have so much sway on the Americans when they are at a mere 380 million??? Anyong