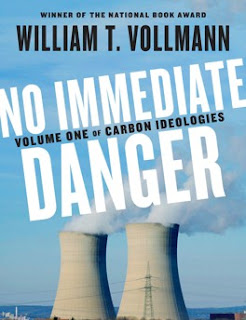 This post concerns a book(s) that neither I nor you will probably ever read. It is William T. Vollman's two-volume opus, Carbon Ideologies.

Carbon Ideologies explores the climate-changed world we are bequeathing to our very own descendants, our grandkids and great grand children and their kids. Volume One is entitled, "No Immediate Danger." The second volume is "No Good Alternative." The titles alone should let you know where Vollman is taking his work.

Vollman imagines a future reader of his 1,268 page epic:


Vollmann imagines for himself ...a murderously hostile reader who sneers at his arguments, ridicules his feeblemindedness, scorns his pathetic attempts at ingratiation. Vollmann can’t blame this reader, whom he addresses regularly throughout Carbon Ideologies, because she lives in the future, under radically different circumstances—inhabiting a “hotter, more dangerous and biologically diminished planet.” He envisions her turning the pages of his climate-change opus within the darkened recesses of an underground cave in which she has sought shelter from the unendurable heat; the plagues, droughts, and floods; the methane fireballs racing across boiling oceans. Because the soil is radioactive, she subsists on insects and recycled urine, and regards with implacable contempt her ancestors, who, as Vollmann tells her, “enjoyed the world we possessed, and deserved the world we left you.”

...Carbon Ideologies is about ...the violence inflicted by the production of coal, natural gas, oil, and nuclear energy. The victims of these carbon ideologies are not only the species of fauna and flora that are going extinct, the fragile ecosystems that will collapse, and the future generations of humans who will have to subsist on insects. The victims are us—we who are now living and who deny, to varying extents, the degree of damage we are inflicting upon ourselves. Carbon Ideologies is a chronicle of self-harm.

It is also an almanac of global energy use. The initial volume opens with a 200-page primer busy with tables, lists, and data (“I assure you that there will be no harm in skipping to page 217”) and concludes with 80 pages of definitions, units, and conversions (“Readers should feel free to skip this section”). It is a travelogue to natural landscapes riven by energy production, most prominently Fukushima (nuclear), West Virginia (coal), Colorado (natural gas), and the United Arab Emirates (oil). It is a work of oral history, containing dozens of interviews with laborers who toil in or live beside nuclear reactors, caves, and oil refineries, paired with Vollmann’s own snapshots. And it is a compassionate work of anthropology that tries to make sense of man’s inability to weigh future cataclysm against short-term comfort. Carbon Ideologies is most fascinating, however, for what it is not: a polemic.

Nearly every book about climate change that has been written for a general audience contains within it a message of hope, and often a prod toward action. Vollmann declares from the outset that he will not offer any solutions, because he does not believe any are possible: “Nothing can be done to save [the world as we know it]; therefore, nothing need be done.” This makes Carbon Ideologies, for all its merits and flaws, one of the most honest books yet written on climate change. Vollmann’s undertaking is in the vanguard of the coming second wave of climate literature, books written not to diagnose or solve the problem, but to grapple with its moral consequences.

It is also a deeply idiosyncratic project: Vollmann’s idiolect is obsessive, punctilious, twitchy, hyperobservational, and proudly amateurish. The data he presents are at times revelatory. A homeless person in America uses twice as much energy as the average global citizen; 61 percent of the energy generated in the United States in 2012 “accomplished no useful work whatsoever”; from 1980 to 2011, global energy use nearly tripled.


In Fukushima, objects in the fallout zone are not radiated but “contaminated.” In West Virginia, mountains do not have their summits chopped off but are granted “removal of overburden.” Fracking “is safer and has less environmental impact than driving a car,” a marketing director from Shale Crescent USA claims, while coal miners, according to the president of the West Virginia Coal Association, “are the greatest practicing environmentalists in the world.” Vollmann records such inanities alongside observations from figures such as Buddha (“People are ignorant and selfish”), Edmund Spenser (“Worse is the danger hidden than descried”), and Loren Eiseley (“Just as instincts may fail an animal under some shift of environmental conditions, so man’s cultural beliefs may prove inadequate to meet a new situation”). Vollmann longs to prove Buddha, Spenser, and Eiseley wrong, and submits softball questions to every industry executive he encounters; but outside of Japan, almost nobody in a position of authority agrees to comment.

Vollmann ...takes special delight in quantifying, in painstaking detail, the energy he burns in such activities as writing a draft of Carbon Ideologies, walking around the corner from his Tokyo hotel to buy a tray of convenience-store tonkatsu, and making a milkshake for his daughter. These passages are as instructive as they are tedious. They dramatize not only the tenacity of our reliance on fossil fuels, but the impossibility of truly comprehending our own culpability in our planet’s fate. How often do you pause to think about the amount of coal burned every time you take an elevator, charge your phone, or operate your blender? Even extravagant acts of self-denial are powerless in the face of such profligate consumption. Vollmann likens our most ambitious energy-conservation efforts to “a dieter who keeps eating his daily fill of cheese, pastries and ice cream … despite the laudable fact that he put broccoli on his lunch plate last Thursday.”

The global hunger for pastries grows more ravenous each year. Whatever Good Samaritan savings we can make by improving infrastructure or bicycling to work will be dwarfed by the billions who will leap onto the grid in the coming decades. About a third of the human population cooks meals over biomass—wood, charcoal, farm scraps, and animal dung. Nearly 1 billion people have no access to electricity. It will not take all of India’s adopting “the American way of life” to trigger gargantuan increases in global emissions. India’s ascending to the Namibian way of life will be enough.

The demand problem, the growth problem, the complexity problem, the cost-benefit problem, the industry problem, the political problem, the generational-delay problem, the denial problem—Vollmann scrupulously catalogs all the major unsolved problems that contribute to the colossus of climate change. “Whatever ‘solution’ I could have proposed in 2017,” he writes, “would have been found wanting before the oceans rose even one more inch!” (The title of a late chapter, “A Ray of Hope,” is to be read sarcastically.) Nor have his six years of traveling the world, tabulating data, and interviewing experts changed his mind about any major aspect of the issue. The reader who begins Carbon Ideologies hopeless will finish it hopeless. So will the hopeful reader.

But there exist other kinds of readers—those who do not read for advice or encouragement or comfort. Those who are sick of dishonesty crusading as optimism. Those who seek to understand human nature, and themselves. Because human nature is Vollmann’s true subject—as it must be. The story of climate change hangs on human behavior, not geophysics. Vollmann seeks to understand how “we could not only sustain, but accelerate the rise of atmospheric carbon levels, all the while expressing confusion, powerlessness and resentment.” Why did we take such insane risks? Could we have behaved any other way? Can we behave any other way? If not, what conclusions must we draw about our lives and our futures? Vollmann admits that even he has shied away from fully comprehending the damage we’ve done. “I had never loathed myself sufficiently to craft the punishment of full understanding,” he writes. “How could I? No one person could.” He’s right, though books like Carbon Ideologies will bring us closer.
The planet’s atmosphere will change but human nature won’t. Vollmann’s meager wish is for future readers to appreciate that they would have made the same mistakes we have. This might seem a humble ambition for a project of this scope, but only if you mistake Carbon Ideologies for a work of activism. Vollmann’s project is nothing so conventional. His “letter to the future” is a suicide note. He does not seek an intervention—only acceptance. If not forgiveness, then at least acceptance.

Don't worry. Surely a sense of urgency to kill the rest of us off more expeditiously must be taking hold somewhere in Libertopia.