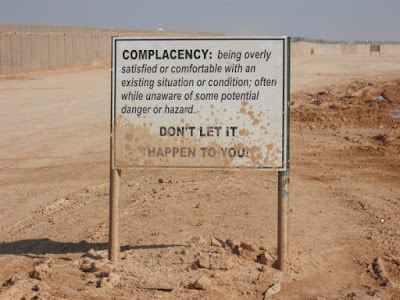 Complacency can be a mortal threat to civilized society. That message is driven home by anthropologist Jared Diamond in his book, "Collapse: How Societies Choose to Succeed or Fail."

In the book Diamond explains how societies from the Mesopotamians to the Mayans to the Easter Islanders made decisions that essentially ruined future generations. They chose failure just not in their lifetimes. Failure was bequeathed to the future. Sound familiar?

There's still a novelty element to today's severe weather events. The newsies still talk of 'once in a century' natural disasters that are now showing up once every few years.

The science types issue dire warnings about how the latest disaster is our 'new normal' only that's not true. This is an ongoing, worsening process. This is the prize for allowing the climate to warm just one degree Celsius above pre-industrial levels. There are bigger prizes to come.

The consensus seems to be that we're headed for at least three degrees Celsius of warming, possibly more, perhaps a lot more. What we're struggling to cope with today is 1C severe weather. 2C severe weather is going to be an entirely 'new normal.' 3C is an order of magnitude worse yet. And, as these increasingly severe weather events set in, the chances increase that you won't be watching them on TV in the comfort of your home, you'll be an unwilling participant. In 20 years you might be those people you're now watching as they wade through what's left of their possessions.

This is about complacency and complacency, doing nothing, is a choice. That's what the title of Jared Diamond's book means. It's how societies choose to succeed or fail. Right now you're not choosing success.

What might choosing success look like? Perhaps things like demanding your government change course. It's time to give up our petro-economy. The science types, guys like Schellnhuber, tell us that we're not going to make it if we don't. It's time to rethink our pursuit of perpetual, exponential growth, young Trudeau's sacred quest. It's time we figured out just what we can do, must do, to least screw up our grandchildren's future. It's time we agreed not to rip them off any longer to engorge our own luxury, ease and comfort.

But, being self-centered and insatiably avaricious, we'll stick with the complacency option. We'll stick with the tried and true option of voting for the least worst politician especially if he's slick enough to tell us - to our faces - that we can have a burgeoning petro-economy and fight climate change at the same time. Don't worry, be happy - that's the ticket.

The world is changing. The 'new normal' is transitory, year upon year. Resilience should be our priority but it's not. Not just yet, anyway. Later, maybe. Yeah, sure.

I just finished reading a book Called Climate of Hope, by Michael Bloomberg and Carl Pope. In it they examine an array for things that could be done and, in some jurisdictions, are being done, ranging from agricultural practices that release much less carbon from soil to mitigating the heat-island effect.

Cities are responsible for about 70% of greenhouse gas emissions, and when looked at individually, each suggested measure seems quite doable. Unfortunately, the powers-that-be have peddled the message that all remedial measures will prove costly to the economy. The authors argue the opposite, that they represent economic opportunities. Unfortunately, given the tremendous power wielded by the fossil fuel industry, that message is largely lost.


Where Bloomberg et al fall short, Lorne, is that they see global warming as a disease, not as merely a symptom of a far more intractable threat - modern human civilization.

The standard solutions, even Bloomberg-scale, fail to address overpopulation and our devastating excess consumption of resources while we continue to pursue perpetual, exponential growth.

Bloomberg has good intentions but he fails to see the larger picture, perhaps because the consequences of these other existential threats is not particularly relevant to the North American condition.

I have also read this book. I agree with you Mound. Anyong.

Gobal warming isn't a disease, Mound. But apathy is. And it's more infectious than smallpox or ebola.

Unfortunately, Owen, complacency has become our standard operating procedure. It's a sign of our decline. We just don't give a tinker's dam anymore.