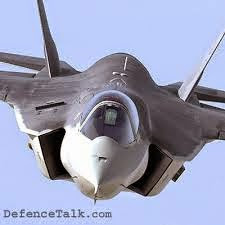 The United States and her allies are poised to commit one of the biggest and potentially most consequential military blunders of all time.  That blunder is also known as the Lockheed F-35 Joint Strike Fighter, the Lightning II.

...former armed forces minister Sir Nick Harvey said there was “not a cat in hell’s chance” the F-35 would be combat-ready by 2018. “I don’t recall ... having heard anyone suggesting that these things could be used in combat before 2020,” he said. Asked if the fighter had become a white elephant, he replied: “You could argue it was already one of the biggest white elephants in history a long time ago.”

Air Chief Marshal Sir Michael Graydon CBE, who was Chief of the Air Staff when the F-35 was first discussed in the 1990s, branded the small number ordered by Britain as “a joke” and accused MoD officials of being “in denial” over the ability of Britain to run a “serious air force”.

Britain’s ageing Tornados will be out of service in three years, leaving the UK with a maximum “offensive capability” of 60 aircraft, he said. “The Saudis [were] using up to 100 aircraft in their campaign in Yemen. We couldn’t put 100 aircraft into the air to save our lives.”

On cost, he added, the jets were now close to “unaffordable” and “it will be token numbers we will be able to afford unless there is a radical change in thinking by the Government”.

John Marshall, of the Defence Synergia think-tank, said: “This aircraft is massively expensive, technically and operationally flawed and unlikely to enter full and proper operational service for several more years.”

The F-35 epitomizes the gross mismanagement of military capability on the part of Western military and political leaders.  While they revel in talking tough and lobbing bombs into clusters of little brown people, the West generally and especially the United States gets very little bang for their defence bucks.  Factor in austerity budgeting and the dilemma is compounded enormously.  The result is a Western military alliance with gaping holes in capabilities and serious declines in readiness.

Britain, for example, no longer operates a fleet of conventional subs for defence of home waters and it has long since retired the last of its anti-submarine warfare patrol aircraft.  In the result, when Russian subs come to visit the Royal Navy submarine base in Faslane, Scotland, Britain has to get on the phone to drum up help from NATO allies.

In Canada with our three-ocean coastline, the longest in the world, our navy's readiness has fallen into such neglect that we can't even dispatch one task force to sea.  Harper has committed our armed forces to costly overseas combat missions while quietly cutting Canada's defence budget to under 1% of GDP, half the level of funding during Pierre Trudeau's days.

We have all fallen into this NATO trap of "power projection," reshaping our military forces for endless skirmishes overseas at the expense of their ability to actually defend the homeland.  The F-35 exemplifies this focus on foreign adventurism.

The only thing NATO can do that makes any sense is fold up its tent and disband. That's what it should have done when the Wall came tumbling down.

I admired NATO when I served during the height of the Cold War but it never made much sense after the collapse of the Soviet Union. That's when it got hopelessly perverted in a quest for something, anything to mask its irrelevance. That's when it transitioned from being a North Atlantic defensive alliance into something more closely resembling Rome's Legions. It's no accident that NATO has become rabidly bellicose yet nothing good can come of it.

Has the Maginot Line taught us nothing?

Not just foreign adventurism, but foreign adventurism focussed on foes with very little capability--third world imperialism, basically. Combined with graft. Lots and lots of graft--if all they wanted was to bomb impoverished brown people there are lots of amazingly cheaper options.
If they want to be intimidating Russia or China much, they're gonna have to shift gears some.