Allow Me to Introduce You to World War Three


I suppose Syria is just down the road from Armageddon. I guess that'll have to do.

Let's see, we've got so many players - Syria, of course, and then there's the Syrian rebels (of sorts), Syrian Kurds, the Islamists (al Nusra, al Qaeda, ISIS), the Western Meddlers (US, Britain, France, Canada, Australia and various others), oh yeah, Russia, Iran although they're pretty much in Iraq, and of course there's Turkey although it's not sure from one day to the next whose side they're on. That's a full load by any description.

Now we've got a new player, Saudi Arabia, and the Sauds, unlike the West, are taking their fight right to Assad. This is where things could spiral out of control really fast.

The Sauds are massing ground and air force units in Turkey and, no, they're not going after ISIS. From The Independent:

"Bashar al-Assad will leave - have no doubt about it" Saudi Arabia's Foreign Minister Adel al-Jubeir told CNN. "He will either leave by a political process or he will be removed by force."

Saudi Arabia has sent troops and fighter jets to a Turkish military base ahead of a possible ground invasion of Syria.

Mr Jubeir said Saudi Arabia is prepared to contribute ground troops to the fight in Syria, but only as part of a US-led coalition.

He added: "We will push as much as we can to ensure that the political process works. But if that doesn't work, it will be because of the obstinance of the Syrian regime and that of its allies.

"And should that prove to be the case, then it becomes clear that there is no option to remove Bashar al-Assad except by force."

The Saudi foreign minister says Russia won't be able to save Assad. That's pretty big talk from a guy whose country has had to appeal to Israel for help crushing the Houthi rebels in Yemen. Why do they need Israel's help. Because the Houthi are kicking Saudi ass. al-Jubeir let slip that the Houthis have already shot down 28 Saudi F-15s with basic, shoulder-launched anti-aircraft missiles. Wow, that's getting costly. 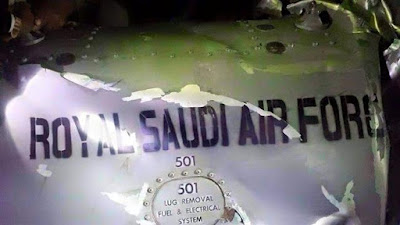 al-Jubeir may be crazy enough to believe Putin will fold and withdraw his forces if Saudi troops invade Syria to topple Assad.

awdnews is out of Pakistan and are not a reliable source.

I seriously wonder whose side Canada is on because I can't figure out who is supposed to be the good guys.

And who knows what the Taliban are up to these days....

The main story is from The Independent, Jay, and that's very credible. As to the business about Saudi jet losses, I can't imagine a Sunni Pakistani news agency being pro-Houthi, can you?

@ Anon - the Talibs are reportedly fighting ISIS forces in Afghanistan. Then again, we're buddies with the Saudis who are bombing the hell out of the Yemeni Houthis. Those rebel Houthis are also fighting a land war with ISIS and al Qaeda forces in Yemen. In other words we're allied with a country that's flying air support for ISIS. Neat, eh?

I read an article the other day Mound where the author said the US is getting 4 times the money for their military this year. They are expanding throughout Europe because of the threat they say of Russian aggression toward Europe. What their really doing is preparing to provoke, attack or invade Russia. I wonder if Russia going off the dollar and on to the Chinese Yuan has anything to do with the US's military expansion. So much propaganda being focused on Russia. I still believe the Reason US/NATO obliterated Libya and murdered Quaddafi, was because he wanted to also stop using the dollar and go onto the gold dinar for all of Africa.
The US seems to be accelerating their aggression toward Russia. I don't know why Europe is passively accepting this from the US. They know Russia is not a threat to them. This is a very dangerous move by the US. If you're interested in the article, I'd have to look it up and I'd be glad to do that.

If you're interested Mound. The article is posted on the Axis of Logic site, its title is "US now overtly at war against Russia", by Eric Zuesse.


Yes, Pamela, Obama has increased the Pentagon's budget for Europe four-fold recently. It's hard to say what's going on but I don't believe the US is mad enough to start a shooting war with Russia. NATO seems to be more bellicose than ever and I've questioned whether the positioning of destroyers and frigates in the Aegean is really about stopping refugee smuggling.

A recent American assessment suggests NATO's forward deployment in the Baltics would be eliminated within 3-days if the Russians chose to attack.

There's a real propaganda war underway. I trust you saw Ignatieff's call for a NATO 'no fly zone' over Syria in the Washington Post last week. He's one crazy son of a bitch. There's plenty of speculation in the American media that Putin would attack us. Madness.

Each one of these chest bump showdowns increases the chances of something unintentionally going completely wrong.

Well we got our Cold War back. Yippee!

28 F-15's downed? What are those Saudi Eagle Drivers doing? Flying around with "Kick Me!" signs taped to their tails???

NATO ought to expel Turkey. Then the west ought to get out of fighting in the middle east. They ought to lend some support and a give a ton of money to Jordon and some of the other countries, to support the refugees and then just let them fight it out. Oh, perhaps we could ensure the kurds don't get killed.

If the Saudi's will go to war with the Americans leading what that means to me, is the Americans do the work and collect their dead and the Saudis will watch. The Saudis are no one's friend except their own. Watch out for men wearing dresses who aren't drag queens.

While the Yemen War is stacking up to be The Saudi/GCC Vietnam, wild claims are being made on the "intertubes", and not by Far's or the Ansruallah Movement, but instead, CT websites and rumour mills.

aphic video of Ansruallah fighters casually walking into a Saudi Guard Forward Operating Base and killing the Saudi National Guard.

The absence of MSM coverage creates this void.

5:56 Do you mean Ignatieff "Is one crazy son of a bastard"? Since it is women who give life and men who begin wars. This kind of comment only insults women. My comment is meant in the best manner possible but is to remind that this kind of birth so referred, is not an immaculate conception.

Yes, I'm sure that's exactly what I meant. Thanks.