Those Who Would Bomb...


Apparently a good many Canadians, even a majority, would have the federal government continue our bombing campaign against ISIS in Iraq and Syria. Let's unpack that curious thinking.

It strikes me that, let's call them the "Bombers", must believe that either the bombing campaign is working, that it will work at some point or that it's irrelevant whether it accomplishes anything meaningful and effective.

Some of the Bombers, if pressed, would probably admit they support bombing for the sake of bombing. I've written about their type before, those who see war, not as a route to victory but as a gesture. They're the dangerous type because whether they realize it or not, they're the sort of Bomber that is okay with PermaWar. War without end. War without victory or defeat. War for the sake of war. It's an odious, reprehensible mentality that doesn't understand that military violence must always be a purposeful, last resort.

I read today how broad the ranks of PermaWar Bombers have become. Mona may be leading the charge but she's ably abetted by rightwing scribes such as Ivison and Coyne. They're the whack-a-mole brigade who do not trouble themselves with either outcome or consequence provided they're not yet bored with it. You would have found them in full support of our bombing campaign in Libya that was so instrumental in turning that place into a failed state just tailor made for the establishment of Islamist extremism. We made the down bed for ISIS to settle into northwest Africa. Brilliant. 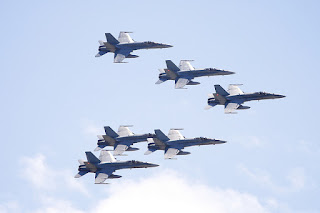 What the Bombers never quite grasp is that bombing without a workable strategy is self-defeating. All it earns you is long-lasting enmity.

As Harvard prof, Stephen Walt, recently wrote in Foreign Policy, our efforts in the Muslim world are pointless because they're in support of a demonstrably failed American foreign policy.

The playbook we’ve been using since the 1940s isn’t going to cut it anymore. We still seem to think the Middle East can be managed if we curry favor with local autocrats, back Israel to the hilt, constantly reiterate the need for U.S. “leadership,” and when all else fails, blow some stuff up. But this approach is manifestly not working, and principles that informed U.S. policy in the past are no longer helpful.

America’s track record in the region over the past 20-plus years also raises serious questions about its ability to identify realistic goals and then achieve them. Global influence rests in part on an image of competence, and the past three administrations have done little to burnish that image. Indeed, when it comes to the Middle East, the Clinton, Bush, and Obama administrations have been King Midas in reverse: Everything they touch turns not to gold but to lead or, even worse, into a violent conflagration.

...it is hard to figure out what the U.S. role should be because the policy instruments that are easiest for Washington to use are increasingly irrelevant to the problems now convulsing the region. The United States’ most readily usable instrument is its still-powerful military, whether in the form of material aid, training, airstrikes, naval task forces, drones, Special Operations Forces, or in extreme cases, the full Rapid Deployment Force. Unfortunately, the central problem facing most of the Middle East is not a powerful conventional army (i.e., the kind of enemy we’re good at defeating) but the lack of legitimate and effective institutions of local governance. As we’ve seen in Iraq and Afghanistan, the U.S. military is not designed for or good at creating local political institutions, and the more we use this tool, the more fragile, fractious, and violent local politics usually become.

Well, here’s a radical thought: If the strategic importance of a region is declining, if none of the local actors deserve unvarnished U.S. backing, if our best efforts make both friends and foes angry at us, then maybe — just maybe — the United States ought to stop trying to fix problems that it has neither the wisdom nor the will to address. In the end, the fate of the Middle East is going to be determined by the people who live there and not by us, though we might be able to play a constructive role on occasion. And the sooner Americans recognize that they’re better off coaching from the sidelines, instead of getting bloodied on the field, the better off they’ll be.

These core arguments do not occur to the Bombers. It hasn't dawned on them that near limitless bombing in Afghanistan, Iraq, Syria, Libya, Somalia and Yemen has failed at every turn. Whether it's Coyne or Ivison, Mona or Kinsella, these people don't think this through. They don't look at what winning or losing means or how we're going to achieve anything meaningful.

Where do the Bombers want to go next? Shall we bomb ISIS in Senegal or Libya or the Philippines, perhaps in Afghanistan or Indonesia?

The U.S. -- and the Bombers -- haven't learned the prime lesson of Vietnam, Mound. Carpet bombing does not bring a country to its knees.

The "Bombers" also don't question why the endless wars exist in the first place, or who is the real enemy in all of this, or what exactly is the roots of ISIS. Lets not bother with context, lets just carpet bomb!

.. perhaps the armchair warrior mindset.. is a decayed kind of evangel christo, way holier than thou or the infidels - 'view'.. I keep reminding folks to listen to Bob Dylan's 'John Brown' & kind of get to the other side of their living in Wonderland or Stunnedland looking glass..

As critics or creeps they can gaily pontificate on First Nations, tree huggers, pipelines to China & pitch in 5 bucks to fund, fuel, defend & save the Harper Rump patrol of Rawna Bwana Ambrose & her Stornaway urban cowboy husband et al from Libtard sex workers and medicinal toker hordes. They can also leap from their manicurist's chairs in outrage and don their bombardier headgear to wail at the passing of their 'old snot' colonial perceptions of entitlement .. they did absolutely NOTHING to deserve or earn. Put another way.. those 'Bombers' seem to have ZERO STANDING .. and furthermore fail to understand the term 'Standing' ! !

Exactly how many of the' Bombers' have been to Flanders .. Gallipoli? Hell, Wounded Knee? A Civil War battleground? Palestine? Its to laugh.. they deserve rude sneers only. I hope Canada's Veterans pile onto them.. humble them, trash them for their ignorance. War is Hell.. a Hell they have never known, will never know.. but they gladly, proudly trumpet all its glorious attributes - seen through their opaque vision and foolish perceptions.

Assad is using bombing by Russian allies as part of his strategy. But he's willing to follow up the bombing with attacks by ground troops, and later occupy and pacify the captured territory. The (coming) occupation and pacification are where the real costs of the Syrian war will be paid.

The West seems to think that bombing is a low cost means of achieving a military victory. It rarely is going to achieve that. And even if air power is followed up with large and costly troop ground invasion, it is rare that enough troops will be committed for a real victory.

There is no cheap way of doing war. Bombing just creates a mess.


Thanks, all of you - Owen, Pamela, Sal, Chris. Thanks, what more can I say other than how I wish there were far more Canadians of like mind.


You harken back to my undergrad days in the States, Toby. Back then there was a bloody war that claimed the lives of America's young men by the thousands and there was a draft. War was real. Young Americans died. Others came back maimed, physically and mentally. It impacted cities and small towns alike and the pain was visceral.

What is it today? It's bloodless mayhem, bloodless for us at least. What did we lose in our decade in Afghanistan, 154 dead? In my Dad's war that was one tough night for RCAF bomber command.

Do you think the Bombers would be so oblivious to the futility of what we're doing if their nephews and nieces were doing the killing and the dying, if they were attending their funerals and comforting the grieving parents? Oh no, trust me, they would be singing a different tune then.

guess who wants to bomb the Russians?

Who is Mona? Don't you mean Rona?


Chris, I just checked this post before turning in for the night. Wow. That's really a lot to take in. Iggy, back to his "muscular foreign policy".

I never quite understood the supposed brilliance which so many credited Ignatieff. Then again, when it comes to "no fly" zones, Vlad's S-400 missile batteries trump anything we've got in the region.

Set aside the "Bombers" who want to bomb the hell out of "over there", what will we Canadians bomb with?