"..To the Shores of Tripoli"


Is it time to shoot-up Libya? DefMin Harjit Sajjan hints that Canada may be looking for a new shooting war assisting Italian forces to fight ISIS militias in Libya.

Perhaps it's a matter of never leaving bad enough alone. You may recall way back in 2011 when Canada and our NATO buddies got together for an aerial frat party/bombing campaign against Gaddafi forces in Libya.  We liked it so much we banged away on that drum of eight full months (plus one day), plenty long enough to let Islamist extremists meet their pledge to use the chaos to get established in North Africa. Harper was so pleased with his handiwork, his "mission accomplished" moment that he even staged a victory flypast over Parliament Hill. Here's a picture of the trained seals celebrating the event. 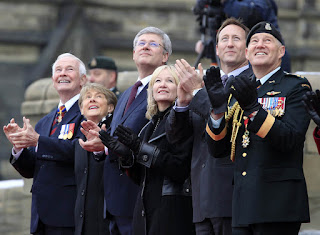 Of course the mission was never accomplished and Libya went straight into failed-state mode. It's still there today.

Joining the Italians and others to drive ISIS out of North Africa could be more productive than our hapless efforts to expel the Taliban from Afghanistan or more bombing of pickup trucks in the deserts of Iraq and Syria. There's no reason Egypt, which shares a common border with Libya couldn't and shouldn't lend plenty of help.

The only thing is we can't do much with penny packets of jets or with token garrison forces of the sort we had in Afghanistan.

This time let's not go in unless we know we have the means and the will to prevail.

Leaning on Egypt or other regional powers is a better idea. That we agree on.