It's Raining Freedom in Libya 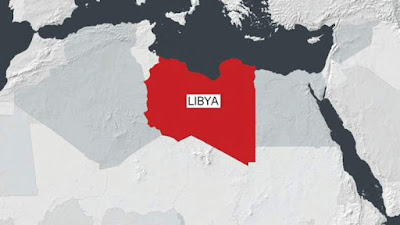 If your idea of freedom is a 500 kg. bomb, then it is indeed raining freedom in Libya. Without so much as a by your leave from the UN Security Council, American jets have opened a new chapter in "Air War ISIS" by bombing Islamist targets in Libya.

A US military spokesman said the attacks targeted a senior Tunisian militant linked to attacks in Tunisia last year. Sabratha's mayor Hussein al-Thwadi told Reuters the planes struck at 3.30am local time, hitting a building in the Qasr Talil district in which foreign workers were living. He said 41 people had been killed and six wounded. The death toll could not immediately be confirmed with other officials.

Sabratha lies about 50 miles west of Tripoli near the Tunisian border, and is one of the areas where Western officials say Islamic State (IS) militants had some presence as part of their expansion in the North African state.

Vice News reports it has received a leaked document indicating that EU ground forces may soon be dispatched to Libya.

The European Union is planning an extension of its military operation against human traffickers, known as Sophia, which could eventually include sending ground troops to war-torn Libya. According to a confidential document shared with VICE Alps and with Wikileaksby a highly-placed source in a EU member nation, who requested anonymity, the Sophia mission is ready to move into Libyan territorial waters to stop people smugglers there, but it will not do so until it is invited by Libyan authorities.

Canadian defmin, Harjit Sajjan, recently hinted that Canada is considering joining the fight to drive ISIS out of Libya, perhaps even North Africa. 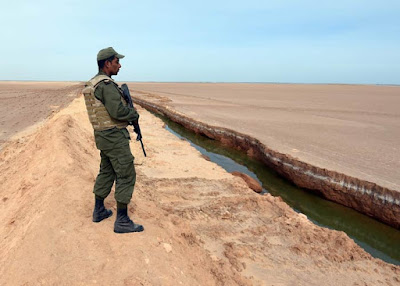 How extensive is the Islamic State presence in Libya and how much of  threat does it really pose. Those questions are addressed by Issandr el Amrani in the latest edition of Foreign Policy. You might find it helpful to have a little background on the situation in Libya and the perils and pitfalls that could befall our efforts before Canadian troops become involved.
Posted by The Mound of Sound at 8:19 AM

Mound, I've been close to where that soldier is posted. The moat must put a damper on gasoline smuggling which the Tunisian government sort of tolerated as Tunisia has no gas of its own. I've often thought that Tunisia is blessed by not having oil reserves which means that foreign powers don't want to conquer it. That's refreshing because it was previously over run by the Phoenicians, the Romans and everyone else who wanted its lovely Mediterranean climate, including food production.

These days, Tunisia is pinched by two tough neighbours.

Back to the subject, Western powers have done, and continue to do, enough damage in the Arab countries. A while back, you used the expression willful blindness. For some reason, Westerners keep thinking that they are helping and can't see that all we do is make messes. Canada, at least, ought to get out and stay out.


We don't seem to be doing them much lasting good, Toby. Too bad we stopped waiting for them to ask for help.