Exxon Mobile to Shareholders: "Stick Your Head Between Your Legs and..."

"And Kiss Your Ass Goodbye." 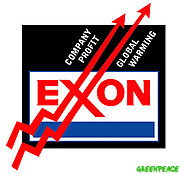 According to Grist.org, Exxon Mobile is pushing back against shareholder demands for action on climate change.

The planet’s largest publicly traded oil and gas companychallenged a resolution about climate change regulations from its own shareholders on Friday, arguing that it’s a practical improbability that the emissions-restricting goals set forth by the recent climate accord in Paris will actually be achieved. Therefore, Exxon Mobil says, it shouldn’t have to address the impact that the regulations would have on its business.

“It’s a little bit like a toddler putting their fingers in their ears and saying, ‘If I can’t hear you then what you’re saying isn’t true,'” Shanna Cleveland, manager of the Carbon Asset Risk Initiative, told InsideClimate.

The resolution, originally brought by the New York State Comptroller and four other Exxon Mobil shareholders earlier this week, had asked the U.S. Securities and Exchange Commission to force the company to address how its business would be impacted by climate mitigation efforts. Comptroller Thomas DiNapoli, whose office manages a state pension fund that has a large stake in the oil and gas giant, told Reuters that investors “need to know how Exxon Mobil’s bottom line will be impacted by the global effort to reduce greenhouse gas emissions and what the company plans to do about it.”

Reading this I couldn't help thinking about the warning given at Paris by world leading climate scientists, Hans Joachim Schellnhuber of Germany's Potsdam Institute. He said mankind's only hope of avoiding runaway global warming is the "induced implosion" of the fossil fuel industry. Coal, oil, gas - the industry has to be put down by the governments of the world. They've got several ways to do it and they'll probably have to resort to most of them. The point is, we have to understand - all of us have to understand - that these companies would see the world rendered uninhabitable for our grandchildren before they'll consider doing anything to prevent it. We're in a struggle that pits humanity against the energy giants and it's a struggle for our survival.

It's up to each individual to figure out how to reduce the use of fossils. Like moving to where I can ride a bicycle to work. Or join a farm coop so I don't need food that has been transported by truck. Switch to vegetarian. Convert my home to solar heating rather than heating with natural gas. Etc.

Anyong: I once met the owner of Exxon and agree with Owen. He is uncaring as well.

@ Owen, yes they do and, in combination, they create that lethal elixir, hubris.

@ Hugh - that'll never work. That's why Schellnhuber calls for an "induced implosion" of the energy giants. There is no other way. Yes we can change at the individual level but, of the few that do and to the limited extent they can reduce their emissions, it adds up to a lone drop in a very large bucket. Your view borders on fatalistic.