The Whole Neighbourhood is Getting Spruced Up for Our Arrival 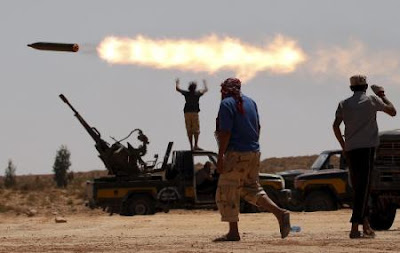 Libya's neighbours are getting prepared for a Western invasion of their failed state next door. A few days ago Canada's defmin, Harjit Sajjan, let slip that Canada has been in talks with Italy about a military operation (a.k.a. a "war") to clean house in Libya and restore order to the place. It seems they got the word in Tunisia, Egypt and Algeria.

Italy's defense minister has said the West can not afford to let spring come and go without intervening, though most officials say they are pushing for a united Libya government first to ask for help on the ground.

North African officials back international attempts to bring Libya's factions together, but they worry they will pay the price in instability, refugees and militant counter attacks if an intervention happens without a government on the ground.

Along the Libyan frontier, Tunisian authorities have built a 200-km (125 mile) barrier. Hospitals in Gafsa, Tataouine, Mednine and Gabes are prepared to receive wounded, and authorities have stockpiled supplies, officials say.

"These Tunisian fighters left here illegally and they know ways to cross back," a Tunisian security source said. "We are vigilant for when they try to escape here if the coalition attacks on Islamic State start."

Egypt has long urged the international community to help fight Islamist militancy in Libya. But Cairo has also been more circumspect about a full-blown Western military intervention.

Over the past 18 months, Egypt has ramped up border security and aerial surveillance and also carried out air strikes itself on Libyan militants. It has also relied on Bedouins whose familial links allow them to act lookouts on the border.

And the beat goes on.