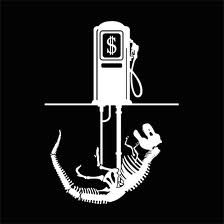 You don't often come across a vulnerability this huge. The fossil energy companies, virtually the lot of them, have a ginormous problem. Their commercial viability is dependent on maintaining a lie of colossal proportions.

To put it simply, when you look at their balance sheet, the asset column is chock full of worthless junk carried at insane values. These companies purport to have trillions of dollars of assets that are really worth maybe, maybe 20 cents on the dollar of the values claimed.

How can that be? Easy. Our planet now has a "carbon budget." That's the remaining amount of greenhouse gases we can emit if life on Earth is to have a chance, a decent chance of survival. From that we know how many more gigatonnes of fossil fuels we can burn and, from the energy companies' financial statements, we know that limit stands at about 20 per cent of their listed proven reserves.

Now, if I got you to invest in my company because you believed me when I said I had a million dollars in inventory but then you discover I really only have 20 per cent of that amount you would probably be pissed.

The New York State attorney general has launched an enquiry into whether Big Fossil has done a snake oil salesman act on the New York Stock Exchange. He wants to know if those companies have been truthful with their shareholders and investors. If they haven't, somebody could be headed for the Greybar Hotel where at least they'll be safe from the stampede of investors.

Now it's the European Union's turn.

The EU’s financial watchdog has called for governments to consider imposing asset disclosures on industry and stress tests on banks as a guard against the economic crisis that could be caused by an emergency switchover to clean energy.

The European Systemic Risk Board – set up by the EU in the wake of the 2008 crash to monitor risks to financial markets – has warned in a new report of economic “contagion” if moves to a low carbon economy happen too late and abruptly.

A scramble to take fossil fuels offline could reduce energy supplies, while increasing their cost and exposing investors to the worst effects of ‘stranded assets’, or fossil fuel holdings that may never be recouped without causing climate disaster.

Isn't it great that the State of New York and the European Union are taking steps to protect their institutions and their people from the economic devastation that stranded carbon assets would trigger? Isn't it great that Canada's not in that awful situation? Wait, what's that, we are? Bitumen, really? But aren't the federal and provincial governments doubling down on the bitumen business, racing to build pipelines to get that sludge to "tidewater"?

At some point you have to ask yourself whose side our federal and provincial politicians are on. Here's a hint - it's not yours.

At the moment, there are few willing to loan money for a pipeline . Where's the expectation of profit with an oil glut happening. Who's going to dig bitumen to lose money on every shovelfull . Where is the realistic description of the losses from oil to tidewater.

The last three decades have been marked by financial bubbles and their leftover debt, Mound -- the Tech Bubble, the Housing Bubble and the Oil Bubble. Those who claimed to be financially brilliant were simply blowing bubbles.

'Snake oil' accurately describes the way LNG export has been pushed in BC.

LNG will pay off BC's debt, make us rich, clean the atmosphere, and cure dandruff. So they said.

"We need to grow the GDP, desperately. If the GDP doesn't grow every year, we have a major problem, due to all the debt we've accumulated. We need to lower the debt to GDP ratio." This is govt's major motivation.

This is what I think might have happened: Around 1974 the federal govt was conned into borrowing money only from the private sector, banks etc. Federal debt has grown hugely since then.

Govt would like to believe this B.S. because it's politically easier to pile on debt than to actually balance the budget. Banks and lenders have an interest in growing the govt debt: they make money off it.

Now the situation is that GDP absolutely must grow, infinitely, every year. But this is unrealistic, mathematically impossible, and ultimately suicidal.

What do you think, do you agree?

Economies grow and shrink in response to conditions, resources etc. There's no rule saying they must always grow, infinitely.

I think what's happening now is that the economy is in shrinkage mode. This is due to resource limits, energy is becoming more costly, and the demographic reality of aging baby-boomers.

To expect GDP growth every year is like pushing on a string - it won't happen. But the govt must have GDP growth!