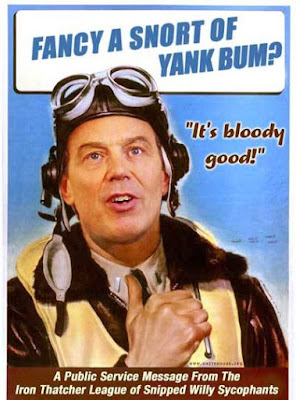 Tony Blair has advice for the next American president - be prepared to bomb jihadis wherever they pop up around the world. Seriously, George w. Bush's in-house butt sniffer, co-author of the Iraq fiasco that launched the West into PermaWar in the Middle East and South Asia, war without end, says it's time to double down.

"You're going to have a new president coming to the US, new leadership," Blair said. "How do we give those who are in office a practical policy handbook, guidebook, for how to deal with this? Because I know, if I was in office today, that's what I'd want."

"There are places in North Africa, there are places in Central Asia, places in the far East that suddenly get a surge of jihadist problems," Blair said. "There isn't a huge amount of analysis on what is the right way to put together a force capability that can move quickly to snuff out this jihadist threat wherever it might originate."

Blair sees kinetic military action as a legitimate approach to CVE, but he doesn't think the world should wait for those with radical ideologies to engage in physical violence before intervening.

One can not see the leader of the third fient to the right without thinkingaboot Dr David Kelly still dead.


There's a name I haven't thought of for a while.