Is Donald Trump Sounding the Death Knell of America's Elite? 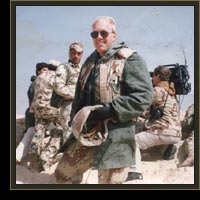 Chris Hedges looks to the Republican presidential runoff and sees the graveyard of America's atrophied oligarchs.

Power elites, blinded by hubris, intoxicated by absolute power, unable to set limits on their exploitation of the underclass, propelled to expand empire beyond its capacity to sustain itself, addicted to hedonism, spectacle and wealth, surrounded by half-witted courtiers—Alan Greenspan, Thomas Friedman, David Brooks and others—who tell them what they want to hear, and enveloped by a false sense of security because of their ability to employ massive state violence, are the last to know their privileged world is imploding.

...The carnival of the presidential election is a public display of the deep morbidity and artifice that have gripped American society. Political discourse has been reduced by design to trite patriotic and religious clichés, sentimentality, sanctimonious peons to the American character, a sacralization of militarism, and acerbic, adolescent taunts. Reality has been left behind.

Politicians are little more than brands. They sell skillfully manufactured personalities. These artificial personalities are used to humanize corporate oppression. They cannot—and do not intend to—end the futile and ceaseless wars, dismantle the security and surveillance state, halt the fossil fuel industry’s ecocide, curb the predatory class of bankers and international financers, lift Americans out of poverty or restore democracy.

...None of those elected to the White House, the Congress or statehouses have the power, and they know it, to challenge the corporate disemboweling of the country. The popular rage and frustration that have been rising against the established power elites during this election campaign will mount further as Americans, especially with a new president in the White House, realize that their voice and their vote are meaningless. The white nativists and bigots who flock to Donald Trump, along with those who sell out the most basic liberal tenants to support Hillary Clinton, are about to get taught a harsh lesson about the nature of our system of “inverted totalitarianism.” They are about to discover that we do have a class of “superpredators.” These superpredators are not poor people of color walking the streets of marginal communities. They inhabit the exclusive corporate enclaves of the privileged and the powerful.

The seeds of destruction of corporate power, however, are embedded within its own structure. The elites have no internal or external constraints. They will exploit, manipulate, lie and oppress until they create an ideological vacuum. No one but the most obtuse, including the courtiers who have severed themselves from reality, will sputter out the inanities of neoliberal ideology. And at that point the system will implode. The revolt may be right wing. It may have heavy overtones of fascism. It may cement into place a frightening police state. But that a revolt is coming is incontrovertible. The absurdity of the election proves it.

.. we need to be very clear that our previous Canadian government modeled itself on, evolved from.. very toxic extensions, tactics and situational ethics of rabid GOP dogma.. The only real difference or saving grace being that Canada is approx 6% evangelical, while the USA is approx 20% or more. But make no mistake, the evolving Harper era political animals and loyalists, were and are quite capable of fitting into the verious molds offered up currently by Trump, Cruz, Rubio and many who have been removed from the GOP nomination race. We may have dodged a bullet by trashing Harper himself.. but his remnants are working now on their next disguise.. slathering the pig with lipstick. Trudeau needs to come clean.. or clear out. If he can't be honest enough to admit his government is hamstrung or struggling to clean up government, patronage, the selling out, shake off the corporate captured status, the whipped votes, the shady trade deals, the shrinking media courage or actual journalism etc etc.. then the people will have to take to the streets and make their will clear and evident. The spying, the failed RCMP, the misaimed military, abandoned Coast Guard, fisheries under assault, Big Energy.. it all has to get cleaned up..


You're right, Sal, and I have to learn some measure of patience that's eluded me at times. There may be matters on which the government's hands are tied but they have to explain that to us, justify themselves, and it's our right to judge that for ourselves. To dismiss these war wagons as "jeeps"is not confidence building.

I am pleased and grateful for many of the things JT's Libs have done - CBC funding, taking the gags off our scientists, the First Native women's enquiry and more but I want to see him show as much sand on the big issues. The government's capitulation on the Tories' BDS motion is appalling. The still secretive Saudi arms deal is appalling. When it comes to weighing good versus bad, too often the good seem mainly gestural, low hanging fruit, while the bad seem particularly substantive, issues that go to the integrity of the party that governs us. That's where I have trouble.