What If Assad Wins, What Then? 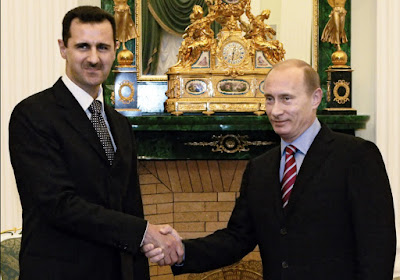 Russia's intervention in Syria may have turned the tables in favour of strongman, Bashar Assad. Russian airpower has been pounding the daylights out of Assad's opposition, the rebels (our guys), the Kurds (also our guys) and the Islamists (al Nusra/ISIS - not our guys).

With a healthy assist from the Russian air force, the Syrian military and its allies cut a key rebel supply line to Turkey on Wednesday, dealing a serious blow to the rebels in the country's north and getting closer to creating a chokehold that could turn the course of the war.

Regime forces and militias in two Shi'ite towns seized the midpoint of a strip of rebel territory running north of Aleppo, Syria's largest city and economic hub, to the Turkish border. Regime forces had launched a new offensive north of the city on Monday, according to pro-government and opposition sources. By Wednesday, they had come within a few kilometers of the two partially besieged towns of Nubl and al-Zahraa and their forces were able to converge on the rebels in the middle.

The vital rebel supply line from Aleppo City up to the Bab al-Salameh border crossing with Turkey has now been cut by the regime. Rebels and civilians told VICE News that intense bombing and shelling had taken a heavy toll on the local population; many fled north but were stranded at the still-closed border crossing, or had camped in surrounding farmlands.

The West, of course, isn't at war with the Syrian regime (Assad) although we are providing backing to the rebels in a half-assed way even as the rebels get the other half of their asses bombed to pieces by Russian warplanes. The fact that Russia is backing Assad and has those S-400 surface to air missile batteries in place pretty much guarantees that we, the West, won't be getting any deeper into this conflict - i.e. we're not going to take on the Russians for the sake of Syria. Besides, if we did get frisky with Russia, our forces in the Baltics would be overrun in about 3-days.

In Canada there are some, usually found in the shallow end of the gene pool, who insist Canada must be ass deep in the "fight against ISIS", whatever that is. These "whack-a-mole" warriors never have any viable solutions for defeating ISIS nor, to them, does that even seem relevant. Intellectually these characters are one ratchet away from embracing PermaWar.

ISIS isn't Syrian nor is it Iraqi. ISIS is in Libya, the sub-Saharan Sahel (Senegal), Tunisia, perhaps now Egypt. It is in south Asia (Afghanistan), possibly Pakistan too. It is in the Philippines and it is in Indonesia. Both Russia and China contend that ISIS has spread into their southern territories. All the King's Horses and All the King's Men don't seem to be causing ISIS too much grief.

ISIS represents a radical, fundamentalist strain of Islam which is not all that distinct from the radical form of Islam promoted by our entirely respectable Middle East ally, Saudi Arabia.

Here's a question: when was the last time a 500-pound high-explosive bomb or endless numbers of them defeated a radical, well-dispersed, decentralized and expansive ideology?

As for me, I'm with Harvard prof Stephen Walt. It's time to admit that the Emperor has no clothes. America has no viable Middle East policy. For us, it's like climbing into the backseat knowing the driver has a blood alcohol level of 2.8. Stupid, just stupid and not at all likely to end well.

We need to sit this war out and maybe the next two or three that are bound to sweep through the Muslim world. Remember, Rule #1 - don't fight wars you have no means or will to win.
Posted by The Mound of Sound at 10:48 AM

Absolutely agree with you. I'm terrified for my son in the Navy, and for all of those sons and daughters who serve with him.

Where on earth are you getting the idea that Russia is going after the Kurds? Turkey certainly is after the Kurds and they're part of NATO, which illustrates the entire stupidity of the situation, and wht Canada should leave - NOW.

Perhaps some slightly more up to date Google Searches are required. Enter "is russia bombing the kurds" and find out that Russia is supplying the Kurds, who are about the only group single-mindedly going after ISIS.

You need to read some Greaeme Decarie, another Progressive blogger.

There are few left of the Free Syrian Army; there never were many anyway. The Kurds want a greater Kurdistan; I doubt we are very supportive. They are just cannon fodder for all sides. Canada by supporting American policy is a defacto ally of Isis.

In the picture, is that some hair under the nose? He-he!