Australian artist, Missy Higgins, was nursing her newborn son when she saw the photograph of Aylan Kurdi's lifeless body being carried off a beach by a Turkish soldier. We all saw it and it was an image that left scars. 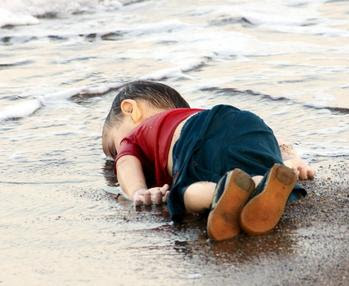 “It took a while to sort through all the emotions it brought up – including anger – and realise that I wanted to write about it,” Higgins tells Guardian Australia. “I tried not to take the moral high ground or point the finger at anyone, but rather tell the story as it happened. That [story] in itself, I think, is powerful and devastating enough.”

Produced by stark raving productions, the film clip – which features drawings by children affected by the crisis in the Middle East, accompanied by picture-book-like animation narrating the story of the Kurdi family – was created by animation director Nicholas Kallincos and award-winning director Natasha Pincus. Pincus was also responsible for the clip for Gotye and Kimbra’s 2011 collaborationSomebody That I Used To Know, which has clocked up 740m views on Youtube since being released.

She spent weeks planning the clip, and at one point was working on three different ideas for it. “But when I discovered drawings online that had been made by refugee children as part of rehabilitation programs around the world, I knew I had stumbled on the concept I needed to focus on.”

Access to the drawings was facilitated by Caritas and World Vision, who help children affected by the Middle East crisis through rehabilitation programs that, among other things, encourage them to draw. “Within a few weeks my inbox was full of hundreds of children’s drawings depicting the horrors of their experiences ... Their images haunt me still,” Pincus says.

These pictures are incorporated into an animation that has a handmade, child-like naivety to it: “It was important to me that it have texture, human touch, that still frames of it could almost be illustrations from a children’s story book. It should feel simple, beautiful and dark – like the imagination of a child.”

“There is something about the innocence and similarity of young children’s drawings from all across the world. They all draw houses and people in the same rudimentary way.

“Except these drawings were different: there were guns in the hands of the people, fighter planes in the air and blood flooding the streets. It was just devastating to see. And Nicholas Kallincos did the most incredible job at merging these drawings in with his child-like animations. All the characters have fingerprints for faces, which I think is beautiful. There is a nightmarish, fairytale feeling to it. I cry every single time I watch it.”

After a decade of the CPC bigots, it's nice to know that there are still some decent people in the world.

There are some, Rumley, but we're not awash in them.