If Your Business is Wholesale Death, Business Has Never Been Better. 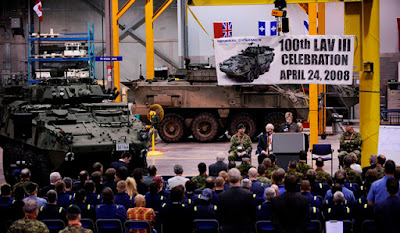 IRIN, the news service of the UN Office of Humanitarian Affairs, reports that arms sales are "astronomical." Some very sketchy folks are shelling out tens of billions of dollars to get the latest killing technology - by the boatload. Among the usual suspects is one near and dear to the heart of Canada's federal government, the House of Saud.

The UN Arms Trade Treaty monitor has a dandy review of how industrial nations are pouring weaponry into Saudi Arabia in apparent contravention of their treaty obligations. In particular they're being faulted for looking the other way as Saudi Arabia uses their high-tech death machines against civilians and civilian infrastructure in Yemen. Oopsie, who was to know?

Canada's significant contribution is noted but Canada, unlike the European Union states and even the USA, has not signed the treaty. Harper, it seems, didn't find the terms to his liking. Junior has pledged to bring Canada aboard the arms trade control deal but - apparently - just not yet, not while we're delivering $15 billion worth of war wagons to the Saudis. The optics would be terrible.

Canada's back? We sure are, honey. Now, you got money, what would you like?
Posted by The Mound of Sound at 8:07 AM

Do the Saudis have nukes? If not, are they likely to get nukes under the table?

The Saudis are not known to have nukes but they have openly tossed around the idea. There is some concern that Pakistan could have some quiet deal to provide the Sauds with the "Islamic Bomb" if the conditions required it. I assume that would include the possible use of such a weapon against a country that would not trigger American retaliation.

It's this sort of thing that seems to be driving the Shiite countries to the umbrella of Russia and the Shanghai Cooperation Organization. Never a helpful development.

Canada's GDP has to grow, every year, for infinity. Every thing else is secondary, apparently.

They are desperate to keep the debt/GDP ratio from growing. BC government is the same. It's pathetic.