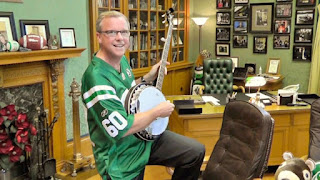 So, Saskatchewan's misfortune premier, Brad Wall, is digging in his heels and saying he won't sign on to any carbon pricing scheme because the fossil fuel industry is in a slump and therefore the time isn't right.

For Brad the time isn't right. I guess that has something to do with the bitumen ring around his lips. That's his current excuse. He's got others, trust me, his kind always do.

What Poindexter doesn't get is that time is very important, not so much to his already doomed bitumen hopes, but to take our very best shot at cutting our greenhouse gas emissions. We're already running a day late and a dollar short but that's still too much for Wall.

The best we can hope for is a pretty compromised effort from Justin. When the going gets tough on doing the right thing he folds pretty quickly. The last thing Canadians need is Wall to sabotage even that.
Posted by The Mound of Sound at 8:52 AM

The Banjo Bowl is the annual rematch game between the Winnipeg Blue Bombers and Saskatchewan Roughriders of the Canadian Football League
The "Banjo Bowl" moniker was coined by Blue Bombers board member David Asper in early 2004, inspired by an infamous comment made by Bombers placekicker Troy Westwood in the week prior to a 2003 Western Division Semi-final game between the two teams. Westwood was quoted in the media as saying that people from Regina were "a bunch of banjo-pickin' inbreds."[1] He later apologized half-heartedly for those comments, saying that "the vast majority of the people in Saskatchewan have no idea how to play the banjo."[2]


Lungta, that's precious. Now, what name would you choose for "people from Saskatchewan"?