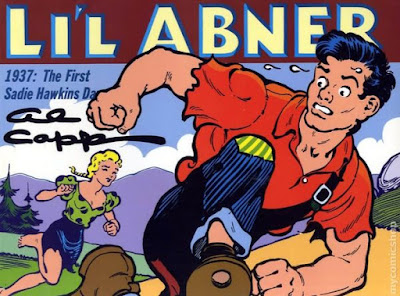 Word for the day - desuetude. As in "Sadie Hawkins Day has blessedly fallen into desuetude."

Sadie Hawkins Day was the brainchild of Al Capp, creator of Li'l Abner. On Leap Day, every four years, the women folk were allowed to hunt for a husband from the ranks of the area's eligible bachelors.  All the woman had to do was catch her man and drag him across some finish line before sundown and then he was obliged to marry her.

When I was a kid and a keen follower of Li'l Abner cartoons I actually thought Sadie Hawkins was a thing, that is until no females showed up to claim me and I imagined myself a bit of a catch.

For the record, it seems that Al Capp wasn't the first to link Leap Day and matrimony. And, according to the Beebs, the Leap Day proposal tradition is still alive and well in the UK.
Posted by The Mound of Sound at 6:29 AM