This Should Be Interesting - Netanyahu to Delineate Israel's Border. 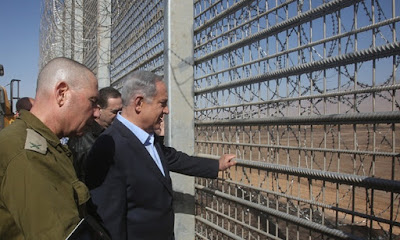 Israeli prime minister, Bibi Netanyahu, has announced a plan to encircle the state of Israel with a security fence saying, "In our neighbourhood, we need to protect ourselves from wild beasts."

I'm not sure whether Bibi has really thought this one through. Fortifications don't just keep people out, they keep people in.

The bigger problem is this security fence effectively claims whatever territory it incorporates as part of Israel which, I suspect, will mean most of the Palestinian or occupied territory also known as the West Bank.
Posted by The Mound of Sound at 10:20 AM

With the population expanding past the 7,000,000,000 mark we are going to see more gated communities with more fortification sort of like medieval walled city states.


It's already well underway in the United States where entire 'gated' municipalities are being created complete with all city services from utilities to fire and police departments. They use their taxes to keep out undesirables, welfare types and such.