Is the Petro-Economy a Millstone Around Canada's Neck? 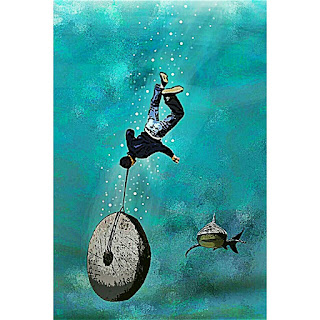 Didn't we imagine that this was going to be our ticket to Easy Street? Hell we had almost as much oil as Saudi Arabia and the world was going to be beating a path to our doors, begging us to take their wealth and treasure. Even Ignatieff proclaimed Athabasca bitumen the "beating heart of the Canadian economy for the 21st century."

Now it turns out that our bet on bitumen may go from being Canada's petro-blessing to the ruin of our national economy.  Andrew Nikiforuk looks at the perils we face from our bitumen bounty in the latest Tyee.

"...the descent of oil has become a sort of Sherman's March on globalization.

"The status-quo pundits say don't worry. The world is awash in oil due to the brute force of fracking and Alberta's faltering bitumen boom.

"Markets are just experiencing another wacky correction in supply and demand, and business as usual will continue. Relax, add the pundits -- lower energy prices tend to revive economies by putting more money in the hands of consumers, and all will be well.

"But the global economy is now confounding academic theorists. Falling gasoline prices haven't propped up the economy, or stimulated growth for that matter. In fact, global finance appears to be driving into another recession while debt grows, innovation disappears, capital investment recedes and wages stagnate.

"So there must be another story."

There is, and it's a rather grim energy fairy tale. This one shows how the world's economy depends on the quality of energy burned, and not the amount of money spent. When economies spend cheap oil, GDP rises; when they switch to costly and unconventional stuff, growth comes to a screeching halt.

In this unfolding story, cheap credit played a big role. It allowed an industry to carelessly borrow trillions to chase ultra-expensive and risky resources such as bitumen and shale oil.

An energy industry laden with toxic debt is now earning less money than what it costs to shovel bitumen or frack shale. And this kind of debt is not going to end well for financial markets. Or for ordinary people.

But the darkest character in this fairy tale is the monster called diminishing returns.

On a diet of cheap oil, the world financial system grew on energy surpluses like a wildfire dines on trees in a forest.

But no more. The cheap stuff is gone, and companies are now frantically fracking North Dakota at a cost of $60 a barrel or mining northern Alberta's heavy bitumen at costs as high as $80 a barrel. With oil at $30 a barrel, many companies are, as respected Houston analyst Art Berman recently put it, "losing their asses."

...The implications of diminishing returns for oil are stark: the more society invests in unconventional hydrocarbons, warns [David Murphy of St. Lawrence University], the more "growth will become harder to achieve and come at an increasingly higher financial, energetic and environmental cost."

As society switches to energy resources of lower and lower quality, simply maintaining the flow of net energy to society will require that companies and nations accrue more debt to spend a proportionally larger amount of capital on gross energy extraction that comes with dirtier environmental impacts, such as carbon-spewing bitumen.

Diminishing returns from oil production "indicate that we should expect the economic growth rates of the next 100 years to look nothing like those of the last 100 years," writes Murphy.

That reality now seems to be unfolding on a global scale. The trouble really became apparent when oil prices leapt beyond $90 a barrel in 2010 and remained at unprecedented highs for four years. These high prices, in turn, put recessionary pressures on the global economy. Costly oil forced people, nations and firms to scale back and put on the brakes.

Meanwhile, Big Oil continued to borrow billions to extract difficult and unconventional hydrocarbons such as deep-sea oil, bitumen and shale oil. All required more capital and more energy to pull out of the ground.

In 2000, companies spent $400 billion a year chasing hydrocarbons. But by 2013 they were spending nearly $900 billion with little change in production.

...In 2014, federal energy bean counters in the U.S. revealed that the energy industry was actually spending more than it was earning. The U.S. Energy Administration reported 127 of the largest oil and gas firms generated $568 billion in cash from their operations during 2013-2014, while their expenses totaled $677 billion. To cover the difference of $110 billion, the energy giants increased their debt load or sold off assets.

Given that the gap between earned cash and spending stood at a modest $10 billion in 2010, that's a significant change for the industry as well as the global economy it fuels. Since then, the toxic debt load has grown larger.

Wood Mackenzie, an oil consultancy, now estimates that 2.2 million barrels a day of Canadian production is unprofitable with oil at US$35 a barrel, and most of that debt-inviting extraction is coming from the high cost and complex oilsands.

...Gail Tverberg, an accountant and energy blogger, has an interestingtheory about all this.

She believes that "all economies have finite lifetimes, just as humans, animals, plants and hurricanes do." She thinks that we may be "in the unfortunate position of observing the end of our economy's lifetime."

Economists used to believe that when societies peaked, prices would rise, and energy products would become scarce. But Tverberg reckons the networked economy won't necessarily behave that way. "High energy prices tend to lead to recession, bringing down prices. Low wages and slow growth in debt also tend to bring down prices. A networked economy can work in ways that does not match our intuition; this is why many researchers fail to understand the nature of the problem we are facing."

She adds that high oil prices expertly disguised the brutal reality of diminishing returns. Whenever an industry or society blows up the principles of efficiency by getting on a treadmill with no efficiency or gain in energy returns, there is no growth. But there is stagnation and political unrest.

Tverberg worries about toxic debt loads, too. As energy gets more expensive (and renewables are expensive and fossil fuel dependent, too), society has to borrow more money to keep a global clunker on the road. Tverberg notes that you can only dial up the debt for so long before you "discover that debt growth has a lot of adverse effects. And one of the big ones is that it tends to funnel money to the wealthier class and take money away from the poor members of society."

A peak world and complex society faces a conundrum: high oil prices shrink the economy while low oil prices destabilize it due to diminishing energy returns.

There may be some temporary solutions, but they involve ending cheap credit, shutting in at least a million barrels of oil, and regulating the price of oil as the Railroad Commission did in the 1930s. But our politicians cling to the myth of constant growth and have no idea what the real problem is.

...Diminishing returns, just like rising expectations, do not bring out the best in people: expect violent reactions and revolutions in petro-states and indebted nations. Expect the unexpected and a narrative of volatility.

"Unfortunately, what we are facing now is a predicament, rather than a problem," reflects Tverberg. "There is quite likely no good solution. This is a worry."

I won't blame Harper, Trudeau or Rachel of the current price of WTI, Brent or any of the other multitude of benchmarks that are flipped around at will to make some point or another.

What I will point out is that our master economist thought it was truly awesome to concentrate all our manufacturing and wealth creation in the production (and supply of infrastructure for the same) of petroleum products.

Reality is starting to dawn on those who understand what it means to strand assets due to "Climate Change" and having hitched all our horses to one wagon, finding out that the wagon will not be carrying on is rather unpleasant.

Master economist? Last time I saw such brilliance was just prior to the Tech rech when another blow hard recommended Nortel and other highly speculative overpriced high risk investments as a sure thing.

Don't put all your eggs in one basket lest you fall down.