With Alberta Reeling, No One in Power Wants to Hear This 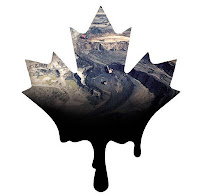 We know that the survival of life on Earth depends on mankind's ability to wean ourselves off fossil fuels. We know that there's an urgent need for dramatic cutbacks. There's a 'collective wisdom' thing associated with this crisis.

We've been working from a 'carbon budget.' This is a calculation of how much greenhouse gas is already in the atmosphere and how much additional greenhouse gas we can emit if we're to stay within the supposed 2 degree Celsius warming target.

Right now there's nothing we can do about existing emissions and so the focus is on curbing new emissions. And that's where we've hit a major snag.

Joeri Rogelj, research scholar at the International Institute for Applied Systems Analysis in Austria, and European and Canadian colleagues propose in Nature Climate Change that all previous estimates of the quantities of carbon dioxide that can be released into the atmosphere before the thermometer rises to potentially catastrophic levels are too generous.

Instead of a range of permissible emissions estimates that ranged up to 2,390 bn tons from 2015 onwards, the very most humans could release would be 1,240 bn tons.

So, we had our new emissions pegged at 2,400 billion tons of greenhouse gas but the new research shows we have to cut that allowance by half, down to just over 1,200 billion tons.

In effect, that halves the levels of diesel and petrol available for petrol tanks, coal for power stations, and natural gas for central heating and cooking available to humankind before the global average temperature – already 1C higher than it was at the start of the Industrial Revolution – reaches the notional 2C mark long agreed internationally as being the point of no return for the planet.

Here's the thing. These latest numbers are still based on that outdated 2C target for limiting warming. That's a political number that has lost its scientific validity. We now know that to avoid triggering natural feedback loops, runaway global warming, 1.5C is the limit and even that only gives us a reasonable chance.

Here in Ontario, in preparation for bringing in a cap and trade system, Kathleen Wynne has announced a get-out-of-jail free card for big industrial polluters during a 'transitional period':

Hardly an auspicious beginning at such a critical juncture.

Cap and trade is a waste of time, it's a scam and it doesn't work.

How about mandating a 5% per year ramping down of all GHG emissions sources, world-wide?

I read that Ontario is hoping that lowered gas and oil prices will buffer consumers from "sticker shock" of new carbon levies. They're missing the point. Carbon taxes are intended to discourage consumption. That means they must be felt by consumers. It's the awareness of them that shifts behaviour. Let's hope the "transitional period" is shorter than the time we have remaining to wean ourselves off fossil fuels.

Hugh, who will mandate your suggested terms to the United States Congress? The xenophobes would go ballistic at any such attempt.

I dont understand why the tar sands could not be used exclusivly to make ashphalt.

Good point, Steve. I don't know whether the economics of asphalt would make bitumen from a somewhat remote place viable? Elizabeth May has speculated bitumen might be suitable for processing into plastics.