Iggy Doesn't Just Want an Air War Over Syria. He Wants a Shooting War with the Russians. 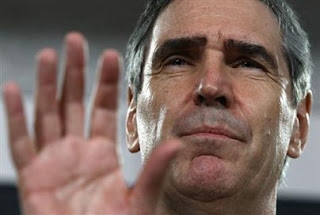 Thank God and Greyhound he's gone. It's in the Washington Post. The Count, Iggy, former Liberal clown prince, wants NATO to declare part of Syria a "no fly" zone. Ignatieff seems to be spoiling for a showdown with Putin's and Assad's forces in Syria.

It seems the twerp doesn't realize that Syrian airspace is already controlled by Russian S-400 missile batteries. Put simply, we won't be imposing a no fly zone without risking a major conflagration with Russia and if that starts in Syria it won't end there.

Just for background, an analysis of NATO's forces in the Baltics has concluded the Russians could roll us up there in 3-days.

It seems to have become something of a Western intellectual pastime to underestimate the Russians, as though they have no significant military might to match their expansionist interests. Iggy personifies that old Woody Allen joke - he proves you can be absolutely brilliant and have no idea what's going on.

Knob major Knob, I hope the Liberaly party is totally purged of his toadies


I'm with Steve, Kirby. The guy's a major knob.

Yes, we do underestimate the Russians. It's now pretty obvious that Putin knew what he was doing when, despite the collapse in energy prices, he went ahead with a major rearmament programme. I think he saw Cold War returning out of the chaos the West was creating and the destabilization of so many countries due to climate change, food shortages and such.

Why don't we as Canadians sit down with the Russians and have a good old chin wag. It couldn't make things worse now, could it?