"Idiocracy" It Began as Satire, Now It's a Documentary 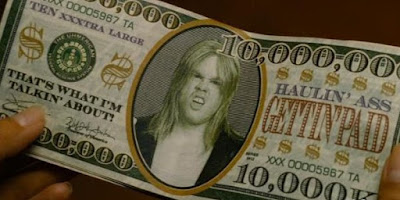 Idiocracy has been a long-cherished sci-fi satire in cult circles, telling the tale of two people who wake up from a cryogenic sleep to find that the country has become a wasteland of anti-intellectualism.

Now, ten years later, the co-writer of the cult comedy classic, Etan Cohen, thinks that the movie is satire no longer, marveling that his movie has gone from fiction to non-fiction. On Twitter today, Cohen used his movie to perfectly sum up our current political climate.

Speaking with The Hill, he quipped that “I thought the worst thing that would come was everyone wearing Crocs.” Cohen’s jokes come from a place of disenchanted exhaustion. Many voters are sharing in this exhaustion during an election season where a reality show host who gloated recently “I love the poorly educated!” is a frontrunner for President of the United States of America.

“People will email and post stuff on my Twitter that’s like, ‘Hey, you predicted it right!’ So that’s always nice. But it’s not always nice because you want the world to become a better place,” Mike Judge, the other co-writer and director of the film, told The Verge in 2014. “Yep, we’re doomed. Might as well make jokes about it.” 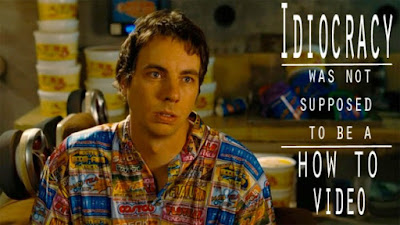 Here's an interesting review of Idiocracy and it's reawakened relevance from The Daily Beast.

If you don’t know Idiocracy, well, there’s a good reason for that. Judge’s dystopian satire was nearly snuffed in the cradle by its own studio, 20th Century Fox. It was never screened for critics; its release was postponed; and it received virtually zero publicity. “Why did Fox,” wondered Dan Mitchell of The New York Times, “after sitting on the movie for two years before releasing it Sept. 1, decide not to market the film, opting instead to open it quietly in only 130 theaters and then quickly send it to video? Judging by the online reaction, there are at least two possible reasons.”

Both of those reasons bolster the film’s own argument. The first is that it was a little too painfully accurate in its depiction of a future destroyed by the fecundity of the profoundly dumb. The other is that it blisteringly lampoons the marketing strategies of businesses with ties to the all-powerful News Corp. In Idiocracy’s 2505, Fuddrucker’s is memorably called ButtFuckers, Starbuck’s has become a handjob parlor, practically everything is sponsored by Carl’s Jr. (its slogan: “Fuck you! I’m eating!”), and both water fountains and center-pivot crop irrigation systems pump out a green, electrolyte-enhanced sports drink called Brawndo: The Thirst Mutilator.

...The film opens with an explanation of mankind’s downfall: high-IQ people postpone reproduction too long, while idiots—like a trailer park denizen named Clevon, who spreads his genetic material as widely as Genghis Khan—breed like Tribbles. Five hundred years of this have brought us a future in which trash mounts sky high, health care is administered like burgers at a fast-food chain, and intelligence has all but vanished from the species.

...Where Idiocracy laughs at our culture, though, it dares to ask: Are we stupid because business and marketing made us that way? Or did business and marketing take advantage of a trend that was set in motion by other circumstances? When we stroll with the film’s heroes through a Costco the size of an Imperial Star Destroyer, its interior like the cargo deck of a modern container ship, we are forced to wonder whether our own hunger for cheap and abundant crap—“goods” is a misnomer—made this abomination possible.

In the person of President Camacho we find a pointed criticism not only of personality cult but also, per an offhand remark, the kind of nepotism that thrives in corrupt societies. The sloth-like Secretary of Education is, we discover, “kind of stupid, but he’s President Camacho’s stepbrother.”

Yeah I'm not going to support anything associated with Mike Judge (the creator of Beevis and Butt-Head). This guy is one of the creators of the very same kind of idiot parade they talk about in their 'documentary'. As long as he can 'make jokes' and profit, he's good.

I trust Judge about as much as I'd trust Monsanto to create a seed that doesn't react to their own herbicide Round-up. Oh wait ...

Had a long discussion with brother about Catch-22 morphing from a war story to a silly book, to a telling allegory and finally, in present perception, to a user's manual. Frightening.