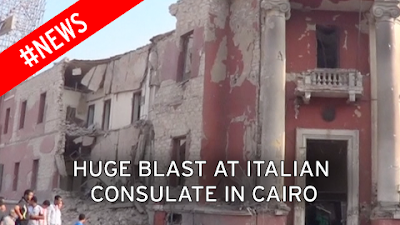 They were ready for the raid by Egyptian cops last month. As the police stormed the apartment building in Cairo's Ahman slum they were met by a series of IEDs. Six officers and three civilians died.

They call themselves "Misr" and they're the local Egyptian chapter of the Islamic State. The worst part is that the brutal military government of Fattah al-Sisi may be driving recruits into Misr's arms.

The Misr network is an ominously peculiar militant creation. It is not designated as an official “province,” an Islamic State-controlled territory, or wilaya, like the group’s Sinai and Libyan counterparts. Yet Misr’s name and the ability of its cells to regroup after being hit hard by police suggest that this offshoot of the world’s most powerful jihadist group is out to threaten stability in Egypt’s heartland. If ignored, it may well achieve it.

Meanwhile, the Sisi regime is continuing its relentless purges of any traces of the once influential Muslim Brotherhood. Like the Cairo police raid, however, the repercussions of the government’s actions could be far worse than expected. Because President Abdel Fattah al-Sisi might ultimately deliver thousands of disillusioned Islamists into the toxic ideological embrace of Islamic State’s “caliphate.”

al Sisi may have overplayed his hand:

The disorganized liberal youth groups that spearheaded the 2011 revolution have failed to find a political voice in a society polarized over demands for security and stability. Meanwhile, the once well-oiled Muslim Brotherhood social and political machine is in shambles. The group’s leaders are either exiled, jailed or dead, and its grass-roots support base left fractured, disenchanted with democracy and on the verge of radicalization.

ISIS may be consolidating its hold across North Africa:

Misr is emerging as the most active and capable militant group in the Cairo area; it has claimed the majority of attacks during the revolution-anniversary period. By attacking police, the group seeks to outbid other antigovernment Islamists and capitalize on discontent fueled by increasing police brutality and enforced disappearances under Sisi’s rule.

Unlike their local competition, Misr cells have physical connections with well-armed and well-funded Islamic State wilayas, or branches, in neighboring Libya. The Sinai province, with the help of Palestinian groups in Gaza, has proven its ability to keep the Egyptian military bogged down and away from the Libyan border, Cairo and Egypt’s industrial heartland in the Nile Delta. Most important, Islamic State continues to hedge its bets that Sisi’s government will fail in its efforts to provide a positive economic and political future for Egyptian youth. This would yield a virtually bottomless pool of potential recruits for attacks at home or abroad.

No one has come out and said as much but the instability in Egypt may underlie Italy's and Canada's recent talk about driving ISIS out of Libya. It's too bad that Harper and his buddies were so instrumental at letting them get a toehold in North Africa.

Like termites, they find new holes to occupy and we keep feeding them, Mound.

Owen is right, we keep feeding the termites. Why?

Toby, you ask why. It's pretty simple. We keep doing the same thing over and over because we refuse to have an honest conversation with ourselves about what's so routinely going wrong. We're like a national automaton that keeps driving into walls. We have come to accept PermaWar without regard for whether we have the will or the means to win. We don't even know what victory might look like much less how to grasp when we've lost.

There's a general failure of both political and military leadership and now they're accustomed to it. It's their normal.

Mound, I think your second paragraph is closer to the problem. As to "we", you and I and Owen and most who post here aren't included. The powers that be have certainly been told that a great many people don't agree with the perpetual whack-a-mole foreign policy but they ignore us. I think it is simply easier to keep playing the American game than to do as you suggest.

The question ought to be "how" not why.