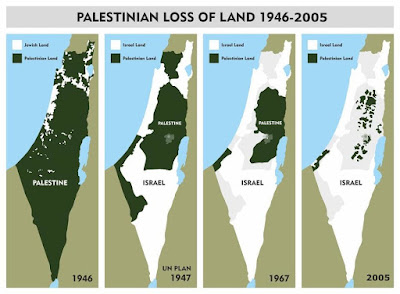 It's called reality and it's the rarest of commodities when Canada's political leadership addresses the subject of Israel.  Mention Israel and they become so gushing that I sometimes fear one of them might drown. It's the perpetuation of myth at its very worst and they're all bleating from the same page. Sheep.

Maybe they should take their cue from the New York Times columnist, Thomas Friedman. He's written what should be a real wake-up call for Mona and Tommy and Justin - Israel has already imposed its own one-state solution. It's over.

Whoever becomes the next president will have to deal with a totally different Middle East.

Start with Israel. The peace process is dead. It’s over, folks, so please stop sending the New York Times Op-Ed page editor your proposals for a two-state solution between Israelis and Palestinians. The next U.S. president will have to deal with an Israel determined to permanently occupy all the territory between the Jordan River and the Mediterranean Sea, including where 2.5 million West Bank Palestinians live.


Friedman notes that there's plenty of blame to go around and that Hamas fullsomely deserves its share.

They all killed the two-state solution. Let the one-state era begin. It will involve a steady low-grade civil war between Palestinians and Israelis and a growing Israeli isolation in Europe and on college campuses that the next U.S. president will have to navigate.

If you're expecting any of Canada's political leaders to have the sand to recognize the obvious, don't hold your breath. Immediately you treat Israel and the Palestinian territories as a one-nation state, you have to explain your tolerance for the enslavement of the Palestinian people in their own homeland. Maybe we'll just turn our back on them as we've done to so many others in so many places.

Your maps at the top tell the story.