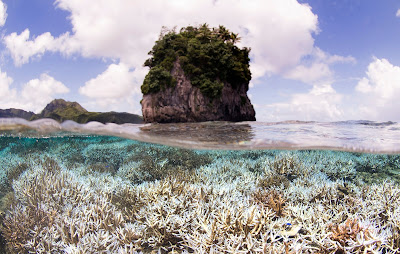 It's only logical that global warming would not spare our oceans. Not only do they absorb most, about 70%, of our atmospheric carbon dioxide, resulting in worsening acidification, but the world's oceans also absorb great amounts of surface heat.

Until recently, oceanic heat waves were almost unmentioned. Welcome to the Anthropocene. We've had them before only now they're more frequent, longer lasting and much more destructive.


The number of heat waves in patches of the world’s oceans have been increasing over the last century, a new study of marine temperature records finds. Not only that, but those marine heat waves are getting longer and more intense, Eric Oliver, a physical oceanographer at Dalhousie University in Nova Scotia, told Seeker.

“Basically, the time that an ecosystem is exposed to what would be warmer-than-average temperatures that might put it under stress at the very least is about 50 percent longer now than it was 100 years ago,” Oliver said.

In recent years, oceanic heat waves have caused the bleaching of much the world’s coral, including a large part of Australia’s Great Barrier Reef. They’ve disrupted fisheries as sea life moves to cooler temperatures, and affected weather on land.

Oliver and his colleagues at universities in Canada, Australia, and Britain have been examining the recurring hot spells since a 2011 event off western Australia. Their latest findings, published in the research journal Nature Communications, found heat waves occur 34 percent more often and last 17 percent longer than they did in the early 20th century — and climate change, driven by the carbon emissions from fossil fuels, is likely to drive those numbers upward further.

After that 2011 event, kelp forests in what’s typically cooler water collapsed and were replaced by sea grass. Fish that made their homes in the area swam away, and coral even took root in places it hadn’t been before. The heat wave only lasted about a month — but after it lifted, some of those changes persisted, Oliver said.

Personal experience suggests that many of us, most perhaps, have at best a weak grasp of the critical role these oceans and their marine life play in our wellbeing, even our survival. These people have an even weaker grasp on the havoc we're visiting on these oceans from atmospheric greenhouse gases, to coastal waters contamination and oceanic dead zones, to the alarming spread of lethal plastics debris to seabed trawling and over-fishing, fishing "down the food chain." It was recently calculated that the fisheries of Asia will be gone by 2048. We are even disrupting essential ocean currents.

Make no mistake about it. As we kill the oceans, they will have their revenge on us. We kill them, we kill ourselves.

And, instead of dealing with a threat, not some supposed challenge to our national interest but to our very survival, we're not slashing greenhouse gases, we're not urgently transitioning off fossil energy. No, instead we're pimping bitumen, ramping up the extraction, transmission and export of the world's most high-carbon, toxic, and hazardous ersatz petroleum product. Tell me how that is in the national interest?

I know my criticism of our man/boy prime minister is sounding like a broken record but I'm going to continue to pound away on him until he begins to heed the warnings and puts the public interest for once ahead of his partisan political interest. Until then he deserves nothing less.

Atlantic Ocean off Nova Scotia at 14C in April.