A Terrible Foreboding. Trump in Meltdown. 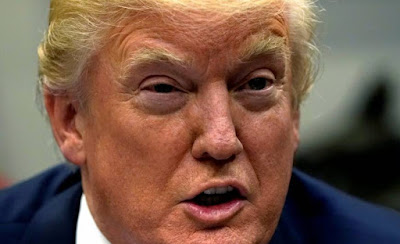 There's never a calm moment when America is ruled by someone as mentally unstable and unfit for office as the current White House occupant, the Mango Mussolini, Donald J. Trump.

These are not good days for that silly bastard. In fact, he's having one hell of a time with so many threats closing in on him from so many directions so quickly. Fortunately Donald has an unlimited supply of disposables, Depends, from Kimberly-Clark, the company that used the Republican tax cuts to fire 5,500 US workers and pump up this year's dividends to its shareholders.

Poor old Trump. His ship is sinking. Everywhere he looks the rats, Congressional Republicans, are fleeing his ship as the water rises from the bilge. Republican House leader, Paul Ryan, can't wait to get out and start pocketing his tax cut payback.

The Sydney Morning Herald reports that, even by Trump standards, the White House tremors this past week have been seismic.

Now Trump himself is muttering the unthinkable - America may try to return to the Trans Pacific Partnership.


it was only a year ago that Trump had pulled out of the TPP as part of his America first agenda, in the strongest possible terms, calling it, “another disaster done and pushed by special interests who want to rape our country”.

His flip on the TPP on Thursday, local time, comes against the backdrop of a brewing trade war with China and the very real possibility of conflict with Russia over plans to strike at Syria over the use of chemical weapons.

The past days have been dark and chaotic in Washington, perhaps best characterised by a profane and despondent tirade by a Republican congressman who snuck off to a local Safeway to unload upon the conservative anti-Trump commentator Erick Erickson.

"It's like Forrest Gump won the presidency, but an evil, really f---ing stupid Forrest Gump,” the anonymous Republican moaned. “I say a lot of sh-- on TV defending him ... We're going to lose the House, lose the Senate, and lose a bunch of states because of him. All his supporters will blame us for what we have or have not done, but he hasn't led.”

In a presidency whose signature feature is constant crisis it can be hard to distinguish moments of true import. But this past week has been one of them - for various tangled reasons - for the president, for his party, for Americans and for the world.

It began with Trump’s personal lawyer being raided by the FBI.

...The raids compounded the substantial legal threats creeping ever closer to Trump, deftly outlined in a single startling paragraph in a New York Timesreport:

“The searches open a new front for the Justice Department in its scrutiny of Mr Trump and his associates: His longtime lawyer is being investigated in Manhattan; his son-in-law, Jared Kushner, is facing scrutiny by prosecutors in Brooklyn; his campaign chairman is under indictment; his former national security adviser has pleaded guilty to lying; and a pair of former campaign aides are cooperating with Mr Mueller. Mr Mueller, meanwhile, wants to interview Mr Trump about possible obstruction of justice.”

The raids also prompted an epic temper-tantrum by the President, according to numerous reports from the White House, which continues to leak like a sieve.

It's bad enough that a lot of seasoned Republicans have decided not to go down on S.S. Trump. He also has to worry about a faction of the Congressional Republicans who are staying put.


Those trying to hold the Congressional Republican Party together fear that if Trump sacks Mueller the party will finally and irreparably split, with the remnants of the so-called “Never Trump” movement potentially even voting with Democrats to impeach the President for obstructing the investigation.

"I think it would be suicide for the President to fire him," the Iowa Republican senator Chuck Grassley told CNN. "I think the less the President says about this whole thing, the better off he will be. And I think Mueller is a person of stature and respected and I respect him.”

...The miserable Republican congressman who unloaded upon Erick Erickson in a supermarket this week laid it out clearly. Congressional Republicans fear they would be destroyed in primary races leading up to the November midterm elections by Trump supporters if they broke ranks too soon, he explained. But come November, and if Mueller is fired, he believes many would move to impeach the president.

“I'd vote to impeach him myself. Most of us would, I think. Hell, all the Democrats would and you only need a majority in the House. If we're going to lose because of him, we might as well impeach the motherf---er. Take him out with us and let Mike [Pence] take over.”

...elements of the party are activating to provide those who support the investigation with political cover. One prominent group of DC conservatives this week announced the formation of the group Republicans for the Rule of Law to lobby Congressional Republicans to back Mueller’s investigation and convince the party’s base that this is no “deep state conspiracy”. Its founding director, Sarah Longwell, told Fairfax Media that she did not know who the Safeway miserablist was - nor why “he chose to use that language “ - but confirmed his view that the future of the presidency depended on allowing due process to continue was common among Republicans in Congress.

Then there's Trump's erratic fumbling on Syria beginning with a threat to launch a barrage of US missiles, "nice and new and 'smart'" that culminated in this tweet:


“Never said when an attack on Syria would take place. Could be very soon or not so soon at all! In any event, the United States, under my Administration, has done a great job of ridding the region of ISIS. Where is our “Thank you America?” he tweeted.

“Emotionally, it’s incredibly dispiriting to see matters of life and death tossed around so lightly,” Paul Musgrave, a scholar of US foreign policy at the University of Massachusetts Amherst told Vox of the messages. “Analytically, it’s horrifying to see a president whose policy-making agenda is set so trivially.”

Which might go some way to explaining the fury of the anonymous Congressman at Safeway this week, who added in his conversation with Erickson, “He wakes up in the morning, sh--s all over Twitter, sh--s all over us, sh--s all over his staff, then hits golf balls.”

Today Trump is in a maniacal rage at previews of James Comey's new book, "A Higher Loyalty: Truth, Lies and Leadership."

"Virtually everyone in Washington thought he should be fired for the terrible job he did — until he was, in fact, fired. He leaked CLASSIFIED information, for which he should be prosecuted. He lied to Congress under OATH," the president tweeted.

"He is a weak and untruthful slime ball who was, as time has proven, a terrible Director of the FBI. His handling of the Crooked Hillary Clinton case, and the events surrounding it, will go down as one of the worst 'botch jobs' of history. It was my great honor to fire James Comey!" he added.

Sorry, Republicans, but, as Bill Maher is fond of saying, "you handcuffed yourself to that dead hooker, you drag her out."

The closer Mueller gets, the more unhinged Trump becomes. What happens when Mueller knocks at Trump's door?