What Do You Do When They Take Away "Job Churn"? The Return of Labour Feudalism. 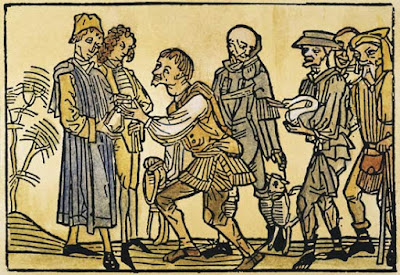 One of the iniquities of neoliberalism has been governmental abandonment of labour.  Harper had a "fill in the blank" approach to quelling labour unrest with back-to-work legislation. He'd just insert the appropriate union's name and get the strike-breaking measure pushed through the Commons with impressive dispatch. Collective bargaining be damned.

Trudeau hasn't been as ruthless with unions but he's certainly indifferent to them. Trudeau's sidekick Morneau lowered the lumber on working class Canadians warning them of a quasi-dystopian future of "job churn." The Liberal government essentially consigned working class Canadians to this new social class, the precariat, populated by people who succumb to the "gig economy" of short term employment, hopping from job to job, hoping to hang on between jobs, living paycheque to paycheque. Do you want fries with that?

When I set up this blog twelve years ago I looked for something that would capture what I hoped to achieve, my purpose. I chose "dedicated to the restoration of progressive democracy." Canada, to me, seemed to be turning away from progressivism as I understood it. That, sadly, hasn't changed.

The Tories expunged "progressive" from their name as though it was something shameful or antiquated, perhaps a sign of weakness.  Many Liberals still choose to wear the laurels of progressivism by virtue solely of being somewhat to the left of the Conservatives. The NDP, they don't know what in hell they are since the Layton/Mulcair era.

Progressivism is labour oriented. Abraham Lincoln declared labour "the superior of capital" in the progress of the American nation. Theodore Roosevelt, echoing Lincoln, observed that it is the function of a progressive democracy to regulate and balance the eternally competing interests of labour and capital, but always giving labour some overall advantage. Why? Because that was indispensable to the health of the nation state.

Lincoln pulled no punches when he stated:


“I hold that while man exists it is his duty to improve not only his own condition, but to assist in ameliorating mankind.”

To this, Roosevelt added:


At many stages in the advance of humanity, this conflict between the men who possess more than they have earned and the men who have earned more than they possess is the central condition of progress. In our day it appears as the struggle of freemen to gain and hold the right of self-government as against the special interests, who twist the methods of free government into machinery for defeating the popular will. At every stage, and under all circumstances, the essence of the struggle is to equalize opportunity, destroy privilege, and give to the life and citizenship of every individual the highest possible value both to himself and to the commonwealth.

Practical equality of opportunity for all citizens, when we achieve it, will have two great results. First, every man will have a fair chance to make of himself all that in him lies; to reach the highest point to which his capacities, unassisted by special privilege of his own and unhampered by the special privilege of others, can carry him, and to get for himself and his family substantially what he has earned. Second, equality of opportunity means that the commonwealth will get from every citizen the highest service of which he is capable. No man who carries the burden of the special privileges of another can give to the commonwealth that service to which it is fairly entitled.

The declarations of Lincoln and Roosevelt are as relevant today as they were at the end of the Civil War or the beginning of the 20th century. The prime objective of progressive democracy has to be the advancement of the public interest, not special interests. This glib assumption that the wellbeing of the corporate sector is synonymous with the wellbeing of the public is not true unless both are properly regulated by a progressive government. Unfortunately for most Canadians one of the crushing realities of globalized free trade is the gratuitous surrender of our government's sovereign power to regulate that balance whether it be a matter of health and welfare, labour rights or environmental regulation. If we deign to place the public interest over the special, corporate interest we risk getting sued for damages.

All of which now leads me to something I want you to consider. It's an article in Vox on a new trend, the rise of "monopsony," the condition whereby employers acquire a monopoly position over labour and worker's salaries. This is the emerging wasteland left over from the war to subdue organized labour.  Please, take a few minutes and read it and then ask if this neoliberal end game is something we can accept for our children and theirs? Or is it time to stop going along with this neoliberal order and begin pressing for the restoration of progressive, liberal democracy?

Oh yeah, one other thing. If you think my remarks alarmist, a new study finds the richest 1% are on track to control not half but two-thirds of the world's total wealth by 2030.
Posted by The Mound of Sound at 10:11 AM

Essentially, this is why I dislike trade deals as put together so far. They lower standards, including labour. A good international deal would raise wages and standards.

"Capital is only the fruit of labor, and could not have existed if labor had not first existed."
An ultimate truth, both literally and idealistically. Plus, great metaphor on top of that.
Of course I've always hated the "bottom line" mindset from the get-go, so I may be just expressing my own personal bias here ...

...if the only objective is to "make money" why bother with a legitimate business at all?
Why not simply engage in bootlegging, or drug-dealing, or embezzlement, or contraband and gun-running, or join a criminal gang and engage in extortion, murder-for-hire, arson-for-hire
...if "making money" is the prime criteria?

An excellent piece, Mound. Obviously, "free markets" are not free.

Coincidentally, Mound, a friend of mine sent me the link to the Vox article this morning. Sobering reading indeed.