What Better Way to Begin the Week 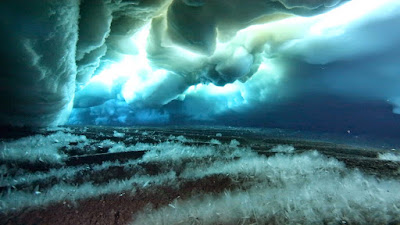 How better to kick off the work week that with the latest climate change news. Will it be good news? Will it be bad? Are you kidding, of course it won't be good and it's not.

That big slab of ice and snow most of us think of when we hear the word "Antarctica" is melting much faster than satellite images led us to believe. That's because it's not melting much at the top but it is melting muchly at the bottom, way, way down where the satellites can't see.


Until recently, the Antarctic was seen as relatively stable. Viewed from above, the extent of land and sea ice in the far south has not changed as dramatically as in the far north.

But the new study found even a small increase in temperature has been enough to cause a loss of five metres every year from the bottom edge of the ice sheet, some of which is more than 2km underwater.

“What’s happening is that Antarctica is being melted away at its base. We can’t see it, because it’s happening below the sea surface,” said Professor Andrew Shepherd, one of the authors of the paper. “The changes mean that very soon the sea-level contribution from Antarctica could outstrip that from Greenland.”

The study measures the Antarctic’s “grounding line” – the bottommost edge of the ice sheet across 16,000km of coastline. This is done by using elevation data from the European Space Agency’s CryoSat-2 and applying Archimedes’s principle of buoyancy, which relates the thickness of floating ice to the height of its surface.

So I guess the message is, "Greenland, enjoy that top spot while you can. Your days are numbered. The Big Dog's coming to town."

Did you know that Antarctic Ice extent was at a record high only 4 years ago?

This "suppressed news" was flung in my face as I was called a warmist by a well educated, intelligent relative of mine. The insult only stung a bit cause of the source and I was intrigued as it seemed highly counterintuitive to my own understandings.

I did some research and discovered
* it was not 'multi-year ice' ie - it disappeared in the summer months.
* the most likely explanation had to do with high rates of runoff from surface melt and changing winds (both as the result of - you guessed it: climate change)

I did not raise this with my accuser (the second point would obviously set him off again) until we had record lows for Antarctic Ice extent in 2017: The record low, I acknowledged to him, had about the same significance as the record high (ie not much) .... his original point was the result of misinterpretation and all the subsequent information we learned about how Antarctica is being melted away at its base should surely set him straight. I resisted calling him a denier. Stony silence was my answer.

On another note, a good friend of mine (an aging lazy leftie who fully acknowledges climate change and knows better) recently replaced his 10 year old diesel ... with a brand new diesel. I am sooo depressed.

We may be heading toward the most elaborate mass suicide in the history of any species. We have to deal with this stuff but our collective leadership is totally ignoring it. I think the core of the problem is that it is so difficult to positively connect specific weather events to man-made global warming. The small minded can't or won't see the big picture until it nails them personally.

Do you think a string of class 5 tornadoes over Ottawa would get Justin's attention? Or would it simply be another opportunity for photo ops?


I expect you'll realize from the sardonic tone of my writing that I've reached a stage of recognition that we could get reports like this, even worse, several times a day and the reaction from the public and their leadership would be "too bad, so sad."

There is a tipping point past which public apathy will be displaced by public fear and clamouring for action. I've been awaiting that tipping point for many years and there's still no sign of it on the horizon. When the mood shifts and we're moved to action we will still have a good 20 up to 30 years to implement effective change to decarbonize which reflects how deeply fossil energy is embedded in our societies and economies and the inevitable bueaucratic foot dragging for research, analysis, policy and planning, financing and implementation of a switch to clean energy. We're much more concerned about possibly collapsing the economy than we are collapsing civilization itself for future generations. That sounds utterly venal but only because that's exactly what it is.

Mound, you often widened the frame to the whole question of 'population sustainability'.

Lisa Krall has a wide frame view of this you might find interesting...
https://evonomics.com/ecological-economics-superorganism-lisi-krall/

"What it means to live a meaningful life and how do human beings — and I’ll use Wes Jackson’s words here — once again become a “species in context.” Because Wes says that with agriculture we became a species out of context. And he’s right. Our job here is not simply to map out a road to some kind of vague sustainability with renewable energy. That’s not what we want to do. It’s not going to be enough either. It’s not going to be enough and it’s not where we want to end up."

The freakiest part about all this subsurface melting is that those big ice sheets are going to be less and less firmly grounded, accelerating a lot of the stuff we've already heard about massive pieces of the continent gradually sliding into the sea. When it comes to sea level rise, it doesn't much matter if Antarctica has actually MELTED yet if half of it is bobbing in the ocean, displacing its weight worth of water.

When we face a problem these days, we're paralyzed. We don't want to pay the price required -- so we'll pay a much heavier price later.


I think the advent of agriculture, NPoV, was sustainable until we coupled it with fossil energy. Prior to the age of coal agriculture allowed us to develop civilization but it was still constrained by nature. Cities could only grow to the extent their people were able to be fed and sustained by nearby farms. Farmers were mainly smallholders, limited by their horses and oxen, as to how much land they could work.

Fossil energy allowed us to grow from 1-billion to 2.5 billion in less than 140 years and mechanized, industrial agriculture saw us explode from 2.5 billion to today's 7.5 plus billion in under 70 years. We grew to such numbers because we could produce enough affordable food to support that many, more or less.

And how many today are in genuine pursuit of "meaningful life"? We have off-the-shelf substitutes for that now - televisions, the internet, smartphones and tablets - the material life that we so love or imagine we love.

PLG, I'm a short block from the ocean as it is. Perhaps, within my lifetime, I'll have a waterfront home. As Python would chime, "always look on the bright side of life."


If only, Owen. No, we're not expecting to "pay the price" later or any other time. We expect to be in the arms of Morpheus enjoying the eternal dirt nap by the time the bill shows up.