On the Other Hand... Climate Change News 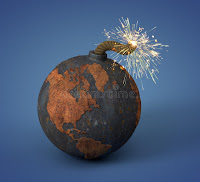 The critters are beginning to panic. This time they're scurrying around muttering about "geosolarengineering." That's an awkward term for pumping massive amounts of stuff, aerosols the odds-on favourite, some 20 kms. up into the sky in the hope it will make clouds sufficiently more reflective of the sun's rays to abruptly halt global warming, perhaps even return surface temperatures to what they once was.  A couple of guys from Harvard are ready to launch a high altitude balloon to test the idea.

Ten years ago the scientific consensus held that geoengineering was foolish. The main criticism was that it might bring benefit to one area but at the cost of devastation to other regions. It was also dismissed as addressing only one aspect of the climate change threat, a band aid solution at best. Others argued it would only encourage even greater consumption of fossil fuels.  The widely held conclusion was there's no easy fix for climate change. We must abandon fossil fuels and decarbonize our civilization.

That was then, this is now. The Carbon Enlightenment has not happened. There's dwindling confidence it will, at least not in time. The clock is running down so we have to reconsider what we knew was crazy not that long ago.  That, to me, speaks of panic.

Here's the problem. Imagine the cartoon cannonball with the burning fuze. Now imagine that same cannonball only with a half dozen fuzes coming out from all directions. So, you've come up with a risky idea to put out one of those burning fuzes. Good for you but that shell is still going to blow.

Take this example. You find a way to reflect sunlight back into space, sort of like what all that ice and snow in the Arctic used to do when the Arctic still had all that ice and snow. You've done nothing about our atmospheric greenhouse gases, especially CO2. About 70 per cent of that atmospheric CO2 is absorbed into the world's oceans. As the carbon dioxide is absorbed it acidifies the sea water, a process that is believed to have contributed if not driven five of Earth's mass extinctions. Paleontologist Peter Ward, author of "Under a Green Sky," sums it up in just one paragraph:

First, the world warms over short intervals of time because of a sudden increase of carbon dioxide and methane... The warmer world affects the ocean circulation systems and disrupts the position of the conveyor currents. Bottom waters begin to have warm, low-oxygen water dumped into them. Warming continues, and the decrease of equator-to-pole temperature differences reduces ocean winds and surface currents to a near standstill. Mixing of oxygenated surface waters with the deeper, and volumetrically increasing, low-oxygen bottom waters decreases, causing ever-shallower water to change from oxygenated to anoxic. Finally, the bottom water is at depths were light can penetrate, the combination of low oxygen and light allows green sulfur bacteria to expand in numbers and fill the low-oxygen shallows. They live amid other bacteria that produce toxic amounts of hydrogen sulfide, and the flux of this gas into the atmosphere is as much as 2,000 times what it is today. The gas rises into the high atmosphere, where it breaks down the ozone layer, and the subsequent increase in ultraviolet radiation from the sun kills much of the photosynthetic green plant phytoplankton. On its way up into the sky, the hydrogen sulfide also kills some plant and animal life, and the combination of high heat and hydrogen sulfide creates a mass extinction on land. These are the greenhouse extinctions.

To me, geosolarengineering, is an act of desperation. It's akin to having your house on fire and fighting the flames only in the kitchen. If we have any hope of transitioning to alternative, clean energy, geosolar projects may encourage consumption of fossil energy and at least buy the energy giants, with their 27-Trillion dollars of proven fossil reserves, a lot of time to keep producing.

Geosolar will do nothing to address our already dangerous levels of ocean acidification, the poster boy of mass extinctions. It will do nothing helpful and probably worsen two other existential threats: overpopulation and over-consumption of our planet's finite resources.

We have to realize that cheap and abundant fossil fuel energy underlies every existential threat facing not just humans but most life on Earth. It allowed us to grievously injure the environment. It allowed us to massively overpopulate the planet and it allowed us to rapaciously devastate Earth's very finite resources that are fast running out.

There is but one solution to these problems. That is to get our population down to three, probably no more than two, billion humans. Given the already degraded state of Earth's ecology, we need to shed upwards of five billion people. I don't think it's pessimistic to suggest mankind probably will have shrunk to two billion by the end of this century. That might even be optimistic. Either we do it as a community of nations co-operatively while that option is still open to us or nature will do it in a manner beyond our control.

The human desire for a deux ex machina goes back thousands of years, Mound. A foolish concept then, it is even more so in our current fraught world.


I expect there'll be a lot more deux ex machina before long, Lorne. Geosolar is putting the atmosphere on life support. We'll also need some sort of fix for ocean acidification, soil degradation, our broken hydrological system and various other physical challenges.

Each one of these "fixes" speaks to our unwillingness to implement genuine change. Each of them aims to keep the party going.

.. we're in a new and radically evolving era of information (hardly news to you) It helps be a speed reader with excellent filtering skills. The downside is the disinformation troops are out there, creating what I call horseshit salad. Every day we get besieged with facts, noise nonsense - and fundamental science and biology get nailed & run over like a hit and run. Politicians get evasive and clever with talking points.. and skillfully steer around the potholes of flawed partisan thinking and the fact they are captured sellouts. When is the last or any time a Canadian 'politician' spoke about overpopulation. No its always about the mythical evergrowing 'economy' and high paying jobs jobs jobs.. and getting Canada's resources to market.. blah blah woof woof. I don't have high hopes for any of our current crop of 'public servants'


Sal, I don't know if ordinary Canadians could must the collective will to support the critical changes. We can harp on overpopulation but not without inviting criticism from the overpopulated countries about our over-consumption of resources, including energy. Both camps need to drastically shrink their environmental footprints and neither camp has any appetite for making the essential changes to bring human civilization back within the finite boundaries of our environment. Without that mutual collaboration all the rest of this geoengineering is just tinkering. And the band played on. Nearer my God to Thee.

I don't really know that "overpopulation" is really the problem. I bought a clapped out, overgrazed ranch in the interior of BC. I went from no income, to a viable farm, by simply putting in the work, using organic methods, french intensive and boundary methods, and building the soil.

Our power comes from wind and solar, and if I were doing the install today, I could install 3x the system for the same price.

I havn't even tried to "monetize" carbon offsets.

This summer, the big project is to put in Peruvian Pit Greenhouses, and a water feed, so we can grow market crops all winter, off passive solar and "geothermal", ( dug below the frost line).

But then, when we lived in Maple Ridge, we didn't buy much produce, fruit, vedge or eggs, due to raised beds and a couple of chickens on a suburban lot.

Come to think of it, a long time ago, when I lived on the Drive, in a 3rd floor Apartment, didn't buy any herbs, carrots, onions, salad greens or tomatoes either.

The only geoengineering worth chasing, is carbon capture.

Jay, what I was trying to convey is that much of the world falls into one of two camps: the overpopulated and the overconsumptive. Canada, like most of the developed world, falls into the second camp. We consume far more than our "fair share" of the world's resources, especially fossil energy. I regularly get comments pointing fingers at the overpopulated countries as the real ecological problem.

It's a finite planet that can only sustain a limited human population. We now consume renewables by a factor of 1.7 and increasing with each passing year. We do that by raiding the Earth's dwindling resource reserves. We have grown our economy well beyond the Earth's carrying capacity. Whether you consider Earth a spaceship or a lifeboat, our excessive ecological footprint is not survivable. It's estimated we have so encroached on nature that we've reduced stocks of wildlife, marine and terrestrial, by half in just the past 40 years. And yet in the halls of power around the world that issue doesn't even come up in discussion. If it did we would have to abandon perpetual, exponential growth and the idea of that is heresy even to "enlightened" leaders such as Trudeau.

Canada stands with just a handful of other nations that remain in ecological surplus but that results from the vast size of our territory coupled with our minuscule population. That does, however, take some of the wind from the sails of those who believe that continued growth is now a problem, not a blessing.

If you take GDP as a function of resources, production, consumption and waste, you have the formula for our civilization's downfall. Now that we've mastered the dark art of anthropogenic climate change, we've entered the realm beyond economic collapse and into possible extinction. Yet no leader or group of leaders has the courage to address that.

Every nation on the planet, with the exception of a lucky half dozen, is living in ecological deficit, overshoot (a condition I've chronicled at length on this blog). For some that's a result of overpopulation. For others it results from rapacious excess consumption. Both camps need to initiate what James Lovelock once termed "sustainable retreat." The alternative is self-destruction. It's really as simple as that.