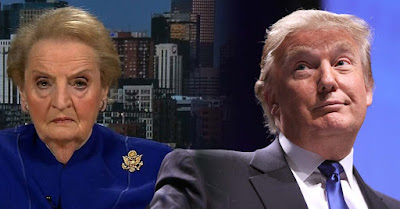 Former US secretary of state, Madeleine Albright, is gunning for the bestseller list with the release next week of her book, "Fascism - a Warning." In it Albright surveys the rise of authoritarian leaders and parties in Russia, the Philippines, Hungary, Poland, Germany, Italy and, yes, her own United States.

In a recent interview with American public radio NPR, Albright concedes that yes, the title is alarmist. It is intended to be, she explains. She was inspired by that phrase deployed across Western democracies in this age of terrorism, “If you see something, say something”. Albright has seen quite a lot in the Trump administration, and she has a lot to say.

“We have never had a president, at least in the modern era, whose statements and actions are so at odds with democratic ideals,” she writes in her chapter on the US. “[Donald] Trump has spoken harshly about the institutions and principles that make up the foundation of open government, in the process he has systematically degraded political discourse in the US, shown an astonishing disregard for facts, libelled his predecessor, threatened to lock up political rivals, bullied members of his own administration, referred to mainstream journalists as enemies of the American people, spread falsehoods about the integrity of the US electoral process, touted mindlessly nationalistic economic and trade policies and nurtured a paranoid bigotry toward the followers of one of the world's foremost religions.”

Fascism, she says in the interview, approaches us one step at a time, even in countries with strong democratic institutions and traditions, “and in many ways goes unnoticed until it's too late”.

Albright is not the only prominent commentator to sound such dire warnings about the Trump administration. Last year the polemicist Andrew Sullivan wrote an apocalyptic essay for New York Magazine in which he cast back to the first book on politics, Plato’s Republic, to illustrate what he saw as the potential for a contemporary American descent into tyranny.

Plato observed that the longer democracies existed - the longer their freedoms and equalities extended - the more incoherent they became, leaving them susceptible to the cynical corruption of a tyrant, who “offers himself as the personified answer to the internal conflicts of the democratic mess. He pledges, above all, to take on the increasingly despised elites. And as the people thrill to him as a kind of solution, a democracy willingly, even impetuously, repeals itself".

Sullivan’s argument was chilling and, set to stark graphics and a hypnotic soundtrack online, even darkly thrilling.

But applying ideas like Sullivan’s - or Plato’s or Albright’s - to contemporary America is difficult because the Trump administration resists definition. It is a twitching, impulsive tachycardic mess; a movement without substance or identifiable intent, let alone ideology. The journalists that have covered it - and this has been a golden era of American political journalism - have tripped over one another as they navigated the miasma of incompetence and trough-snuffling that Trump presents them with, allowing the administration to obscure each catastrophe with the next.

And the very reason behind "the rise of authoritarian leaders and parties" is:


There's a link in the second last paragraph to Andrew Sullivan's video. You should watch it.

I have expected a different answer, Mound.
The elites were despised in the time of Plato and are despised now in USA (and elsewhere) for a reason. Not because of envy/jealousy though, but since they usurped the right to govern us un-democratically.

A "strong man" is just a symptom. Same as rising sea levels are due to the global warming or pain is a symptom of cancer. Going after a symptom is pointless and Ms. Albright certainly knows that.